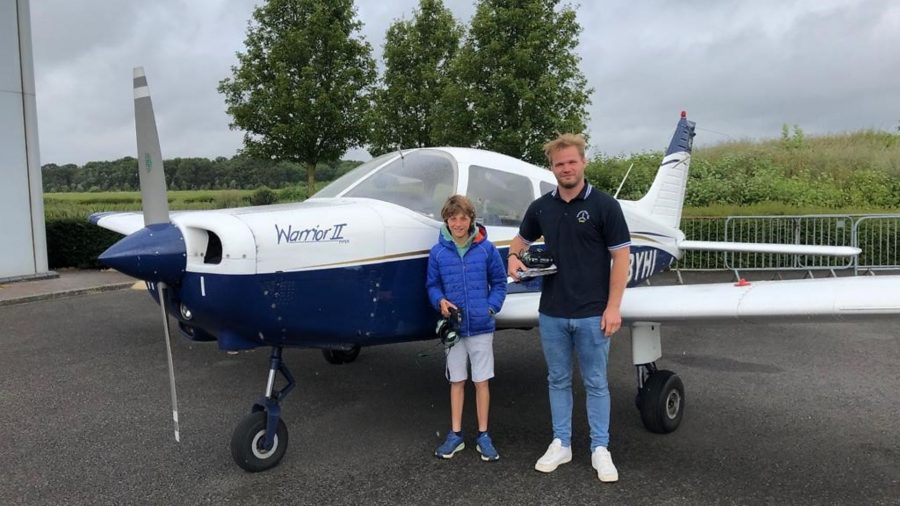 When judges including Pilot’s editors selected the UK winners for the FAI/LAA Aviation Art Contest in February 2020 they had no idea that it would be more than eighteen months before the LAA would be able offer the winners their prize of a flight in a light aircraft!

Henry Bean was eight years old when he submitted his winning picture in the Junior category and he had to hold on to the excitement of an anticipated flight until after his tenth birthday. On 8 August Henry arrived at Turweston with his family and, thanks to Turweston Flying Club, took to the skies in one of the club’s Piper Warriors. With his mum in the back and instructor Toby in the right-hand seat, Henry confidently took the controls in flight and the huge smiles on the faces of mum and son on landing said it all!

Having enjoyed his first flight in a light aircraft Henry carried on with his tour of the hangars where, without hesitation, he identified aircraft types and checked on his phone to see if any arrivals were due. “It was a pleasure to meet this talented young man,” says contest organiser Anne Hughes “and we look forward to seeing our other prize-winners later on. Thanks are due to the LAA for funding the flights.” Earlier in August the LAA and the Guild of Aviation Artists announced it would be facilitating the UK’s fifth annual Art Contest for young people aged six to seventeen. The theme this time round is ‘design your perfect aircraft’ and the closing date for entries is 31 January 2022. Prizes in each age category (6-9, 10-13 and14-17) include art equipment and an opportunity to meet the UK’s top aviation artists in London.

The prize-winning UK paintings will be entered in the International Competition, run by the Federation Aeronautique Internationale, and will be forwarded to Lausanne to compete with entries from across the world. In Olympics fashion, winners receive bronze, silver and gold awards.

For information, rules and eligible artwork sizes, follow this link  or visit www.lightaircraftassociation.co.uk/art