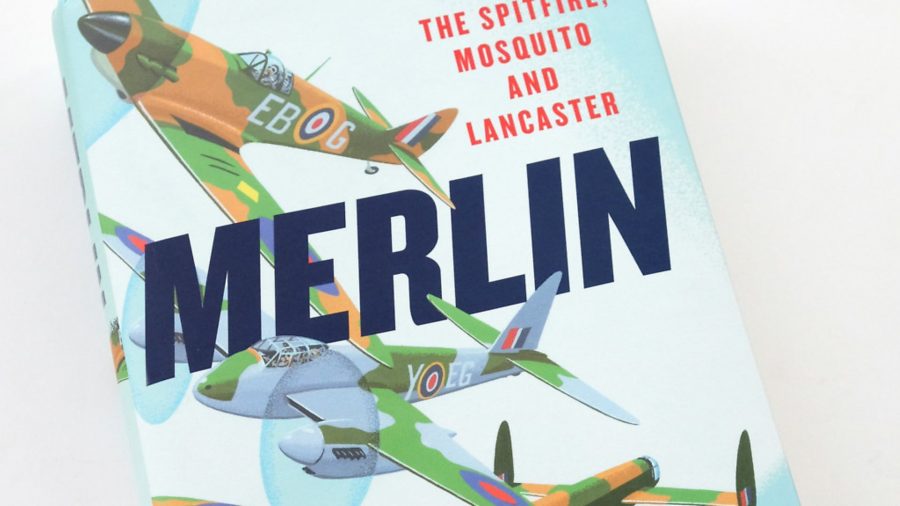 A thoroughly researched hardback book: Merlin – the power behind the Spitfire, Mosquito and Lancaster by Graham Hoyland

Thoroughly researched, salted with wit and written in the best professional style by an author who is both knowledgeable and enthusiastic about his subject, Merlin paints a finer, more detailed and complete portrait of the aero engine and the people who made it than almost any other single volume on the subject. Indeed, you would have to have read widely to find much of the ground covered by Graham Hoyland familiar – and even if you have and do, there will be new discoveries here in a story told in entertainingly meandering fashion, involving one fascinating digression after another.

Much of the early part of the book is devoted to Henry Royce, the engineer responsible for the company’s genius, not in inventing things, but in developing and refining them. From Charles Rolls and Claude Johnson (‘the hyphen in Rolls-Royce’) came the connection with customers and people in influential positions that gave the company such advantage. Thus, it was that R-R armoured cars came to be used by the British Army (and notably T E Lawrence, the subject of one of those many illuminating digressions) and the company’s developments of German and US engine designs won out against the technical brilliance of competitors like Napier.

As Hoyland explains, the Merlin really did represent a triumph of tireless, thorough development over poor initial design (unlike some of Rolls-Royce’s failures, including the ‘X’ configuration Vulture the Avro Manchester was designed around). Even the company’s reputation for quality was based not on precision machining, but painstaking, selective assembly on the production line. It was only when the Americans made Merlins that dimensional tolerances were reduced to mass production standards and true component interchangeability was achieved.

However, in many other respects – not least supercharger design – Rolls-Royce and the Merlin led the way, and this Graham Hoyland makes clear by setting company and technology in context, covering competitors like Daimler-Benz and its DB601 engine in detail.

It really would have been nice to have a few more illustrations and just occasionally the author’s mastery of the technicalities proves incomplete (I don’t think ‘shock waves’ played any part in the Supermarine S4 wing failure) but these are ultimately minor flaws in a super, illuminating and entertaining piece of writing by anybody’s standards. A paperback edition is due out in May. PW