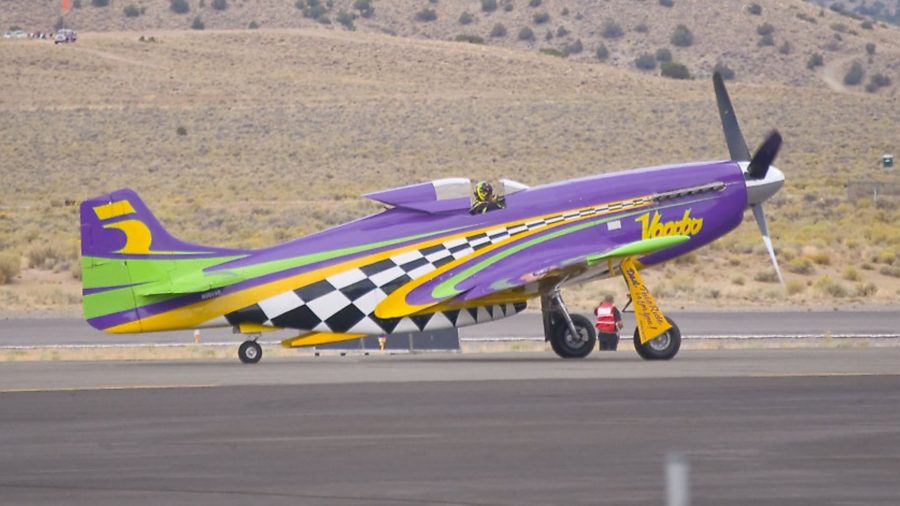 Hinton will be attempting the record in ‘Voodoo’, the P-51 Mustang that he has piloted to three Unlimited-class titles at the Reno Air Races.

Following an attempt to break Lyle Shelton’s 28-year-old record on 28 August, Steve Hinton jnr is having a period of downtime to work on ‘Voodoo’ after mechanical issues forced an early landing. Another attempt is expected soon at an undisclosed Idaho location.

The piston-engined record currently stands at 528.3 mph, a standard set by Shelton in the Grumman Bearcat ‘Rare Bear’.

Hinton jnr has heavily modified ‘Voodoo’ for the attempt, even removing its distinctive purple paintjob for the occasion.

At thirty years old, ‘Steve-O’ is three years older than his father was when he broke the record in 1979 flying the highly modified P-51 ‘Red Baron’.

The attempt was due to be made on 27 August but poor weather conditions meant it had to be postponed until the next day.

Speaking to camera specialist Shotover prior to the first attempt, Hinton jnr was in a positive mood: “This is an incredible opportunity and one that I have prepared very hard for over the last year,” he said.

“I have a great team around me and a remarkable aircraft and am confident that we will make a strong run at this record.”

Pursuit Aviation, an aerial cinematography company who worked on the hit film Dunkirk, are providing regular updates and live footage of the attempt on their Facebook page.

They are filming the flight using a Shotover F1 System that promises to deliver some astounding footage even if Hinton jnr is unsuccessful.

Dan Friedkin, founder of Pursuit Aviation, also spoke to Shotover about their preparations: “It has taken multiple test flights and extensive engineering to create a system that can withstand the extreme speed and force required for Steve to break this record.

“The unique vantage points and quality of the video captured will be unlike anything that has been recorded at these speeds.”