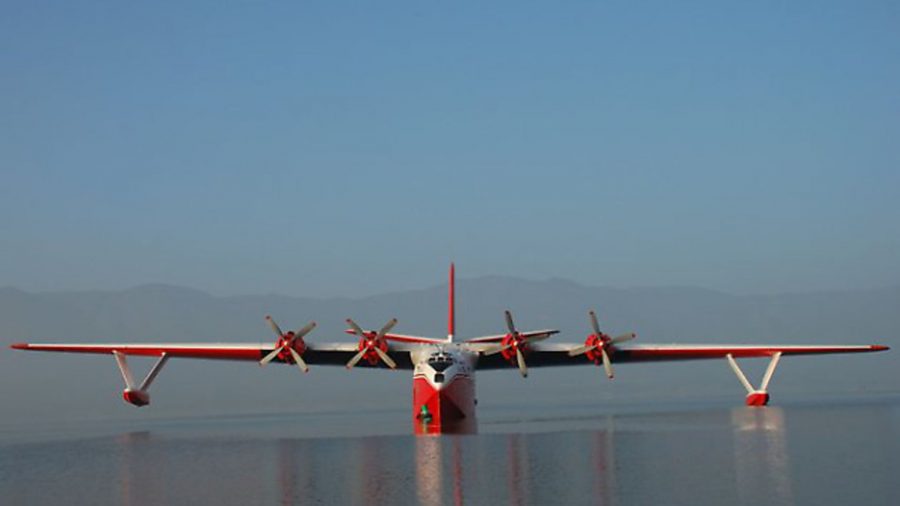 Converted to a fire-fighting role, the aircraft is the world’s largest operational water bomber. Originally, six of the Mars flying boats were constructed for the US Navy to use during the Second World War, built to transport freight and troops between America and Hawaii.

After the war, the aeroplanes were converted into water bombers that are capable of carrying over 27,000 litres of water – enough to cover four acres of land in just one pass! The sole airworthy survivor is currently based at a lake in Oshkosh, Wisconsin so that it could appear in the EAA’s AirVenture airshow.

One of the most common questions asked about the Mars is how it collects the water – and the answer is down to incredible teamwork among the crew.

The captain executes a normal water landing, keeping the aircraft ‘on the step’ and allows the speed to decrease to seventy knots. He then passes engine power to the flight engineer and selects the scoops to the ‘down’ position.

The ram pressure for scooping water into the tanks is such that the aircraft is taking on water at a rate in excess of one ton per second. To account for this added weight, the Flight Engineer must advance the throttles to maintain a skimming speed of sixty to seventy knots to ensure the aircraft remains on the step.

In total, collecting the full capacity of water takes approximately 25 seconds. Once the tanks are full, the captain will raise the scoops, call for takeoff power from the flight engineer and carry out a normal loaded takeoff.

The Mars’s owner, Wayne Coulson, reportedly said he had decided to put the plane up for sale after the governments of British Columbia and Alberta did not offer his firm contracts during the latest wildfire season.