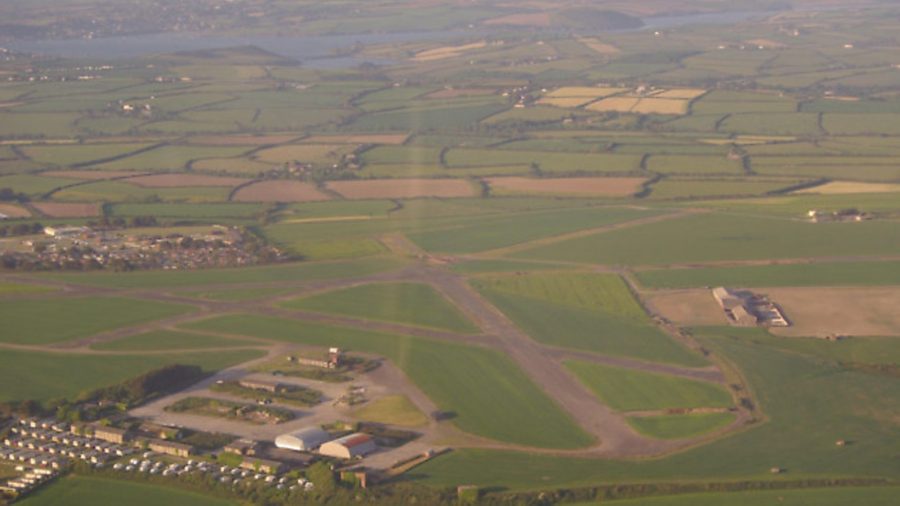 In spite of lengthy protests from the operators of St Merryn Airfield on the north Cornwall coast near Padstow, a wind turbine is being erected within the airfield flying circuit.

In July 2011, an energy company applied for planning consent to erect an anemometer mast within

the flying circuit at St Merryn Airfield, which is marked as “private” on the O/S location

map submitted as part of the planning application. Specific warnings were issued by the Civil Aviation Authority to the

Local Planning Authority, but the airfield operator has said it was not notified or consulted on the application.

Then, in October 2011, the energy company applied for planning consent for a 54m wind turbine, less than 1,000m from the airfield. Again, the operator was apparently not notified or consulted, and in May 2012 planning consent was granted for the turbine.

St Merryn Airfield is an historically significant aerodrome established in the late 1920s by the widow of William Rhodes Moorhouse VC, the first pilot ever to be (posthumously) awarded the Victoria Cross in the early days of the First World War.

Naval Air Station, operational by 1943 and known as HMS Vulture. The MOD disposed of the

of his agricultural holding.

Several vintage aircraft were restored at St Merryn during Bob’s tenure, including the celebrated

Grace 2-seater Spitfire. The airfield was approved as a gyrocopter training facility in the 1970s and

for 25 years was a home to a successful parachute club.

Flying has been continuous since Bob acquired the facility and a number of light aircraft, gyrocopters, microlights &

motor gliders are resident at the airfield.

Although Bob Partridge died in early 2012, the executors of his estate learned of the planning

contravention of Civil Aviation Authority safety guidance if it was to be sited in the planned location, and requested that it be put elsewhere on the landowner’s 200-acre farm.

Despite repeated requests over the next two years for safety assessments to be made, work on the wind turbine began at the beginning of February 2015.