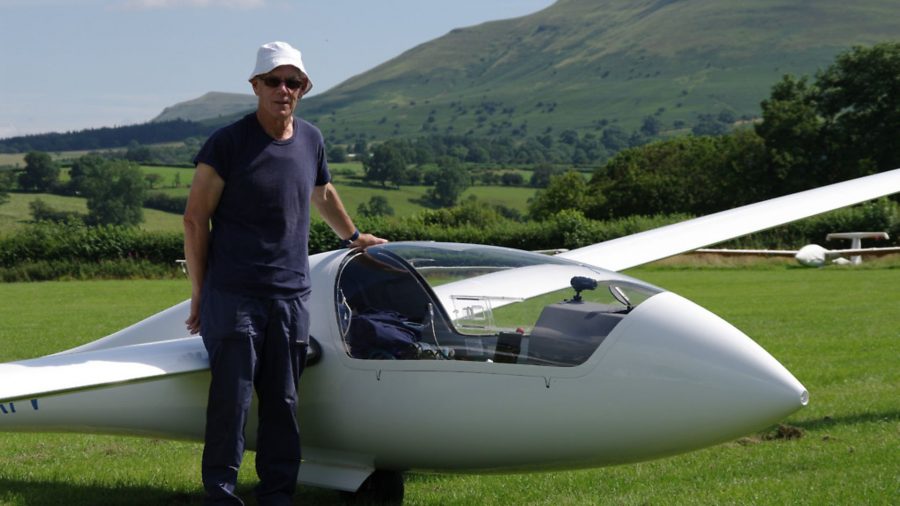 This remarkable flight followed a route (or task as glider pilots refer to it) comprising the following turn points: Talgarth to Edgehill to Builth Wells to Swalcliffe and back to Talgarth. The total task distance flown was 503.4 km.

There have been very few 500km glider flights from Talgarth. The first was flown during the 1980s by Paul Steiner in a Janus glider. Several 300 km flights were also made from Talgarth that April day. There were few airspace constraints then compared to today.

After his flight Dave McCarthy commented: “At the beginning of this year my wife asked me what my ambitions were and I said that one was to do 500km from Talgarth because I didn’t think many people had achieved this.

“When I saw the weather forecast I knew that I had to have a go. It was a difficult day for me finding the good lift and the sky was nearly blue in Wales which didn’t help a lot. I got low at Malvern after the first turn point at Edgehill and was wary for the rest of the flight, trying to stay high.

“But when I was 50 km out I felt fairly confident that I was actually going to get home despite the weakening lift. A flight to remember and my fourth 500 km flight in a Mini Nimbus.”

Glider pilots can make such long flights without an engine by using thermals – Rising currents of warm air triggered by heating from the the sun. By climbing in thermals and gliding between them, pilots can travel surprisingly long distances across the countryside.

The longest non-stop glider flight in Britain is 1,020 Km – almost the equivalent of flying from London to Edinburgh and back. The highest altitude a glider has been in the UK is 37,000 feet while modern gliders can fly at speeds exceeding 150 mph.

If you are interested in trying out gliding for yourself: Black Mountains Gliding Club offer trial lessons flown in dual controlled gliders with qualified instructors. To book please contact the club directly via their website: www.blackmountainsgliding.co.uk