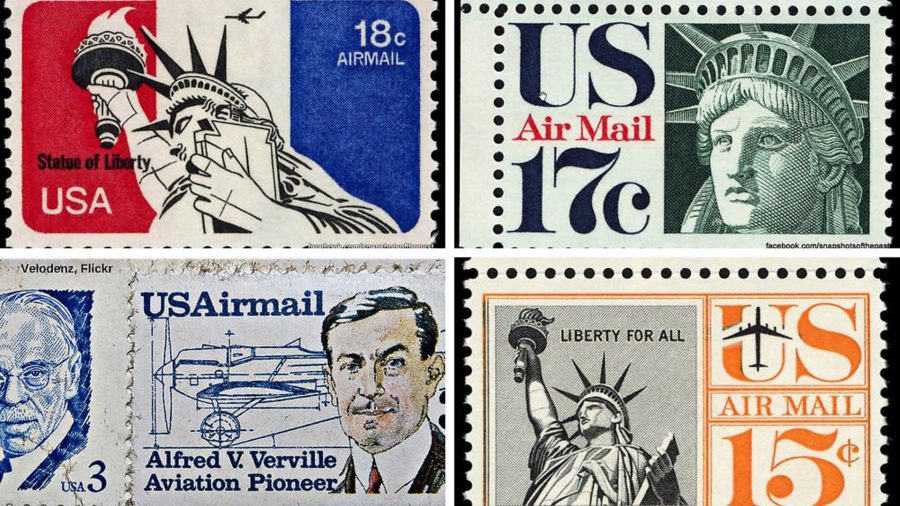 The U.S. Postal Service celebrates the 100th anniversary of the beginning of regular airmail service with a Forever stamp. This stamp celebrates the courage of the pioneering airmail carriers and the foresight of those who fostered the new service and made it a success.

“The stamp we’re here to celebrate is a beautiful reminder of the imprint of United States Air Mail on today’s world,” said U.S. Postal Service Vice President of Supply Management Susan Brownell who dedicated the stamps.

Brownell spoke of how this groundbreaking service is credited with establishing the foundation for America’s modern-day aviation industry.

“The Wright brothers opened this country’s eyes to what could be possible,” she added. “Fifteen years later, with the first airmail flights, the Post Office helped turn that possibility into reality.”

A second stamp, red and pictured below, will be issued in College Park, MD on Aug.11, 2018. The stamp will commemorate United States Air Mail as an official function of the Post Office Department.

Both stamps depict the type of plane typically used in the early days of airmail, a Curtiss JN-4H biplane. The biplane was also featured on the 24-cent stamps originally issued in 1918 to commemorate the beginning of regularly scheduled airmail service.

On May 15, 1918, in the midst of World War I, a small group of Army pilots delivered mail along a route that linked Washington, Philadelphia, and New York City — initiating the world’s first regularly scheduled airmail service.

The United States Post Office Department, the predecessor to the U.S. Postal Service, took charge of U.S. Air Mail service later that summer, operating it from August 12, 1918, through September 1, 1927. Airmail delivery, daily except Sundays, became part of the fabric of the American economy and spurred the growth of the nation’s aviation industry.

For airmail service to succeed in the early days of flight, the Post Office had to develop profitable routes, such as between New York and Chicago, and establish the infrastructure for safely making night flights.

It set up lighted airfields and erected hundreds of airmail guide beacons between New York and San Francisco so that by 1924 regularly scheduled, transcontinental flying was possible, day and night.

Airmail delivery, daily except Sundays, became part of the fabric of the American economy and spurred the growth of the nation’s aviation industry.

The United States Air Mail stamp is being issued as a Forever stamp that will always be equal in value to the current First-Class Mail one ounce price.