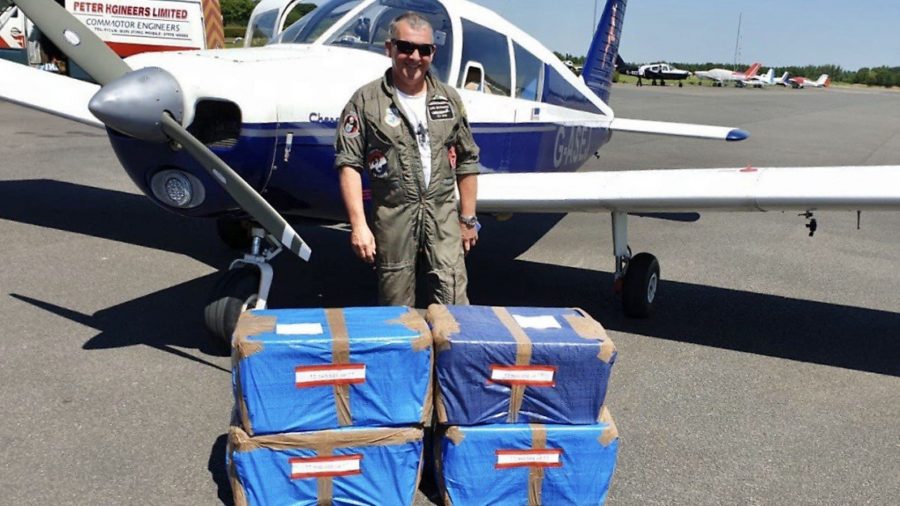 The UK Civil Air Patrol, ‘the volunteers in the air’ has completed one of its most ambitious missions, to support the British Divers Marine Life Rescue (BDMLR) with the delivery of Cetacean Satellite Tagging Kits from the bottom of England to the top of Scotland, from Cornwall to Inverness, as well as to Newcastle and to Perth

A total of eight kits have now been deployed to locations close to where whales, dolphins and porpoises are known to beach themselves.

There are now two kits in Cornwall, one in Devon, one near Newcastle, one at Perth, one in Inverness and one in Moray. The eighth kit is kept at the BDMLR HQ at Uckfield in East Sussex.

After considering the various options it was agreed that four kits would be flown from Perranporth in Cornwall to Turweston in Buckinghamshire by Civil Air Patrol pilot Carl Beardmore.

The four kits were assembled for the flight by by BDMLR veterinary support coordinator, Natalie Waddington who explained: “Once a veterinary surgeon attaches a tag to the dorsal fin we can follow the animal over subsequent days and weeks to track the mammals progress and, most importantly, to make sure that they haven’t re-stranded elsewhere.”

At Turweston 2 of the kits were transferred to a Cessna 340 belonging to Civil Air Patrol chief pilot and CEO of Akki Aviation Services Ltd, Graham Mountford, for the flight to Inverness.

By coincidence, Civil Air Patrol pilot, Robert de Roeck was collecting his Cessna Turbo Centurion from Akki Aviation, post maintenance, and agreed to drop one kit off at Eshott, near Newcastle, and take the fourth kit to his home base at Perth.

At Eshott the aircraft was met by airfield operator, Richard Pike, BDMLR North East coordinator, Jane Hardy and local Civil Air Patrol pilot, Storm Smith. Then, after dropping off the satellite tracking kit, a refuel and a quick turnaround, the aircraft continued its flight to Perth.

After the deliveries had been completed the BDMLR national coordinator, Julie Cable said: “We became very excited when we heard that the UK Civil Air Patrol could help us by transporting this valuable equipment to locations throughout the UK. We knew that this unique equipment would be in safe hands. The flight delivery by the Civil Air Patrol’s volunteers was exemplary.”

The chief executive of the UK Civil Air Patrol in England & Wales, Jeff Smith added: “Whilst many parts of general aviation in the UK has been grounded during the COVID-19 pandemic, the Civil Air Patrol has never been busier with missions that require just one person, the pilot of the aircraft.

“These missions have included the transport of a critical component, a circuit board, for a medical ventilator, the delivery of PPE to the Isle of Man, the delivery of coronavirus test kit consumables to the Outer Hebrides and, in cooperation with the British Blood Bike despatch riders, the transfer of time critical medical samples between hospitals that are hundreds of miles apart.”