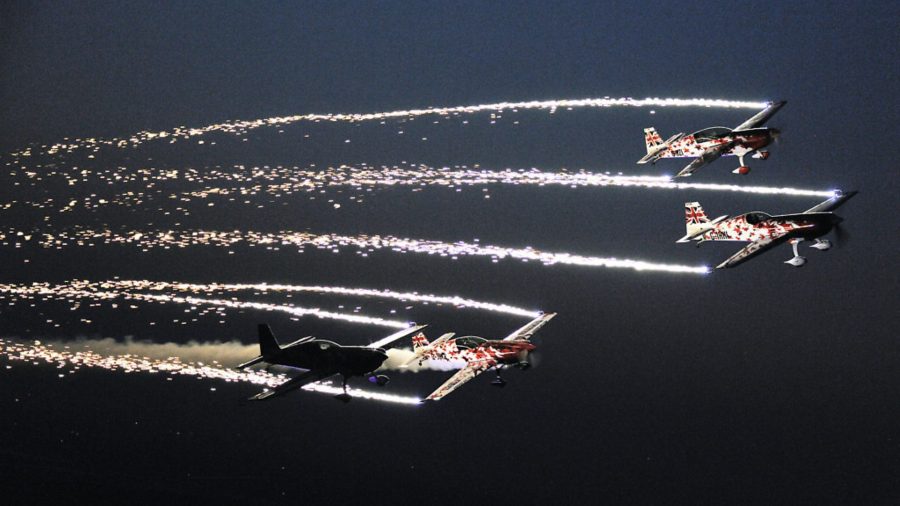 Invented in medieval China during the Tang Dynasty in the ninth Century, primarily to scare away evil spirits, fireworks were a natural development of gunpowder.

They became one of four great Chinese inventions (alongside the compass, paper-making and printing) celebrated in Chinese culture and historically significant as symbols of ancient China’s advanced science and technology.

The Chinese air display scene is developing slowly, backed by local government organisations and a national TV network that supports the large events with live broadcasting across their massive networks. In 2018, a large airshow was held at Shangjie Airport, Zhengzhou (ZHSJ), in Henan province.

After the daily flying display programme, the evenings featured the largest-ever gathering of pyrotechnic formation air display teams from all over the world.

The show was mainly conducted under UK CAA rules and regulations, and ‘run’ by two UK CAA-approved airshow directors – Mike Wood and Roger Steele – but the event was overseen by a Chinese official in the Control Tower who had the last word.

The daily flying programme of international performers included: the six-ship Weico Yak Display Team, the four-ship Global Stars, and the two-ship AeroSparx team – all from the UK; the four-ship Pioneers from Italy; and the three-ship Presidential Team ANBO from Lithuania.

The Flying Circus Stearman two-ship display team provided its usual excellent formation wing-walking display (although looking somewhat strange in a plain white colour scheme since the end of their Breitling sponsorship). Wayne Mansfield in his US-registered Aviat Husky provided the banner towing for the event, while Viper Airshows’ Jason Newbury provided a spectacular solo performance in a Pitts S-2S.

Jason also brought a jet car to the show, powered by a J-35 engine producing 3,000lb of thrust dry and 7,000lb with an afterburner, normally fitted to the F-5. Driven by Landon Rios, the plan was to have a drag race against the Pitts.

The car’s statistics are amazing! It burns a gallon of fuel per second in full burner, has a top speed of 350mph (due to body and tyre limitations), accelerates to its top speed in just six seconds generating 6g, and stops in around seven seconds with braking parachutes, creating 7g!

Interestingly, as the jet fuel in China was so clean diesel had to be added to generate the white smoke normally seen from the car. However, after a couple of practice demonstration runs, including a minor fuel leak and large flames streaking from the car, the local Chinese officials felt the dry conditions presented too great a fire risk.

Also scheduled to appear was the spectacular Starjammer aircraft, N49EW, flown by Elgin Wells. Based loosely on an Edge 540, this one-off experimental design featured more than 250 super-bright LEDs and promised a unique night time show, especially with a series of cleverly mounted LEDs in the propeller providing a series of coloured arcs.

Tragically, Elgin was killed when he crashed during his very first practice. Later in the week, the Global Stars performed a missing-man formation as a tribute to him.

Each individual or team performed twice a day, in the morning and afternoon. Various Chinese display items took place every lunchtime and featured a formation set piece by three Sun Hawk CC autogyros, the electric-powered Ruixiang RX1E, and a two-ship formation sequence by a pair of SunWard SA60L aircraft.

Traditional and modern skywriting methods were demonstrated. Wayne Mansfield flew the Aviat Husky, and from around 7,500-feet demonstrated the ‘old school’ method with a single aircraft and single smoke system.

With years of experience and despite stronger than comfortable winds, poor visibility in haze and writing Chinese characters, Wayne was cleverly able to recreate the symbols spelling out the message ‘happy every day’.

This year’s event featured a much larger static display, featuring everything from large bizjets through to Chinese designed and manufactured microlights and helicopters. Two interesting types, used by the Chinese Meteorological Service in ‘sampling’ operations, were the Xian MA-60 and Harbin Yunshuji-12.

The largest aircraft was a Deer Jet Boeing 737-700 BBJ and others in this category included a Citation Excel, Lear Jet 60XR, and a US-registered HA-420 Hondajet, the latter exhibited by local organisation Honsan Jets.

Helicopters included several Robinson R-22s and R-44s alongside a Rotorway Exec, and some interesting indigenous designs from Changzhou Zhonglian Aircraft including the minimalistic single-seat, Rotax 582- or 912-powered F-17, and the F-27, a two-seat R-22 lookalike powered by a Subaru EJ-25 engine.

The autogyro population was extensive, with most being from local manufacturer Sun Hawk (Henan) Aviation Industry Company, who offered an interesting range of gyro products as well as a range of military-application drones. Its basic open-cockpit, tandem two-seat autogyro design is the Hawk CC, although the ingenious CY-Hawk version is the world’s first unmanned UAV autogyro. It offered other drones in the shape of the Hawkeye, a four-rotor VTOL UAV and the XY-320, the world’s first four-rotor manned UAV.

The GA selection consisted mainly of US-manufactured designs including the Piper M600 and the European-manufactured TBM700. They were supplemented by the locally-registered Mooney Ovation which is assembled on site at Zhengzhou. At the lighter end of the GA market was a variety of imported designs, many of which are either manufactured or assembled in China.

These included the Pipistrel Virus, Jabiru J-160, Tecnam P2002H and Diamond DA20. Local designs included the SunWard SA60L – an attractive two-seat LSA, and the slightly ancient-looking four-seat, Rotax 914-powered Shenyang Light Aircraft Company Petrel 650C. Perhaps one of the most interesting was the Ruixiang RX1E, the first Chinese designed and manufactured electric-powered, two-seat aircraft – which bore a remarkable resemblance to the Pipistrel Virus.

The local parachute training organisation (ASFC) was well represented by numerous examples of the Shijiazhuang Y-5 (Chinese-manufactured An-2) alongside Gippsland Airvans, Quest Kodiak 100s and Cessna Caravans exhibited at various locations around the static display.

By contrast, Jez Hopkinson led a five-aircraft formation from the Yak Display Team demonstrating ‘sky typing’ at 7,500-feet overhead the airshow. From a Yak-52 in the centre of the line abreast formation, and flanked by two Yak-50s on either side, an operator in the 52’s rear seat controls the smoke output from an iPad sending the signals to the remaining four aircraft by wifi.

The result is a series of words cleverly created in dot matrix style smoke output – in this case spelling ‘Zhengzhou airshow’.

The results of both were very popular with the large audience, who broke into spontaneous applause as the words were created in the sky high above them.

The pyrotechnic display teams also flew each evening, meaning three displays per day! Even the locally-based paragliders displayed with pyrotechnics being released from around their feet just before each evening’s show.

However, as the ‘night time’ show was operated under CAA regulations, most teams actually flew at dusk, ensuring they were back on the ground by official night?often timing it to the very last minute. Only the AeroSparx team, who are approved for a night pyrotechnic display, was able to fly legally after dusk, and generally they closed the evening’s flying display programme.

Locally-manufactured pyrotechnics were used throughout and it was interesting to see the preparation required to assemble and mount the pyrotechnics ready for use.

Different teams used different methods but, for the sheer weight of pyrotechnics carried, the AeroSparx pair of Grob G109B motor gliders took the prize for the greatest quantity. Large quantities were mounted on each wing tip, with both rearward- and forward-firing pyros used.

All in all, the AeroSparx team of Guy Westgate and Rob Barsby presented a beautifully choreographed and elegant show, providing a fitting finale to each evening’s programme.

Once the Chinese paragliders with pyrotechnics around their boots had opened the evening’s proceedings, the Pioneers were usually next up.

Performing their own unique brand of formation flying, completing their programme with a pyrotechnic finale, using wingtip-mounted candles and a burst of forward-firing flares to great effect.

Then came the Global Stars, the world’s only four-ship formation aerobatic pyrotechnic display team. Once again, a large number of pyrotechnics of differing colours were mounted on each aircraft, firing from a number of different positions.

In addition to the clever use of their ‘dotty’ smoke system, the Global Stars also utilised fuselage-mounted LED lighting to very good effect.

Where the Pioneers only closed their show with pyrotechnics, the Global Stars used them throughout their performance, flying at dusk and consistently landing one minute ahead of official dark. Then the AeroSparx took to the stage to perform their unique pyrotechnic finale, something they performed nightly with panache.

The town of Zhengzhou is dominated by a massive aluminium processing factory, whose pollution affected visibility but generally did not hamper the event?except on one evening of relatively low cloud and heavy smog.

Aside from ticket sales on public days, the event was heavily supported by local and regional government initiatives?providing a large and diverse trade show. However, the organisers also put on daily live music concerts and entertainment in the grounds.

The very long crowd line was usually busy although it is always difficult to judge actual visitor numbers. However, live TV feeds from the event were broadcast on Chinese national TV with a viewing audience of more than two billion being claimed. Now that’s a lot of people!

The technical problems of shooting air-to-air photography at night tested both mine and my photographic equipment’s capabilities to the limit. What we achieved was largely due to the patience and support of the individual teams who made time for night-time pyrotechnic formation shoots.

Ground-based photographers can use tripod-mounted cameras with long shutter speed exposures, allowing for some amazing light trail images, whereas in the air you still have to capture pin-sharp images, but slow shutter speeds are out of the question.

Holding the camera steady is imperative and made more difficult when working by an open doorway with both the airflow and an occasional stray pyrotechnic coming your way.

It’s quite disconcerting flying alongside a formation of four aircraft firing a series of large fireworks from the wing tips! Positioning the formation against a suitable background takes serious planning as once the pyros are fired there is no ‘take two’.

For technically minded readers, shooting on high-end Nikon DSLR gear with a 28-300mm/f4.5 telephoto lens, I was operating at 1,600asa and managing a shutter speed of around 1/125th of a second. At this ASA setting, the images can still be a little ‘noisy’ so sharpening in post-production can be difficult – making the grain appear more like golf balls. Fortunately, modern, high-end digital photographic technology has seen massive leaps in quality at higher ASA settings..

You can’t underestimate the importance of the cameraship pilot either; the teamwork starts with the initial sortie planning and only finishes at the debriefing.

I’ve been privileged to work with an extraordinary young French commercial pilot, Alexis Delafosse, who demonstrated his steady skills on every sortie we flew.