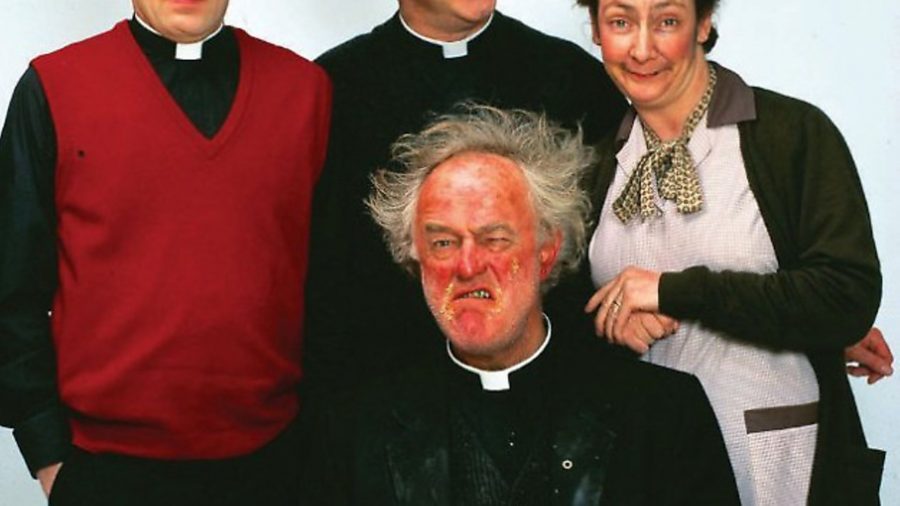 An aerial tour of County Clare and the Aran Islands, dropping in on locations used in the evergreen C4 television series Father Ted.

‘Ah, go on… go on… go on… go on…’ the gentle, persuasive, encouraging voice of Mrs Doyle from the legendary C4 series Father Ted, will be bringing smiles to many people for years to come. ‘Craggy Island’, Father Ted’s house, and the ‘Very Dark Cave’ – all made real in the comedy series from the 1990s – are all within a short distance from each other, and are all within the touring capabilities of most private pilots.

Nothing else to do today? Take the ‘Ted Tour’ of the West of Ireland, in glorious, uncongested airspace. Airfields, private and public, are available from 400m to 3,000m. Shannon (EINN), Inisheer (‘Craggy Island’) (EIR), Inishmann (EIMN), Inishmore (EIIM), Spanish point and even a bit further afield, Coonagh (EICN), Erinagh (EIER), and Birr (EIBR) make for a great touring route while following the Ted Tour.

Of course, the most recognised landmark, Father Ted’s House, is located in the heart of the Burren, County Clare – a rocky limestone landscape on the edge of the Burren National Park. The house is located at N53 00.791 W009 01.743. It is directly west from Lough Bunny and 10nm south-west of Gort. There is some high ground in the vicinity of the house, including Mullaghmore (or ‘Cow Pat Hill’ and no prizes are available for guessing why it has that unique nickname). You can visit Father Ted’s house, where the enterprising owners serve refreshments. PPR is required as Mrs Doyle appears to have succumbed to fame and fortune and vanished to the South of France on the royalties from the series (www.fathertedshouse.com).

Galway Airport (EICM) is close by to the north. It is however closed to all traffic including GA after 1700 local each day, and all day every weekend. It may seem straight out of the Father Ted series, but yes; an airport in a busy tourist area is closed for significant periods. The associated CTR for Galway Airport reverts to class G at those times. If in the area, listen out on 122.5 as Galway Flying Club only is permitted to use the runway (for the moment at least). Further out to the west, on the coasts beyond beautiful Connemara, the brand new airstrips at Inishbofin and Cleggan – built at a cost of over €3.5 million – have never been open to any traffic whatsoever, GA or otherwise. It appears that after the success of the show, Father Dougal was promoted to a senior management position in the government department that builds unused virgin airstrips. As Dougal himself would say ‘It’s mad Ted…’

The Very Dark Cave is located 6nm north west of Father Ted’s house on the southeast edge of Ballyvaghan village. In reality it is the entrance to the Ailwee Cave. A worthwhile attraction in its own right, the cave has been open to visitors Pilot August 2012 | 37 for over 25 years. Privately operated, it does not close to visitors ? ever. In more recent times, the addition of a falconry has proved a real attraction to an area that is heavily reliant on tourism. The nearby village of Ballyvaghan is well worth a visit. Friendly pubs, restaurants and hotels are busy year-round. The Father Ted House and the Very Dark Cave are both within class G airspace up to 2,500ft amsl. A call to Shannon Information on 127.5 and a squawk of 7000, while not mandatory, keeps everyone safe and happy.

‘Craggy Island’ has its own airfield. It is 520m long asphalt and located on Inisheer (EIIR), one of the Aran Islands. Radio is 123.00 (all of the islands share this frequency). Inisheer is a popular destination for aviators. It is located just 5nm off the coast of Co Clare and opposite the Cliffs of Moher, which also feature in the TV series. Parking can be a problem at Inisheer airfield as there is limited room. PPR is required from Aer Aran Islands, which has recently been awarded the operating licence for the three Aran Islands. It can be a bit fussy, especially when its air taxi service is operating. Local aviation gossip has it that Father Jack mans the radio from time to time and a request to land may well be met with an unmistakable “Feck off!”

Father Jack has a problem with GA, as does Father Dougal who, as already explained above, is now working in the government department blue sea, but don’t be fooled: the water is freezing. The furthest and larger island to the north, Inishmore (EIIM), also has a 520m runway and it is easier to park and access. The locals understand the very essence of Father Ted, especially his ability to generate money that would ultimately ‘rest in his account’. It is rumoured that he was born on Inishmore and has now retired there. In his honour they organise a ‘Ted Fest’ each March, complete with a ‘lovely girls’ competition for those who would see themselves as soul mates of Father Jack.

Back on the mainland, Spanish Point Airfield 575m (grass) and radio 123.30, is a delight to visit with hotels and restaurants within easy walking distance from the airfield. Spanish Point beach (a good surfing location) is also featured in the series, with Ted and Dougal taking the air during another troubled time in their generally confused daily routine. The owner of the Spanish Point airfield requires PPR as it is located on a busy farm. However, a phone call is all that is needed. Spanish Point airfield is directly south east of ‘Craggy Island’ (EIIR) and is a short distance 20nm west of Shannon Airport.

Also featured in the Father Ted series, Shannon Airport has a 3,199m long runway. A flight plan is required an hour in advance, as it is a reasonably busy international airport. Shannon is very GA-friendly with an inexpensive landing fee. Why not give it a visit? There are not that many GA-friendly large commercial airfields left and even fewer that were also an out landing location for the Space Shuttle. Now wouldn’t Dougal and Ted have really loved that!

We are fortunate with many fine airfields and facilities in the West of Ireland all along the coast from Donegal to Cork: public, private, some famous like Craggy Island and some unknown. A complete flying adventure in beautiful scenery is easily available for all levels of skill. Come and enjoy it.

For details of all Irish airfields try Aviators Guide to Ireland by William Flood and Lorcan Parker, which provides details for all public and private airfields in Ireland with maps, photos and much more. Alternatively, visit www.flightguide.me or read the equally excellent VFR Flight Guide to Ireland by Kevin Glynn, also with extensive maps and photos. Additionally this guide is available as an iPhone App. “Brilliant Ted,” as Dougal might say.

Did you enjoy this article? We have more Flying Adventures to read:

6 stunning destinations you can only reach by aircraft