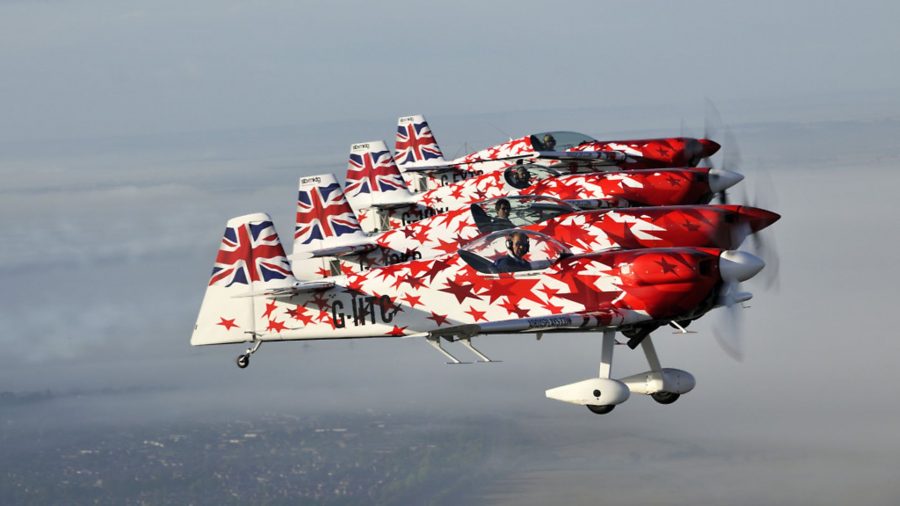 In the arena of formation aerobatic display flying, a new British team is wowing crowds around the world

Over the last thirty years, I have been lucky enough to fly alongside and photograph the amazingly talented Mark Jefferies as he flew everything from a Bücker Jungmann, Pitts, Laser, Yak-52, and Yak-11 to a variety of Walter Extra’s aerobatic designs.

The latest assignment saw me hanging upside-down in my straps in the front of an Extra 300L?superbly flown by Chris Heames?while flying above, behind and beside the UK’s newest formation display team, The Global Stars. Images from that shoot illustrate this profile, and you can see why the team is achieving great success on the international air display circuit.

Team manager Mark has been involved in aviation for as long as he can remember. He flew regularly with his father Len from their family strip at Fullers Hill Farm?

Mark wanted to learn to fly as soon as he was old enough and at seventeen gained a gliding scholarship with the Air Cadets at Henlow. Later, at 21, he was placed under the watchful eye of Norman Whistler (a wartime RAF instructor on Harvards in Canada) to learn in the family ACA Scout.

He quickly went solo and soon progressed to advanced stall and spin training. Later in his training, when Norman sent him off solo “to fly around for an hour”?but didn’t specify what type of flying?Mark climbed to 5,000 feet and practised spinning on his own for the hour; his first solo aerobatics.

After passing the GFT (‘skills test’ today) and with a few more hours required to finish the course, Norman and Mark used the time for dual aeros. Clearly, Mark was hooked! Around this time, Mark had been rebuilding a Spanish-built CASA Jungmann but recognised that it was probably a little advanced for a new PPL holder to fly, so he racked up some fifty hours in a Tiger Moth, once again under Norman’s watchful eye, before flying the Jungmann.

In 1984, at his first ‘unofficial’ competition at a Moth Club event, Mark (along with his friend Neil Jensen) was challenged by Barry Tempest to enter and fly what for Mark and Neil was an unknown sequence, although every other competitor had received advanced warning and had time to practice. Neil won the event, with Mark finishing second, ahead of all of the Tiger Moth owners!

In 1985, Mark started competing seriously in the Jungmann, flying in the British Aerobatic Association’s Standard Level aerobatic events. He was placed second in the first event and won all the others, including the Nationals that year, and quickly progressed through the Intermediate and Advanced levels, having a number of successes in a Pitts Special.

With Kester Scrope, in 2003 Mark acquired a ‘very tired’ Extra 300S. After rebuilding it, they started to compete at the Unlimited Level and Mark won the Nationals in 2005, 2006 and 2007. He then competed in the Extra 300S in the World Unlimited Aerobatic Championship in 2007, when most competitors were flying Cap 232s and Sukhois, the Extra being considered five years out of date.

He finished a very creditable eighth in the men’s and ninth overall, beating a number of the Russian greats?“They must have been having off days,” insists Mark.

To date, he has won nine national championships at various levels and represented his country on ten occasions, his greatest success being a second-place finish at Advanced Level in a World Championship.

Recognising the need always to stay ahead of the competition, either with new manoeuvres or by putting two or more aircraft together, Mark joined forces with Andy Bickmore and flew a pair’s routine at an event in China. Soon afterwards he approached Tom Cassells?another well-known name in both Unlimited competition and display aerobatics?and formed the first iteration of The Global Stars, a team that quickly grew in popularity.

When Mark organised a four-ship display team for a large Chinese event in 2014, with pilots Tom Cassells, John Taylor and Chris Burkett flying Extras alongside Mark, the kernel of todays Global Stars was formed.

Mark quickly recognised the problems of flying with a formation display team compared to operating solo. “The whole thing needs to be calmed down considerably, with the leader flying very steadily while thinking for his wingmen. It is about slowing it down, controlling the G and becoming more graceful. While some formation display teams need to move away from the crowd to prepare for the next manoeuvre, The Global Stars remain ‘crowd-centre’ throughout.”

Mark also realised he needed the very best aerobatic pilots. The normal line-up (featured in the Pilot photoshoot) is led by Tom Cassells flying a Cap 232; Steve Carver flies an Extra EA260 on the left, in position number 3; Mark Jefferies flies an Extra 330/SC on the right, in position number 2; with Chris Burkett in an Extra 300/L flying in the ‘box’. However, Steve Carver has a full-time job as an airline pilot, so to meet its worldwide commitments the team needs more than just four pilots to call upon.

The line-up is supplemented by the very talented Michael Pickin (who was the UK’s youngest-ever authorised display pilot, and is the current UK Advanced level aerobatic champion) and Chris Heames (a former RAF fast jet instructor and well-known formation instructor at North Weald, who retains a fast jet display authorisation and also displays some of the quirky, vintage gliders at Old Warden). It is an impressive pilot line-up.

Flying different aircraft types for displays does provide a few problems but, in Mark’s opinion, all are fairly similar in terms of power and weight, although the roll rate of the Cap 232 is significantly better than any of the Extra aircraft so Tom in the lead “has to fly extremely carefully, limiting the control inputs and restricting power to around 21 inches”.

their aircraft. Envisioned by Mark to give him an edge at the World Aerobatic Championship in 2009, where the judging criteria included ‘use of smoke’, it was designed by computer wizard Richard Parkinson. A Global Stars display usually lasts twelve to fifteen minutes but none of the aircraft has sufficient continuous smoke capacity for that length of time.

The bespoke system allows continuous or ‘dotty’ (pulsed) smoke to be selected on all four aircraft as and when required, helping to stretch the smoke duration of each aircraft. This, and the aircraft’s spectacular colour scheme, gives the team a significant presence wherever they appear.

The Global Stars’ 2017 routine is significantly more advanced than in previous years. The team is preparing for the inaugural Formation Aerobatic Championships to be held in China in April, and the series of displays it gave at an aviation conference in Vijayawada, India in mid-January afforded the pilots much-needed time to practice and fine-tune the new routine. The Formation Aerobatic Championships (www.wfac.eu) from 29 April to 1 May is an exciting new international event on the world airshow calendar.

The FAI has signed an agreement with World Air Carnival Ltd (one of Mark’s companies) to manage, stage and promote the championships and has granted FAI class 2 sanction for it, making it an invitation-only event.

To test all of the teams competing, Mark has invented a new formation manoeuvre especially for the FAC called the Butterfly Loop, which involves a mixture of looping and rolling and is not easy to fly well. The Global Stars will open their own sequence with this manoeuvre, followed by a quarter clover on the way up, a steep wing-over, then a loop with a roll on the way down, before entering a formation half-Cuban – something Mark feels is not often attempted by formations as it is technically difficult to fly.

A classic barrel roll, followed by another wing-over with formation changes being thrown in for good measure, and then a 360º turn (made to meet a specific judging criterion for the Championships) will be followed by some breaks and opposition-pair manoeuvres, including a mirror pass. Then some solo Jefferies unlimited gyroscopic figures will be thrown in while the team prepares for an inverted mirror pass and double roll-around, before rejoining as a four-ship to complete the complex twelve-minute sequence.

This is a difficult routine with plenty of ‘wow factor’ but, flown gracefully, should keep the G-forces down to 5G at the bottom of the loops: tough, but nowhere near as tough as an Unlimited solo sequence!

The display flying may be demanding but spare a thought for the person who deals with the logistics. For most overseas shows, two shipping containers are used, with a pair of aircraft in each. Although slightly more risky than four individual containers, it reduces expenses by around £2,500.

Fortunately, several team members own more than one aircraft, allowing display mounts to be sent on to destinations ahead of the event. For the recent India displays, three of Mark’s Extra aircraft and Steve Carver’s ‘spare’ Extra 260 were shipped out in containers, then re-assembled by Mark and engineers and test-flown ahead of the displays. This allowed the team to fly four similar aircraft.

After India, the Extras were sent on first to Shanghai, and then had an eight-hour road trip to reach their destination at Shangjie before re-assembly ready for the team’s Formation Aerobatic Championships sequence. Once that event is over, Mark plans to leave two aircraft in China, so that he or his team members have two display aircraft ‘locally’ available for Asian airshows in the coming year.

Mark and Steve Carver will collect the two aircraft from Germany and fly them into Holland for the show, after which all four aircraft will be flown back to the UK.

Since their creation, The Global Stars has become a truly international display team, performing mainly overseas. However, in 2017, it will also display at a large number of British events including Old Warden, Chatsworth, Broadstairs and Blackpool.

The Global Stars team is much greater than the sum of its parts.

Individually, they are all excellent aerobatic pilots, but together they become a tight and spectacular display team performing with masses of ‘wow factor’. They are always willing to try and master something new and difficult, while ensuring they stay right in front of the spectators.