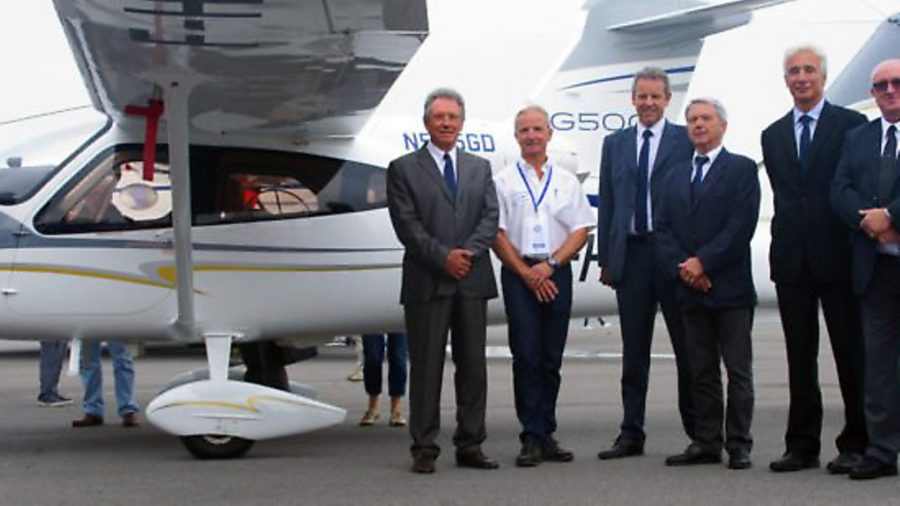 Slated for delivery to launch customer Cape Air in early 2019, key members of its leadership team including Dan Wolf, Founder & CEO and Jim Goddard, SVP Fleet & Technical Operations, recently visited Tecnam to inspect the significant progress made on the first P2012 Travellers to be delivered.

The next-generation 11 seat P2012 Traveller has been much anticipated by many airlines, who have been demanding a replacement for the hundreds of ‘heritage’ airplanes in the FAR23/CS23 category currently in service around the world.

Cape Air will be the world’s first airline to place the P2012 into commercial service.

The P2012 test and certification is at an advanced stage. The first two prototypes have completed over 80% of the introduction to service programme and have achieved nearly 400 flight test hours.

Tecnam have announced the signature of the contract with Hellenic Air Force (HAF) for the supply of 12 low wing trainer P2002JF held in Athens last July 5th.

The contract, signed by Walter Da Costa, Tecnam Global Sales and Marketing Director and by the General Staff of the Hellenic Air Force, in the presence of the Minister of National Defense, Mr. Panos Kammenos, the Chief of General Staff Chief of Staff, Vice-Chief Christos Christodoulou, is the result of a tender procedure initiated in June 2016.

The HAF, among several competitors, choose the Tecnam P2002 JF as its screening/primary training aircraft for the 360 Squadron, at Dekhelia Air Base, also home of the air force academy.

In addition to the 12 P2002 JF aircraft ordered, Tecnam will provide a SOFTEK simulator and a computer-based integrated training system with ancillary support services.

The Tecnam P2002JF is a two-seat, single engine, low wing aircraft. Powered by the popular ROTAX 912, and with the latest avionic from GARMIN, it is firmly established as one of world’s most popular single engine aeroplanes and the aircraft of choice by so many Flight Training Organisations and Air Forces.

Air Paris Academy (APA), based at Tours Airport (France) has selected the TECNAM P2010 MkII with the aim of establishing itself as one of Europe best equipped and largest FTO ensuring its students benefit from the most modern fleet of training aircraft.

The Tecnam P Twenty Ten is the first new single engine, high wing, four-seat aircraft from Tecnam that brings together an advanced technology all carbon fibre fuselage with a metal wing and stabilator.

Founded six years ago by Neel Khokhani when he was just 22, SOAR Aviation is now the Australia’s largest private flying school with with over 500 students studying towards their Diploma of Aviation Commercial pilots license, under a partnership agreement with Boxhill Institute.

The Tecnam P2008 is the first new single engine, high wing, two-seat aircraft from Tecnam that brings together an advanced technology all carbon fibre fuselage with a metal wing and stabilator.

With its spacious cabin, comfortable seats, 120 litres of fuel and advanced cockpit ergonomics, the Tecnam P2008 is well equipped for advanced flight training in Australia’s harsh environment where temperatures can range from freezing one week to 45 degrees Celsius the next.

EASA and FAA have now given certification approval of the Leica City Mapper installation on the P2006T SMP. The Leica CityMapper is specifically designed for 3D city modelling and urban mapping. It is the world’s first hybrid airborne sensor combining both oblique and nadir imaging as well as a LiDAR system.

The Tecnam P2006T SMP has been produced to support a wide range of special missions and applications, such as search and rescue, reconnaissance, immigration surveillance/border patrol, drug trafficking and law enforcement roles.

It is fully able to replace, support and drastically reduce the use of far more expensive and complicated assets such as the deployment of CS/FAR 25 airplanes, helicopters and coast guard vessels. the Tecnam P2006T SMP achieves a step change in the delivering of aerial mapping missions by establishing a cost effective and unique solution for special mission operators.

With a payload capacity optimized for CityMapper (plus a PAV100 gyro stabilized mount), the Tecnam P2006T SMP can easily perform mapping missions of up to 4 hours with both a pilot and camera operator on board.

The P2006T SMP’s high wing and retractable landing gear allows for a ‘no view obstruction’ for external cameras and operator FoV (Field of View). This potentially may make the difference between mission success and failure or as a worst case, poor collected data package.

Tecnam, BRP-Rotax and Siemens team up for hybrid propulsion for general aviation

H3PS will power the Tecnam P2010, but will also be suitable for an entire market segment which still employs leaded fuel and piston engines whose basic technology, although reliable, is over 60 years old.

The project is managed by three top European GA players: TECNAM (coordinator) for airframe and system integration, BRP-ROTAX for design and integration of combustion engine and e-motor, SIEMENS for e-motor and power storage.

The goal will be a marketable solution to bring new and old General Aviation aircraft into the hybrid vehicles arena, providing an immediate way to leave leaded fuels while offering superior performances, comparable installation weights while featuring fuel savings and greener operations.