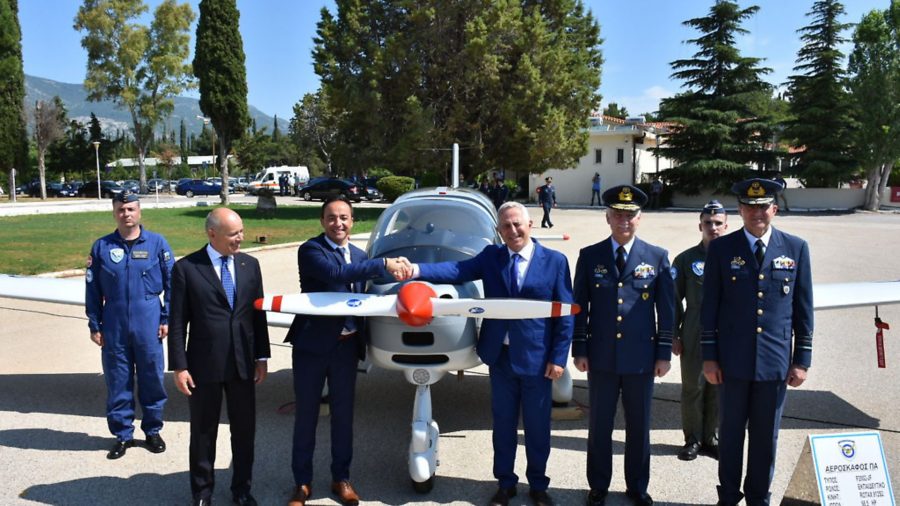 An impressive ceremony took place on Wednesday, June 12, 2019 at the Dekelia Air Base in Tatoi (Athens), in the presence of the Minister of National Defence, Evangelos Apostolakis, and Italian Ambassador Efisio Luigi Marras.

The event celebrated the last batch of delivery of twelve Tecnam P2002JF low-wing trainers delivered to the HAF as a result of a thorough and intensive evaluation process.

The arrival of the new training aircraft is part of the implementation of the flight education upgrade program that takes place at the Ikarian School for the initial selection and introduction to flying, as well as for the broader planning of the Armed Forces for the whole of air training. The Tecnam P2002JF replaced the old trainer T-41D, which was used for about fifty years, since 1969.

As part of the ceremony, the last three delivered P-2002JF training aircraft that arrived the previous day, flying from TECNAM headquarters in Capua, were presented by the Minister of National Defence and the Chief of Staff, respectively.

In addition to the twelve P2002 JF aircraft, Tecnam has provided a SOFTEK simulator and a computer-based integrated training system with ancillary support services.

The Tecnam P2002JF is a two-seat, single-engine, low-wing aircraft. Powered by the popular Rotax 912, and with the latest avionics from Garmin, it is firmly established as one of world’s most popular single-engine aeroplanes and the aircraft of choice for a large number of Flight Training Organisations and Air Forces.

In 2016 Tecnam delivered eight P2002JF aircraft to the Argentina Air Force. This fleet has amassed a total of over 7,000 hours and performed 16,000 landings to date.

Evangelos Apostolakis, Minister of National Defence of Greece, said: “We are pleased to see the fruits of a major effort, the implementation of a program to upgrade the flying training that takes place at the Hellenic Air Force. The inclusion of the twelve new aircraft with associated ground support and education equipment is a practical and essential step, part of the broader planning of the Armed Forces for all air training.”

Walter De Costa, Tecnam Global Sales & Marketing Director, said: “On behalf of Tecnam and the Pascale family, we are very proud to be part of the future of HAF, honoured to be contributing to the excellent standard of education and training that HAF is providing.”