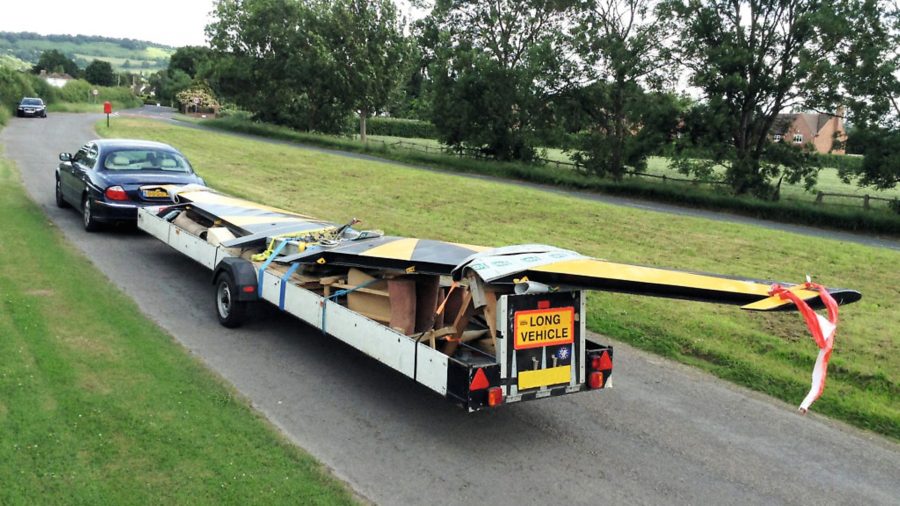 I had unexpectedly found myself in possession of the dismantled but almost completely refurbished Fournier RF6B G-BLWH, or WhoreHouse as former owner Tizi Hodson had colourfully known it. But I had to collect the aeroplane from Staverton, 130 miles away. I called my long-time friend and Fournier expert Dave Bland who worked there. Could he perhaps take a couple of days off to help me pack and bring everything to Sussex? We would need two journeys, one with the wing and a second with the fuselage, canopy, cowlings and most of the other components. He agreed and we arranged appropriate remuneration?the game was on.

Previously I’d towed my glider trailer with an ancient Land Rover, but that had to be sold to finance my 2014/15 Fournier RF4D rebuild. Now we owned a Jaguar S-Type. Jeremy Clarkson may think they’re ugly, but we love ours?the apogee of Twentieth Century British sports saloons. It had a manual gearbox, so I had no qualms in getting a tow ball fitted. But the car was nearly twenty years old. I Googled and phoned several local trailer suppliers, but their answers were all alike: ‘We can fit a tow ball, but you will never find an S-Type wiring loom. They’re completely different from anything else.’ It was apparently something to do with the wiring being digital and the wiggly amps running clockwise rather than anticlockwise?something like that, and anyway incomprehensible to me.

Eventually a super local towbar supplier who was clearly a one-man operation phoned me back. He told me that there might be just one company that would have the required loom, P F Jones Ltd, but they were based in Manchester. I phoned them and yes, they did. Everything could be delivered within the week and a local operative would come to my home to fit it.

Call me an old cynic, but if all these other, nearer concerns reckoned the task was impossible, then I was suspicious that this tow bar and ball could be fitted and the electrics made to work in their claimed ‘couple of hours’, so I asked that it be done at Dunsfold Aerodrome, where the trailer lived in my hangar. I also left a full day between tow bar fitment and arranging to collect Whisky Hotel.

During the intervening week and, ever curious, I researched G-BLWH’s history. René Fournier had designed the RF6B as a derivative of the larger, Lycoming-engined, four-seat touring RF6 which his German business partner Alfons Pützer thought the market needed. René disagreed, instead developing this lighter, fully aerobatic, two-seat trainer alternative powered by a ninety horsepower Continental engine (later upgraded to 100hp). Slightly confusingly, he retained the RF6 designation, but with a B suffix denoting ‘biplace’ or two-seater. As it turned out, the four-seater was a failure but the RF6B trainer became much in demand by French flying clubs and schools who wanted something more sprightly and capable than Cessna 150s and Piper Cherokees for endowing pilots with a full complement of handling skills.

Convinced of the viability of his design but unable to finance a full-sized aircraft factory, René set up an assembly hangar adjacent to a private airfield near his home in Nitray, Touraine, and set sub-contractors all around France to making the major airframe components. Sadly a combination of official indifference and obfuscation, soaring fuel prices, fluctuating currency rates and financial uncertainties led to the eventual demise of the Sociéte de Construction et de Diffusion des Avions Fournier and René’s personal bankruptcy, despite his design going on to spawn 281 Slingsby Fireflies over succeeding decades. Sadly René didn’t get a centime from this licensed production.

Whisky Hotel left the factory on 6 September 1976 for the Aérodrome de Salon-Eyguières (LFNE) in Salon-de-Provence as F-GADF, the seventh production example. Robert Fray of Peterborough subsequently imported it from Orange as one of a pair with his friend Graham Milton in 1985. The other was production No 3, later to become ’WH’s sister-ship at Tiger Airways, G-BKIF.

By December 1985 Whisky Hotel was owned by Rod Ashforth’s Gloster Aero Group, which coincidentally also then owned my RF4D, G-AWGN. From 1999 ’WH was privately owned, but sadly in 2004 with 5,600 hours, its annual C of A renewal air test was failed because, like many other O-200-powered aeroplanes, it couldn’t quite achieve its published climb rate.

Darrol Stinton’s excellent Flying Qualities and Flight Testing of the Aeroplane lists no fewer than 28 reasons why this might happen. Two are ‘oversize wheels’ and ‘ignition timing’. Whisky Hotel was fitted with the larger, T67A nosewheel early in its life, and in 1994 Continental mandated retarding the O-200’s ignition from 28°BTDC to 24°BTDC which obviously caused a reduction in maximum power. Either of these plus any one of the 26 other possible reasons might have caused the reduced climb performance, but I’ll bet good money it was that nobody noticed the climb data in the RF6B’s Flying Manual is unusually (indeed, possible uniquely) predicated on the use of Flap 18.

Fortunately this annual climb check is no longer a requirement, but back then somebody arbitrarily decided that its fabric must be the cause, so it was completely stripped. I might add that none of Stinton’s reasons included fabric condition, nor should it. I sense skulduggery.

This fabric removal revealed a small amount of superficial woodwork deterioration, which was repaired at Booker before the whole airframe was re-covered in Ceconite. Meanwhile one of the elderly owners became ill and the project languished for eight years before being bought by Tiger Airways at Staverton to supplement their fleet of Tiger Moths and Stampes. Dave Bland started reassembling it and painted it in black and yellow colours based on René Fournier’s artistic RF4D standard scheme.

Meanwhile, two large packages arrived on my doorstep. They contained the Jag’s tow bar and ball, and that elusive wiring loom. A few days later the fitter arrived from Rochester at lunchtime. He soon had off the rear bumper cover and bolted the tow bar and ball into place, but then started grumbling about the wiring. He used several complex pieces of test equipment and worked persistently in the dirt and dust under the car. Eventually he declared himself satisfied. By now it was eight pm and dark, but I wasn’t prepared to take his word for it, so I dragged out my trailer, hitched it up and plugged in the loom. Amazingly, everything worked as advertised. I think even he was a bit surprised.

Two days later I set off back to Staverton with the trailer full of pallets and carpets for support and padding plus a big container full of ratchet straps and ropes. There I handed over Tizi’s money, in exchange for which I got a heavy cardboard box of documentation and a set of keys. Along with all the other stock of Tiger Airways, G-BLWH had been evicted from their original premises and now lay abandoned and dusty in a dilapidated hangar beside the gate. I backed in my trailer and we started loading. The fuselage went first?the three of us were just able to manhandle it aboard. We followed that with everything else we could possibly cram on to the trailer, in the knowledge that tomorrow the wing would not only fill it, but overhang by nearly two metres.

It’s surprising how many individual components comprise one airframe and how bulky they are when not assembled. There were the fuselage, canopy and cowlings, yes?but there were also two ailerons, the fin and rudder, a full instrument panel, two seats with cushions, two control columns, three undercarriage legs and wheels, the propeller and its spinner and backplate, the complete exhaust system, assorted engine baffles, carburettor, fuel pump, a box of gauges and dials, the cockpit cover, a tailplane and two elevators, not to mention boxes and bags and bags of new nuts and bolts and all those vital documents which went on to the back seat. The four sections of flaps would just have to wait until tomorrow.

We lashed down everything, being sure to protect it all with plenty of padding. Under threatening skies we spread that cover over the cockpit and ensured the delicate, vulnerable and probably irreplaceable Perspex canopy bubble was thoroughly protected. Then I had to be certain there was adequate weight on the tow ball to avoid my trailer snaking at speed. We did this by putting our tools and the boxed engine components at the very front.

As soon as we exited Staverton’s gates the road surface deteriorated to what in Southern England nowadays passes for ‘acceptable’?that is, a succession of ruts, potholes, temporary repairs and other discontinuities that would be more appropriate to a third-world country. My hackles arose at every jolt to our priceless and vulnerable cargo. Despite driving as slowly as I dared, in our rear-view mirror I could see the trailer and its contents bouncing and jiggling along behind us like… well, imagine a pair of bouncy things.

A couple of miles up the road I pulled into a convenient layby to recheck everything. The fuselage had settled a bit and some of the foam sheets had become compacted, so we tightened the straps a little before continuing cautiously on our way. Fortunately the M4 and A32 surfaces weren’t as bad as those local roads.

Three nerve-wracking hours later I reversed the trailer up our drive so we could unload the fuselage into my garage. Getting it out was no problem, but hoisting it on to my metre-high bench wouldn’t have been possible without the help of a burly neighbour who just happened to be passing. Dave and I were able to unload everything else unaided before repairing to the local Indian restaurant for delicious and plentiful food with an abundance of Kingfisher lager.

An early start the following morning saw us back at Staverton contemplating that heavy wing. I had brought a couple of pallets, several trestles and other packing materials to raise it above the trailer’s end plates, but how to get that great heavy thing up there? “Don’t worry,” said Dave “the firemen will help” and off he went to get them.

Minutes later half a dozen burly guys had hoisted that wing on to our trailer’s pallets and trestles and we were done. They refused any compensation. Thank you very much chaps.

Now we set about securing it, using not only all my straps and ropes but several of Dave’s too. My trailer is eight metres long with a one-metre towing bracket, but the RF6B’s wingspan is 10.6 metres. I arranged the forward part of the wing to overhang the tow ball, but there was a good 1.6-metre projection at the rear, so I marked this with a red Oratex fabric off-cut. That transit also went smoothly, despite the Surrey roads’ even more appalling condition nearing Dunsfold, where the trailer and wing went safely into my hangar.

There was but one remaining hurdle. Throughout all this process I had been living alone in England, while my wife Karen was in Australia dealing with her big art exhibition. It seemed rude to interrupt her busy schedule with the information that I had bought yet another aeroplane, so I kept putting it off. Of course, the longer I delayed telling her, the more difficult it became. Finally the time arrived for me to collect Karen at Heathrow. Luckily, as I loaded her suitcase into the boot, she didn’t spot the new tow ball. All the way home we chatted about personalities and inconsequentialities. The flow of conversation was too fluid for me to want to interrupt it with what might be interpreted as bad news. So I didn’t.

It was only later in the day that Karen went out into our garage which doubles as her studio. I waited with bated breath. “Oh how lovely.” she said. “You bought it.”

I am a very lucky man.