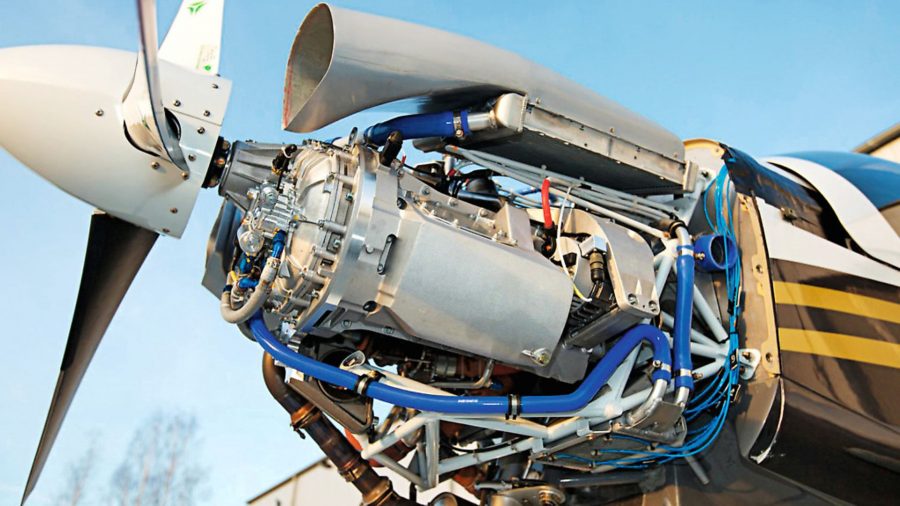 Thanks to the ingenuity of designers and entrepreneurs, we now have the widest choice in light aircraft engines for years – and the options are growing. Part one of our survey covers engines up to around 150hp | By Philip Whiteman

Long understood by the specialists who design and tune engines, gas flow is key to engine power: quite simply, the more air you can flow through a combustion engine, the more power it will produce. The special requirements of aircraft power plants, which have to be light, capable of turning a propeller at low rpm and ultra reliable, mean that aero engine design has followed its own path ? and taking the expedient route of adapting a car engine has never been easy.

To understand why this is so, we need to revisit school physics. In a reciprocating engine, where pistons moving up and down are connected to a crankshaft, the driving force is the mean effective pressure (m.e.p. or simply P) acting on those pistons. Cast your mind back, and you may recall work done is the product of force times distance?in this case m.e.p. times piston area (A) times the distance travelled by the piston during the expansion stroke (L).

Finally, power is the rate which work is done?in this case the number of firing cycles per second (N). We’ve spelled out power equals P x A x L x N, or expressed more simply and remembered more easily as power = PLAN (not so difficult, was it!)

For a simple, non-supercharged four-stroke engine running at full throttle with optimal ignition timing and the correct mixture setting, you cannot do much to alter P, which remains more or less fixed, and so the essential routes to getting more power are increasing A and L?bore and stroke (engine size)?or raising N?the rpm.

The approach for car engines, where there are restraints on capacity arising from somewhat arbitrary factors like tax considerations and the rules in motor racing, the answer has been to rev the engine higher. At high revs, not only do you have to open up the passages and port area to allow more intake air and exhaust gas to flow?but the inertia of the gas becomes significant.

To ensure that the cylinder is emptied, the exhaust valve has to remain open after the piston has reached top dead centre at the end of the exhaust stroke, but to maximise the incoming charge, the inlet valve needs to be opening before the exhaust stroke is complete ? so high-output car engines end up with big ports, multiple valves and plenty of ‘valve overlap’ (and traditionally run badly when they are ‘off the cam’).

In aviation the requirements are different: an aero engine must be as light as possible in construction and run at a relatively low speed constrained by the limits of propeller efficiency?and there is no artificial limit to engine capacity. If you can simply make an engine as big as is needed ? making A and L bigger in the PLAN ? you can get the requisite power.

Thus for the better part designers in the aviation world have avoided the sexy stuff ? overhead camshafts, four-valve heads, gas-flowed exhausts and all that?and stuck to the crude looking push-rod, two-valve engines we all know so well.

Beneath the surface, those ‘crude’ aero engines we have lived with since the 1930s are actually rather clever. If the weight and complexity of reduction gearing are to be avoided ? one of the fundamental lessons in engineering is that the simpler a mechanism can be made, the less likely it is to fail ? an aero engine has to run at propeller speed. For the typical two-blade unit, this means a sensible maximum in the interest of propeller efficiency and noise of around 2,800 rpm.

The astonishingly long-lived Continental O-200 (‘O’ for opposed cylinders and ‘200’ for 200 cubic inches) is a prime example of what was best in traditional aero engine design, delivering 100hp at 2,750rpm and displacing 3.29 litres. It’s also a very light engine, weighing in at 90.3kg (199lb) dry, including accessories (carburettor, magnetos and generator.

That ‘dry’ bit is important, because the O-200 is of course air-cooled, meaning that the ‘wet’ element of the installed weight is confined to four litres or so of sump oil ? say 3.5kg. To put this in context, this 1930s/40s design still weighs significantly less than the highly-developed 1.2 or 1.4 litre engine of the same power you would find in a VW car today.

For decades, people had been trying to make a go of converting the one car engine that most resembled an aero engine, the air-cooled VW ‘boxer’ used in the Beetle. The first editions of Pilot carried Rollason’s advertisements for ‘the mighty Ardem X’, the VW-based Limbach was a popular motorglider engine across Europe and generations of homebuilders have brewed their own conversions, with various degrees of success.

The trouble is that the VW’s modest output – 47hp in single-port 1600 form – becomes even more so when running at acceptable propeller speed, there are limited options for increasing capacity without it becoming expensive and any tuning tended to reduce reliability. There is also the issue of the engine going out of production.

Which brings us to the aero engine that has upset the applecart so completely in the years since its introduction in the late 1980s: the Rotax 912. Like the Beetle engine and O-200, the 912 is a flat-four with a single, centrally-mounted camshaft operating the valves via pushrods. However, the Rotax differs from classic VW car- and Continental aero-engine practice in that it has separate, liquid-cooled heads.

It is hard to make air cooling work adequately with high-power engines, as a glance at the extraordinarily complicated cylinder fins and ducting arrangements of the last of the big radial engines will confirm, and the Rotax design follows Porsche’s ultimate racing practice in going to liquid-cooled heads.

The 912 also follows general automotive practice in that it is a small-capacity unit that runs at high revs, in the case of the debut 80hp version 1.2 litres and 5,800rpm. As a yardstick, the 1200 Beetle engine produced 34hp and today’s Fiat 500 1.2litre ‘eight valve’ only makes 69hp, running at 5,500rpm ? so the Rotax is sporty even by car standards, never mind aviation ones.

Propeller revs are kept to a sensible limit by the additional complication of a 2.27-2.43:1 reduction gear. By taking the capacity up to a still very modest 1.35 litres and raising the compression ratio from 9.1:1 to 10.8:1 the naturally-aspirated 912 was by the late 1990s producing 100hp?and proof that none of this was over-stretching the design is the way Rotax has been able to extend the TBO (time between overhaul) of the 912 series, by 2010 matching that of a traditional aero engine.

Today we have the 915iS which, like the 914, uses a turbocharger to produce more power (this time we’re pushing up the P bit of the PLAN and going back to where we started: the more air you can pump through an engine, the more power it will produce). Liquid-cooled, geared, fuel injected and turbocharged?and stone-reliable for all of that. Boy, has the conventional light aircraft engine progressed in the last three decades!

But what about the unconventional ones? The one type that has found success, albeit not without some teething troubles, is the diesel engine. Gasoline engines generally cannot run at thermodynamically efficient high compression ratios, less they suffer destructive detonation, and will only operate over a relatively narrow range of mixture strength. Thus they have to be throttled to control output?and sucking in air past that throttle takes its own share of energy, meaning that the spark ignition engine becomes less efficient as the operating load is decreased.

By contrast, the diesel ignites its fuel by using a high compression ratio to bring the cylinder temperature up to the point the fuel begins to burn as it is injected, and it can be run happily part load just by reducing the amount of fuel injected?so no need to waste energy in throttling the intake flow.

The idea of putting a diesel engine in an aircraft is almost as old as the aeroplane, and by the late 1930s Junkers had made it commonplace, at least in some of the German manufacturers’ transport aircraft. However, it has never been easy to make a good diesel engine, as many would-be diesel aero engine manufactures have since discovered. You can fire up a gasoline engine by simply dripping fuel into a warm intake manifold, as the Wright brothers did with their almost unbelievably crude (but effective) four-cylinder job, fitted to the 1903 Flyer.

To make a diesel run, you need a finely engineered, precisely timed injection pump generating pressures of several thousand psi, delivering through micron-tolerance injector nozzles at all operating speeds and flow rates a fine, geometrically precise and consistent fuel spray?and this is only the half of it. For good reason, the development of diesel FIE (fuel injection equipment) has been the preserve of big industry, generally dealing in volume output well above the demands of GA.

So why not adapt one of those high-volume engines for aviation? This was Frank Thielert’s thinking in establishing the only truly successful pattern for a small aircraft diesel engine: take a highly-developed, mass-produced turbocharged diesel engine from one of the best automotive manufactures (Mercedes, as we now all know) and throw all your own specialist aircraft industry expertise into just the propeller drive and installation.

As we also now all know, it wasn’t quite as simple as that. Making the aircraft installation reliable took time?not the least of the problems being the relatively short life of the torsional vibration damper required in the propeller drive?and the basic weight of the standard car engine has always been a problem.

However, Continental and Austro have tackled these issues, improving reliability, reducing weight and increasing power output, making the diesel a much more competitive proposition.

Will there be a problem with diesel car engines now falling out of favour? I think not, for several reasons, not the least being that the diesel continues to offer the lowest combustion engine CO2 emissions (and world CO2 levels have again started to rise), there are measures to combat the NOx emissions of current concern?and emission control systems are becoming ever more efficient.

In any event, even if the automotive diesel engine was to be phased out, a few days production of obsolescent engines would be enough to provide for GA for decades. The diesel aero engine is here to stay!