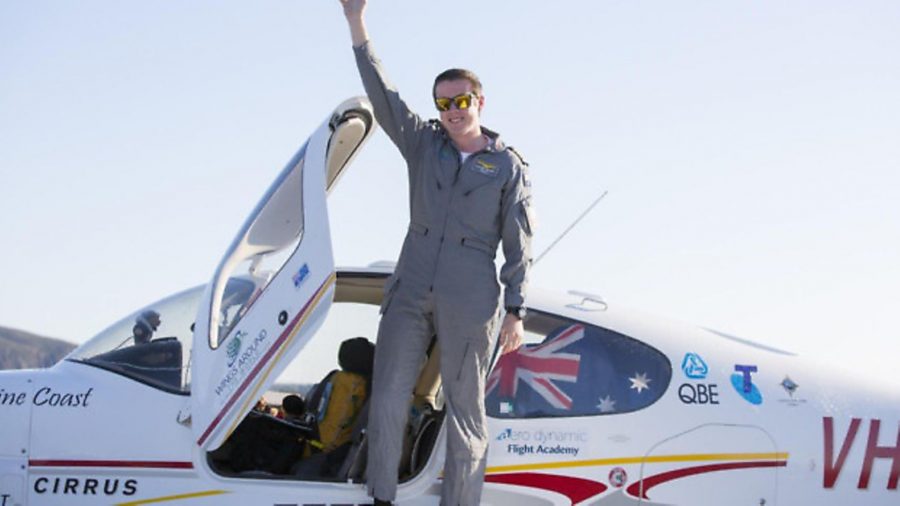 When Lachlan Smart from Queensland, Australia, landed at the Sunshine Coast’s Maroochydore Airport at the end of August, he had just completed a record-breaking, round-the-world trip in his single-engine Cirrus SR22.

Taking 54 days and covering more than 24,000 nautical miles, he stopped at 24 locations in 15 countries. At 18 years, 7 months and 21 days, Smart became the youngest-ever person to achieve such a feat, beating the previous holder, American Matt Guthmiller, by almost a year.

During his flight, Smart managed to take some stunning photographs of the sights he flew over. He claimed some of the highlights of his epic flight were flying over the White Cliffs of Dover, taking a week off to visit relatives in London, and going to a party on a beach in Cannes, France.

Yet not everything went smoothly. He met heavy storms crossing the Pacific Ocean to the US, including being delayed by 24 hours by a hurricane between Hawaii and California. Smart endured more than five hours of intense turbulence on the leg from Egypt to Oman, which just added to his woes that day, having waited two hours for his plane to be refuelled.

In Indonesia, he had to follow his instincts and ignore the instructions of local air controllers, believing they were sending him on a dangerous route. “I stuck to my training pretty well and when I saw what they were going to try and send me through, I thought, ‘They’ll be scraping me off the side of a mountain if I go that way’.”

He plotted his own course out of Indonesia and was soon over his homeland of Australia. A large crowd of family, friends, fans, government officials and a brass band celebrated his homecoming at the airport where he ended the final leg of his journey – the same place where it had all begun seven weeks previously.

“What a welcome!” said Smart once he had touched down. “To actually be here having flown around the world is just a great relief. I can’t wait to spend some time with my family and sleep in my own bed.” Smart insisted that his circumnavigation of the world wasn’t just for the world record, but he hoped it will inspire others to “chase their dreams”.

“Age is just a number and, really, if we want to achieve something, it shouldn’t be a barrier to success,” he said.

Also there to welcome Smart home was Sunshine Coast Mayor Mark Jamieson, who presented him with the keys to the city, and fellow Aussie pilot Ryan Campbell, the first teenager to set the world record. Smart, whose love of flying began at a young age when his mother would take him to watch aeroplanes take off from the local airport, had been greatly inspired by Campbell’s 2013 flight.

Smart now intends to take a short well-earned break and has no plans for another flying adventure, yet.

Find out more about Lachlan Smart’s round-the-world flight on the Wings Around the World website.