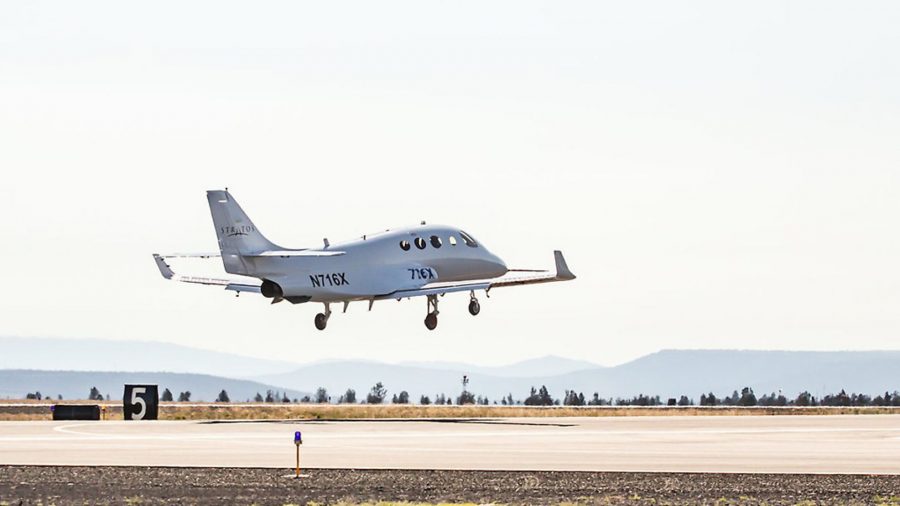 Flown by test pilot Sean VanHatten, the Stratos 716X is a spacious six-place jet with generous space for baggage.

The all-carbon airframe, single-engine jet is designed to cruise at 400 knots and the first flight was a full power takeoff and climb to 13,500 ft. A series of maneuvers were then conducted to evaluate handling characteristics.

The flight is the first of an extensive flight test program that will span the next several months.

The 716X is longer and has a wider cabin than the 714 Proof of Concept (PoC) aircraft introduced at Oshkosh in 2017.

“The first flight of the 716X went as briefed, which is a testament to the design quality and the professionalism of the crew here at Stratos,” said VanHatten.

“The aircraft is well harmonized and its directional stability was very good. The Stratos Aircraft team should be very proud of this accomplishment, and I’m looking forward to continued flight testing of this new design.”

Stratos CTO Carsten Sundin said: “When we introduced the Proof of Concept 714 aircraft three years ago, the marketplace interest was tremendous.

“It was clear that the market is looking for the performance and comfort we were offering, but in a true six-place aircraft. We have achieved this with the 716X. With a cabin width of 4.9 ft and height of 4.8 ft, there is plenty of room for passengers to relax on long flights.”

The Stratos 716X will be offered as an experimental kit build aircraft while the 716 will be certified by the FAA for production.

“We see producing a limited number of kit aircraft as a logical step towards certification. It will allow customers who don’t want to wait for the 716 certification an opportunity to own and operate a Stratos 716X much sooner, while we continue to develop our production processes,” said Sundin.

Test pilot Sean VanHatten has over 5,300 hours, with over 120 hours in the Stratos Proof of Concept 714. Sean has performed nineteen first flights and flown four prototype aircraft.

“This program will allow us to deliver the 716X to a select group of customers very soon while we continue with the program for the 716 Certified aircraft.

“The aircraft performed just as predicted and the initial feedback is that the handling qualities are excellent. We look forward to now expanding the flight envelope and demonstrating the aircraft’s full potential.”