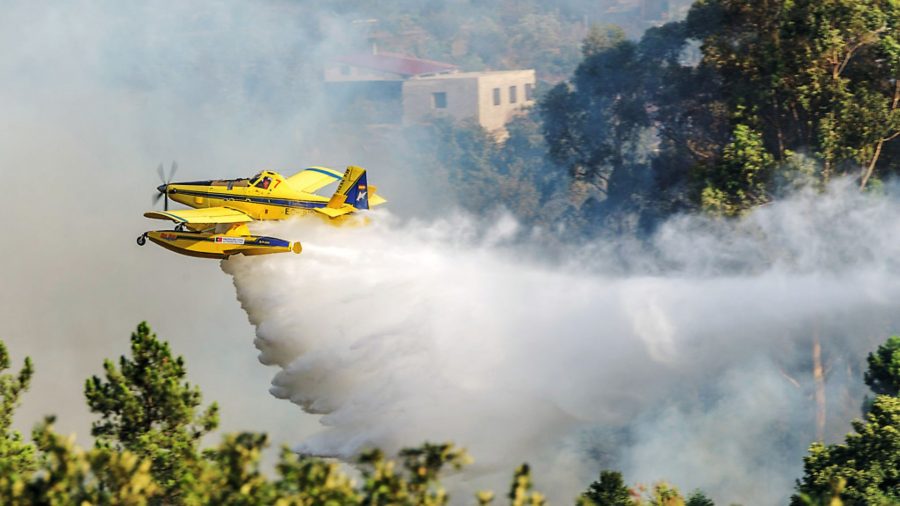 Fighting fires from the air is an extreme form of aviation – and not for the faint-hearted. By F George Johnson CS

To most Brits, Portugal is synonymous with holidays: hot summers, good food and wine. If you are into aviation, however ? as one can assume if you are reading Pilot ? Portugal would definitely not come top of the list as an exceptionally aeronautically-intense part of the world. But there is one aspect of aviation in Portugal that does not exist in the UK: aerial firefighting.

Due to a combination of hot and dry weather, a vast amount of woodlands, and some strange psycho-social peculiarities (which I shall not discuss here), from June until mid–October hundreds of wildfires break out all over the country. As recently as June this year a gigantic forest fire had tragic consequences. Around sixty people trying to flee in their cars were caught on the road when a fire storm exploded, enveloping all and everything in its way.

Aerial firefighting has been operating in Portugal for over four decades, using both helicopters and fixed-wing aircraft. Canadairs and Fire Bosses are presently in service. I’m going to describe fighting fires with the Fire Boss, and some of the finer points needed to carry out the firefighting task efficiently and safely.

The Air Tractor AT–802F Fire Boss was the first aircraft to be designed specifically for firefighting. Prior to that, there were only adaptations of crop-dusters or transports, or even bombers. The first prototype Fire Boss flew in 2003, and up until June 2017 close to fifty have been built.

It can be transformed into a purely land version, the AT-802, with the same capabilities in relation to fuel and water capacity but with an increase of forty knots in the cruise (the large Wipaire floats slow it down considerably).

Our Fire Bosses are single-seat, although there is a twin-seat version, and even an armed version for counter-insurgency activities. Its 1,400 litre fuel capacity allows approximately four hours useful flight time. The hopper tank is capable of holding 800 US gallons (3,028 litres) of water and can be adapted to carry fuel for long range ferry flights.

The Fire Boss is powered by the ever-reliable Pratt & Whitney PT6-67F, delivering 1,600 shp, and a five-blade Hartzell prop. It is always flown VFR and is a total ‘stick and rudder’ aircraft that has to be flown using stick and rudder, like a glider?although it has a quicker response.

In flight, constant rudder-trim inputs are needed for every small alteration of speed or power adjustment. When you see it in the air, the perception is that it is as small as any single-engined aircraft, however once up close its dimensions are quite revealing. In fact it is the largest and heaviest single being produced nowadays, with a maximum takeoff weight of 16,000 lb.

Six Fire Boss amphibian aircraft have been stationed at three airfields in the centre/north of Portugal, providing quick response intervention in case of fire anywhere in the country. The Portuguese Civil Protection Authority has quite an ingenious set-up in place for these aircraft, as there are innumerable dams, rivers and lakes all over the country, which have been surveyed and approved for water-landings and scooping operations.

When fires break out, for whatever reason, they will usually be within an acceptable operating distance from these many water-landing sites i.e. under fifteen minutes flight time from the fire, and on average less than thirteen nautical miles away.

From the first call with the coordinates, and including a quick briefing and evaluation of the fire and water-landing conditions, a fifteen minute max scramble time is expected?and usually they are airborne within eight minutes.

The ideal way to operate is first for a pair of Fire Bosses (they always fly in pairs) to take off and proceed to the fire in its initial stages and start smothering it with continuous water-bombing runs via repetitive water-scooping from the nearest dam or lake.

Secondly, a support helicopter will arrive (Écureilles or Bells) with a water bucket and a group of five or six firemen who will attempt to contain the fire as far as may be practicable.

The scooping operation itself is very dynamic and stressful:

– Deploy the scoops via a trigger on the stick

– Power up the engine, whilst keeping the trigger depressed until the specified quantity of water is in the tank (800 US gal max), and maintain hard stick back in the process, not accelerating above 65kt?quite a challenge, as the aircraft insists on nosing down and adopting an ‘I want to submerge’ attitude

– Take off, nudging the stick forward to allow an increase to a safe airborne airspeed.

An experienced pilot can achieve all this in less than a twenty-second water run.

The C of G is always within limits but the weight alteration in such a small amount of time is a handful for any pilot and makes him break into a sweat quite readily. It is not unusual for a pair of Fire Bosses to perform twenty bombing runs each on one fire in one mission.

The scenarios that pilots sometimes encounter are not for the faint hearted, as water-bombing runs are performed between 60-90ft AFL (above fire level), either over or as close as possible to the flames. If you fly much higher than this, the water could evaporate before it hits the target.

The Fire Boss is sometimes taken into truly ‘infernal’ situations with flames rising over 100ft, and smoke thicker than fog, seriously hampering visibility. Turbulence is usually extremely intense, in addition to the windy conditions that fires usually create, especially in mountainous terrain. With all of this, on top of the cacophony of communications between aircraft, choppers, and also with firemen on the ground, a pilot can easily be led into spatial disorientation.

The water-bombing runs are performed with 10o flap at approximately 110-115kt IAS in a straight and level flight path, not descending except in mountainous terrain where extra considerations come into the overall decision.

The FRDS (fire retardant delivery system) can be selected to dispense a water flow of different gradations, from a long and slow flow to a brusque and immediate release. In this latter case?the most common?the stick has to be pushed hard fully forward to stop the aircraft entering a potentially dangerous and extreme nose-up attitude.

In some situations?usually mountainous terrain?once a bombing run is initiated the pilot is committed, and the water will be dropped even if he realises that it will not hit the intended target area. If the water is not released, the extra weight and the relatively slow speed can easily mush the aircraft into the ground as it pulls up. A few Fire Bosses have been lost in water-landing or scooping operations but not in Portugal (yet).

Aerial firefighting is, not to put it too strongly, a dangerous activity! It is performed close to the four elements: earth, water, air and fire.

Despite every precaution being taken?and all involved undergoing intense training?when intervening in forest fires, close encounters with trees are not rare, as with mountainous terrain, therefore some total losses, accidents or serious incidents are to be expected.

Fire Bosses in Portugal currently operate from bases in Viseu, Vila Real and Proença–a-Nova, with a total of six operational aircraft and one reserve. To give an idea of value for money, the price for one Canadair (an excellent twin-engined firebomber) would buy aproximately ten Fire Bosses.

Each base is manned, from early morning to sunset, by two pilots, one mechanic, and one operator who is responsible for assisting the mechanic, turn-arounds, fuelling, and filling water tanks if scooping is not used.

In 2017, our six Fire Bosses flew a total of 2,025 hours, performed 9,620 water-bombing runs, with an average elapsed time of eight minutes between scooping point and fire.

In total 28 million litres was dropped on fires at a rate of 24,000 litres per hour.

Although it is a seasonal activity here in Portugal, we have quite a mix of nationalities who choose to fly the Fire Boss in our country: Portuguese, Spanish (Catalan, Basque, Andalucian), Lithuanian and one lonely Brit, who is also responsible for flight safety.

The Latin motto of our aerial firefighting service is Servando Virentia Nostri Orbis Terrarum which means something like ‘Keeping our world green’.