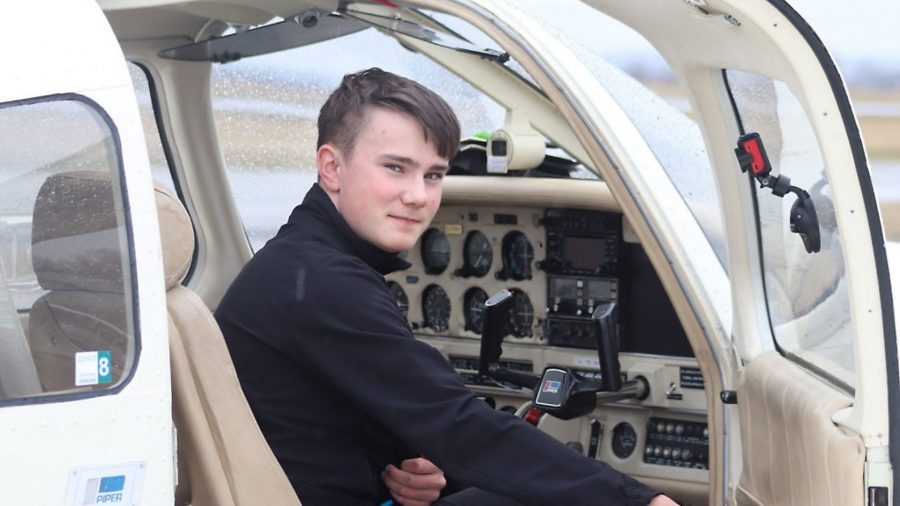 Despite having to wait almost three years before he can legally drive a car, a 14-year-old teen from Southport, Merseyside, has become the youngest person in the UK, and one of the youngest in the world, to fly solo in a powered aircraft

Junior aviator, Maksim Ferguson, took to the sky at Spectrum Airways in Burlington, Ontario, Canada on Monday 15th April to fulfil his dream of solo piloting a powered plane at 14 years, one month and 28 days old.

Marking what was his first ever solo flight, saw Maks take off alone in gusty conditions in a Piper PA-28 single engine, four-seater aeroplane, where he ascended to c.1,000 ft., navigated the chosen flight path and communicated with Canadian air traffic control, before successfully touching back down at the Burlington airstrip.

Maks said: “I wasn’t expecting to go solo when I did.

“They had cancelled nearly all the flights as the weather was so bad and I thought that any opportunity to fly had gone out the window. Then we got a call from the Chief Flying Instructor saying let’s head out, who then said I was ready and I could go solo.

“It all happened so fast and I was so nervous sitting there on the runway in the plane by myself. It also didn’t help that my dad and all my Instructors were stood right beside it filming me and taking pictures!

“This whole experience is a massive tick off my flying bucket list. I want to go solo in the UK as soon as I turn 16 and we will definitely be coming back to Canada before then so I can go solo again.”

Before Maks could take to the sky, there were various hurdles that he had to overcome, including passing a Class 3 Canadian Medical Certificate, reaching the minimum 10 hours of local flying time in Canadian skies, which includes performing stalls, spins and spiral dives, passing his PStar Examination and the ROC(A) and English Proficiency Test to correctly communicate with Canadian air traffic control and delayed take offs due to snowy weather conditions and high winds.

The high-flying teen will one day be in the driving seat of far larger aircraft as he dreams of eventually becoming an RAF pilot or commercial airline pilot.

“The funny thing is, my dad was once terrified of flying, but he overcame his fear and got his pilot licence when I was really young. I’d grown up around planes because of my dad and absolutely loved flying from my very first lesson,” said Maks.

Maks’ father and fellow pilot license holder, Vince Ferguson OBE, watched nervously from the sidelines as his eldest adventurer took off alone on his first ever solo flight.

He said: “I still remember the day I took the stabilisers off Maks’ bike when he was a little boy and I felt that same anxiety as when he went cycling away from me all those years ago, albeit on a far greater magnitude. I was petrified, but Maks took the whole thing in his stride and flew like an absolute professional.

“Maks’ mum and 11-year-old sister couldn’t bear to be here to watch alongside me, with their nerves getting the better of them, but they were the first people we called as soon as Maks touched down.

“He’s a far better pilot that I am and even pulls me up on occasion on things I could improve on, and this remarkable achievement is one of many and there is no doubt in my mind that Maks will succeed.”

Flying has been a passion of the Year 9 Scarisbrick Hall School student since he was a toddler, having caught the family bug for aviation when he was just five-years-old.

Maks took his first official flying lesson at ANT (Air Navigation & Trading) in Blackpool when he was eight and he’s since logged 40+ official and numerous unofficial flying hours in various two and four-seater aircrafts.

Maks’ flying instructor, Russell Whyham from ANT, said: “Maks is by far the youngest pilot we’ve ever trained in our 70+ year history. He’s been obsessed with aeroplanes since his first lesson and he’ll hopefully one day join the elite list of ANT student flyers who go on to become commercial airline pilots or similar.

“His level of training, skill and dedication has meant that he’s been ready to fly solo for a number of years now and the only thing that’s held him back is his age.”