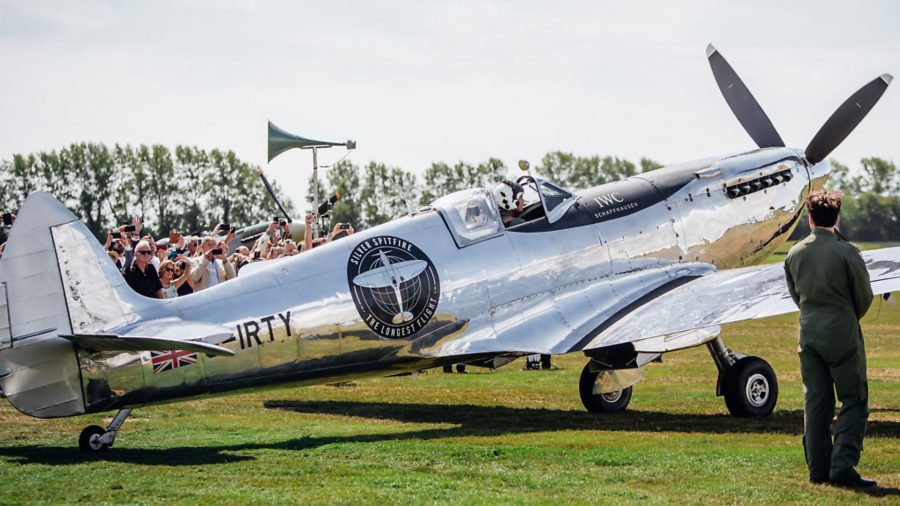 On 5 August Boultbee Flight Academy’s highly polished, Mk IX Spitfire G-IRTY departed Goodwood Aerodrome in the hands of Matt Jones at the start of its ‘Silver Spitfire – The Longest Flight’ expedition around the world

The flight follows two years of preparation during which more than a dozen specialists have worked on the restoration and preparation of the aircraft, which was originally built at Castle Bromwich in 1943.

“The last few months have been intense, and full of activity… We’re thrilled that we can finally begin our great adventure and share the glory of the Silver Spitfire with the rest of the world.

“It’s a massive undertaking and a huge privilege to be involved in such a project. Now it’s time to make history,” said academy founder Steve Boultbee Brooks, who will be sharing the piloting duties with Matt Jones.

“I am excited to witness the start of the expedition. Never in the history of aviation has a Spitfire embarked on such a long and arduous journey.

On the flight around the world, the two British pilots will cover more than 23,000nm and visit thirty countries.

The route will initially take them to Iceland, and from there to Canada and the USA.

The plan is to complete the flight in 100 or so individual segments, suggesting that while the total distance covered may set a new record, the one for the longest distance non-stop Spitfire flight of 1,620nm (from Dakar, Senegal across the Atlantic to Natal in Brazil) set by Capt James Story, flying a PR XI on 3 May 1947, will remain unbroken.