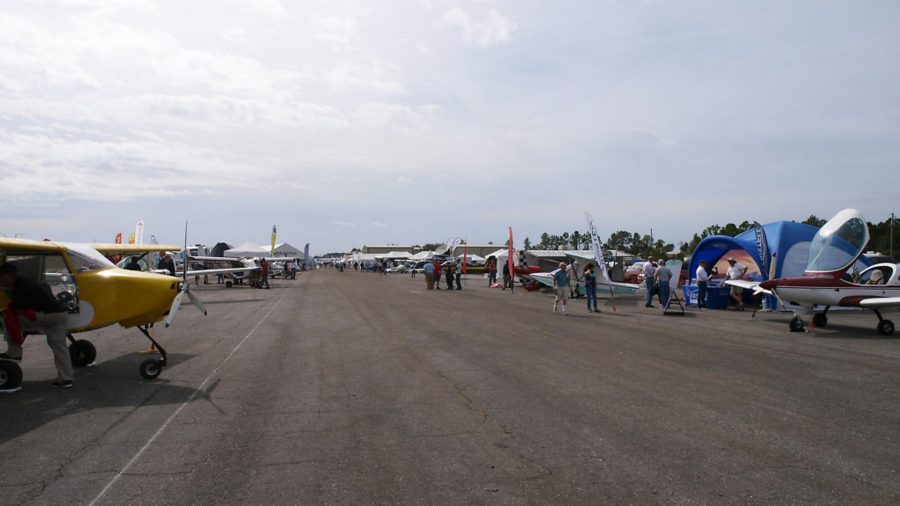 With Sebring out of the running, the war of the Florida events is over and DeLand becomes the Sport Aviation Showcase | Words & photos: Marino Boric

The DeLand Sport Aviation Showcase is now over for another year, but its victory in what you might call the battle of LSA fly-in events in Florida was a bitter one.

This year DeLand was not blessed by the usual sunny Florida weather, but punished with three days of solid grey clouds overhead and an ever-present threat of rain.

Unusually cold weather, with temperatures of around 10°C, felt even chillier due to the steady winds?the kind of weather I thought I had left behind in Northern Europe on departure.

And when I arrived in Orlando the day before the event, they were talking on the morning news about seventy per cent of the USA seeing temperatures below freezing?not the best prospect for an outdoor aviation exhibition.

The exhibitor booking numbers were excellent, and this fourth edition of the show was supposed to be a triumph?but the weather and the cold wind denied any opportunity of record attendance.

The Champagne will have to remained unopened until next year.

Held in early November, the DeLand Sport Aviation Showcase (DSAS for short) and the Sebring Expo held in late January used to compete both in terms of proximity and timing.

It was quite obvious that only one Florida event could survive in the long term. DSAS held many advantages: most exhibitors thought that the timing was better and reckoned the exhibition layout to be almost perfect, and the Tower-less airport allows unrestricted flying.

On top of that, the millions of dollars invested?and still being invested?by the county in hangars and other infrastructure promise a successful growth of DSAS’s Sport Aviation Village.

In the end, the battle was conceded by the organizers of the Sebring event, who announced the end of their show.

DeLand’s original, longer event title was ‘Sport Aviation Village & Showcase’, the motto ‘all Sport Aviation, all in one place’ neatly summing up the organiser’s ambitions.

The Sport Aviation Village under development at the site is intended to provide a ‘one-stop recreational flying shopping centre’.

The aim is to assist manufacturers both within the USA and abroad by offering customized transport and handling solutions (see ‘Development in four phases’ opposite).

Other events offer pure airshows and attract crowds of people who are not primarily aviators. This is fundamentally different in DeLand.

The Showcase is intended for pilots and aviation professionals as a natural support activity for the Light Sport businesses based at the airport.

Previously, most exhibitors and manufacturers offered demonstration flights, and aeroplanes, autogyros and motor gliders were flying almost every day?a great advantage for an a pilot-centred event.

Demo flights were rare this year because the cloud base was stuck at 900 to 1,000 feet. It is hoped that normal Florida weather will prevail in 2020!

No matter what, the flying folks who flock each year to DeLand didn’t allow a little rain to dampen their spirits and the three-day event was always busy, not least with numerous forums and workshops addressing topics in the Sport Aviation field.

Amongst others, the EAA and Zenith Aircraft presented daily workshops and seminars.

The workshops offered instruction on the use of sheet metal in home building and the seminars covered a vast variety of subjects, featuring presenters from the EAA, Garmin, Zenith Aircraft, Pipistrel, Bristell Aircraft, Rotax agent and aircraft manufacturer Lockwood Aviation and others.

Despite the low level of visiting aircraft traffic, exhibitors reported solid interest and more than a few sales – and the overall outlook was far lighter than the dark skies might suggest.

DeLand Municipal Airport is conveniently located an hour’s drive from downtown Orlando in the west and half an hour from the well known Daytona racetrack and the ocean beaches to the east.

For more information on the Village and event, see: www.sportaviationshowcase.com