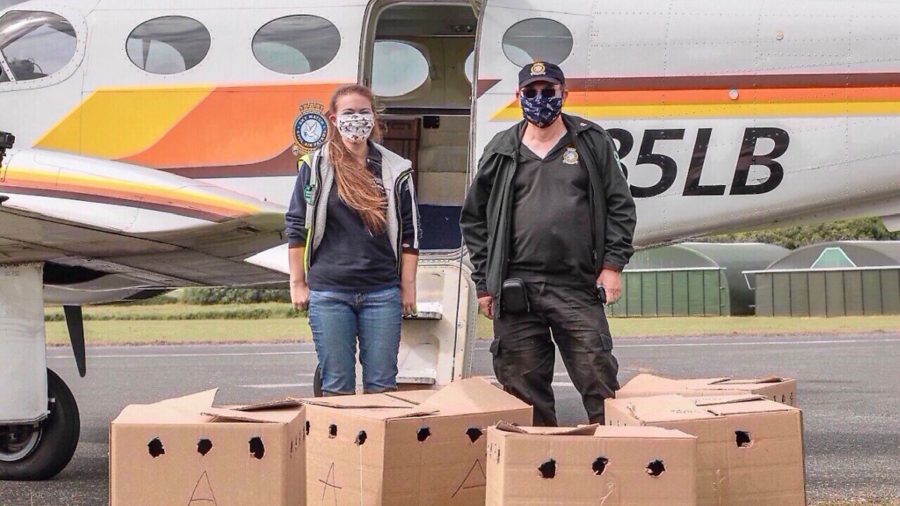 With road transport out of the question due to the coronavirus pandemic, it was agreed that seven sea eagle chicks should be transported by air from Inverness Airport in the Highlands of Scotland to the airfield at Bembridge on the Isle of Wight

UK Civil Air Patrol chief pilot, Graham Mountford, together with his daughter Helen, a zoo keeper at Shepreth Wildlife Park, are both animal conservationists and are particularly well known for transporting seal pups on behalf of the British Divers Marine Life Rescue.

At Inverness the flight, reminiscent of the flights by the RAF and the RNoAF in the 1970s, was supported by Highland Aviation and at Bembridge the aircraft was met by Tim Mackerill of the Roy Denis Foundation and Stephen Egerten-Read of Forestry England.

The flight from Inverness to the Isle of Wight, which would have taken a minimum of 18 hours by road, with numerous welfare stops, took just 2 hours and 40 minutes in Graham Mountford’s Cessna 340 and, most importantly, the birds were totally unphased by their 500-mile flight.

The White-tailed Sea Eagle, also called the sea eagle, is the UK’s largest bird of prey with a wingspan of some eight feet. It’s often referred to as the ‘flying barn door’.

The sea eagle was last seen in England, on the Isle of Wight, in 1780 and it became extinct in the UK, in Scotland, in 1918. In 1975 a full-scale reintroduction, supported by the Nature Conservation Society, the Royal Society for the Protection of Birds, together with other conservation groups, saw the White-tail Sea Eagle once again flying in the skies over Scotland.

This programme, supported by the Royal Air Force and the Royal Norwegian Air Force saw 82 chicks brought to Scotland from Bodo in Norway, close to the Arctic Circle.

In 2019, with the support of the Roy Denis Foundation, the reintroduction programme was extended to England with a five-year plan. In 2019 six young birds were released on the Isle of Wight with an intention to release a further seven in 2020.

Then the COVID-19 pandemic struck the UK in March and the country was placed in ‘lockdown’.

Transporting young sea eagles from Scotland to the Isle of Wight by road, an 18-hour journey, was now impossible and the new conservation project was in danger of foundering just a year after it had begun.

After the flight, Tim Mackerill said: ”Both the Roy Denis Foundation and Forestry England are immensely grateful to Graham and Helen Mountford and to the UK Civil Air Patrol.

“Without their timely intervention the project to re-introduce the magnificent White-tailed Sea Eagle into England would not have taken place this year and the whole conservation project would have suffered a significant set-back.”

The UK Civil Air Patrol chief executive for England and Wales, Jeff Smith, added: “I love the irony that the first flight for these beautiful sea eagles was in an aircraft at 10,000 feet.”