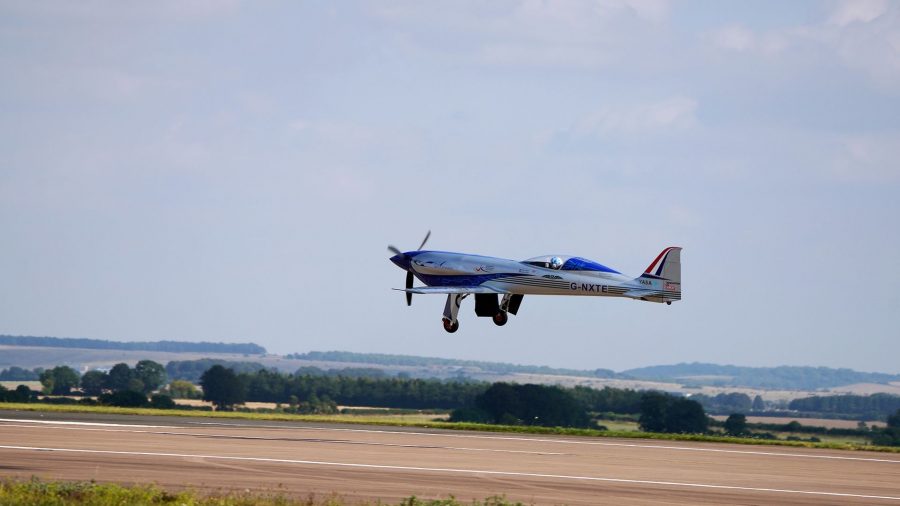 Rolls-Royce’s electric speed record contender made its maiden flight on 15 September. The battery-powered machine took off from the Ministry of Defence’s Boscombe Down airfield and flew for approximately fifteen minutes, piloted by the company’s Chief Test Pilot, Phill O’Dell. The flight ‘marks the beginning of an intense flight-testing phase in which we will be collecting valuable performance data on the aircraft’s electrical power and propulsion system,’ declares Rolls-Royce.

The aircraft differs from most other electric prototypes in that it was designed for high performance, being based on the Reno air racer Nemesis NXT. It wears a paint scheme reminiscent of the Schneider Trophy-winning Supermarine S.6B and is powered by a 400kW electric propulsion system, which Rolls-Royce describes as having ‘the most power-dense battery pack ever assembled for an aircraft’.

The company is planning to make an attempt on the world speed record for electric aircraft, and is hoping to exceed 260kt. Warren East, CEO of Rolls-Royce, said: “The first flight of the Spirit of Innovation is a great achievement for the ACCEL team and Rolls-Royce. We are focused on producing the technology breakthroughs society needs to decarbonise transport across air, land and sea, and capture the economic opportunity of the transition to net zero. This is not only about breaking a world record… The advanced battery and propulsion technology developed for this programme has exciting applications for the Urban Air Mobility market and can help make ‘jet zero’ a reality.”

Rolls-Royce intends to use the ACCEL technology, developed as part of its ‘sustainable aviation strategy’, to offer a complete electric propulsion system for aircraft, including electric vertical takeoff and landing (eVTOL) ‘air taxis’ and commuter aircraft. Partners in the initiative include Electroflight, which built the battery, and electric motor and controller specialist YASA.

Rolls-Royce and Italian aircraft manufacturer Tecnam are also reported to be working with Scandinavian regional airline Widerøe to produce an all-electric commuter aircraft, which be ready for revenue service in 2026.