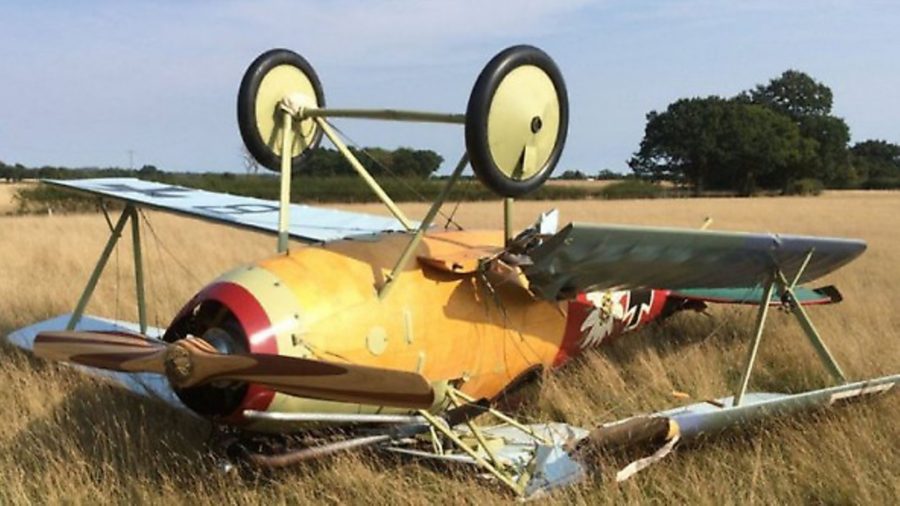 The engine failed as the Albatros DVa returned from northern France, where it took part in Battle of the Somme centenary commemorations

The pilot escaped unscathed from the crash but The Vintage Aviator Limited replica, operated by the WW1 Aviation Heritage Trust (WAHT), finished upside down in a field near Ashford in Kent.

It was nearing the end of a flight across the English Channel to Headcorn Aerodrome when engine failure caused the single-seater plane to crash land at about 2.20pm on Thursday 15 September.

Hours earlier, the German Albatros DVa had been flying over Caterpillar Valley cemetery in Longeueval, France, to mark New Zealand’s involvement in the Battle of the Somme. In front of dozens of dignitaries, including Prince Charles, the single-seater joined another World War I replica plane to carry out a poppy drop.

Duty controller at Headcorn David Kember said the pilot had attempted to land in a field, but the plane caught a fence.

Despite “substantial damage to the plane’s wings”, according to Kent Police, the Albatros is repairable. The pilot was also lucky to escape serious injury.

“Both will be back in the air at the first opportunity,” said WAHT chief trustee Dick Forsythe.