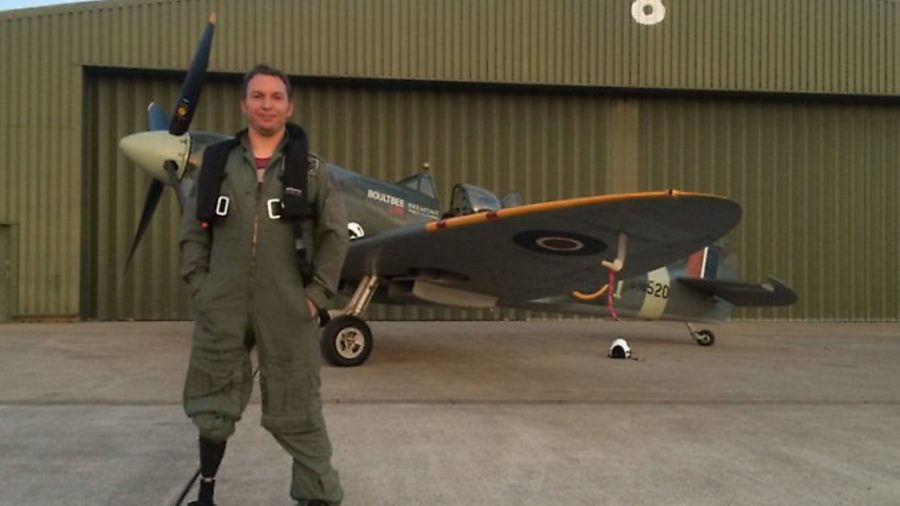 When he lost his leg after a motorcycle accident, Alan Robinson though he would never be a pilot

One of two successful candidates in The Spitfire Scholarship, a private initiative supported by Prince Harry and the Royal Foundation’s Endeavour Fund and run by Boultbee, Alan is the first to complete the goal.

In 2011, he was involved in a motorcycle accident and as a result had his right leg amputated above the knee.

A lover of all things aviation, he feared this would end his long held dream of becoming a pilot. ‘A little over five years ago I woke up in a hospital bed to find my leg gone,’ he says.

‘The simple things previously taken for granted were to become the greatest challenge, such as walking. I was sure I wouldn’t be able to ride a bike again and thought that gaining a pilot’s licence would be out of the question. I thought being unable to achieve my dream would probably be a regret that would haunt me for the rest of my life.’

‘We conceived the idea of the Scholarship three years ago and had immediate support from the Endeavour Fund, and particularly Prince Harry,’ says Boultbee Managing Director Matt Jones.

‘Picking the two successful scholars from the exceptional field of candidates that applied was very difficult indeed. However, Alan’s impassioned and emotional closing interview set him apart from the rest. Two years later and having been a part of his journey, to watch an initially extremely inexperienced pilot now soloing the Spitfire is one of the highlights of my own flying career — especially seeing what it meant to him.’

Learning about the Spitfire in the last month of the scholarship has been ‘utterly obsessive’, admits Alan.

‘If it’s not airspeed, oil pressure or emergency procedures it’s not been welcome in my head. I have thought about nothing else. Then, when the moment came, the emotion of five years of highs, lows, frustrations, successes, doubts, fears, the desire to make my family proud and honour the memory of my father, was all compressed into ten minutes of flying. It was utterly overwhelming and once the final switch had been turned off the tears came. It’s impossible to put the experience of this achievement into words. How it feels and what it means. Put simply I have achieved a childhood dream, but as a boy I could not have known a devastating accident would be the catalyst to that dream becoming a reality.

‘I feel a greater than ever respect and admiration for the veterans who flew this aircraft in combat and defended our country so bravely. I feel enormously privileged to have met some of them and hope to play a part in preserving their memories and stories forever as a part of my own flying. I also plan to become an ambassador for disabled aviation, proving a focus on ability not disability and challenging the perception of disability among able and disabled people alike.’

Reflections on the Battle of Britain