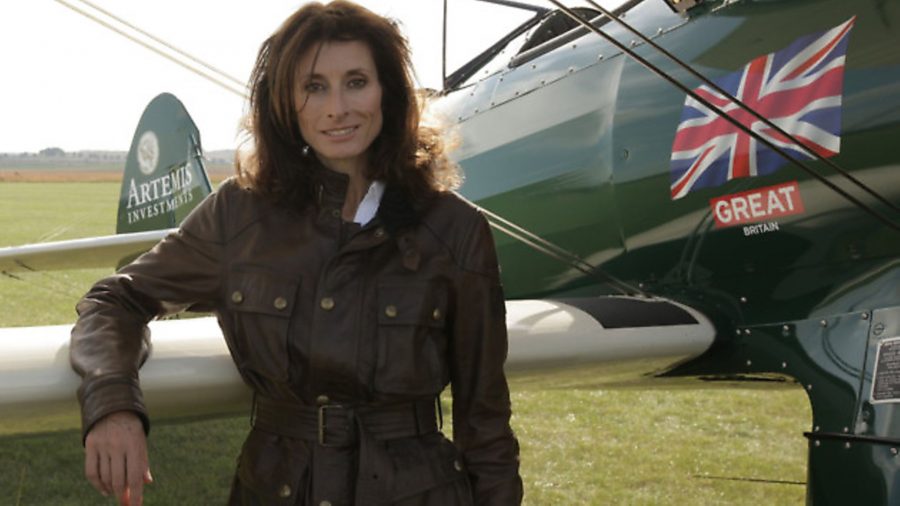 In 1928, a record was broken when Lady Mary Heath became the first person to fly solo from Cape Town to London. 85 years later, ‘Bird in a biplane’, adventurer and aviator Tracey Curtis Taylor, set out in a vintage Boeing Stearman to recreate that very same journey. Her inspirational eight-and-a-half week, 10,000 mile journey was turned into an hour long documentary; ‘The Lady Who Flew Africa- the Aviatrix’. We caught up with Tracey to find out the highs and lows of her journey and the inspiration behind her decision to undertake this courageous adventure. What first drew you into the world of aviation?

My first impressions of aviation were through film and literature. I adored ‘Those Magnificent Men in their Flying Machines’ and have seen it at least a dozen times. When I was eleven I also read the ‘Flambards’ trilogy which takes place before and during the First World War. One of the protagonists was besotted with flight and is killed in a flying accident. Many years later, my best friend named her first son after this character and when I was later based with the Shuttleworth Collection at Old Warden with my Ryan PT-22, her comment when she came to see it was simply, “It’s Flambards”.

In more practical terms, I had my first experience of flight on an airliner to Canada in the summer of 1978. My twin sister and I were going back for a holiday (we had spent eight years of our lives there from 1964 to 1972). It is fair to say that I was mesmerised by this and was glued to the window the whole way looking out at the wing and watching the scenery below. During this holiday I went on an introductory flight in a light aircraft and ended up spending the rest of the afternoon with the pilot who took me on a chartered flight to Vancouver Island. I was sixteen at the time and clearly difficult to shake off. I also did a day of hang-gliding on my first visit to New Zealand in 1981. I crashed twice before I got the ‘hang’ of handling a large wing. Who have been your biggest inspirations in life and flying?

Some of my biggest inspirations in life have been the first African and Polar explorers, the early mountaineers, and of course, all of the pioneering aviators, especially the women. I think their personal courage and flying achievements were exponentially greater given that they were up against a totally male establishment which was often obstructive and dismissive. They are some of the greatest female role models in history. Why do you have an interest in vintage aircraft specifically?

I love old aeroplanes because they are just so beautiful and aspirational. I suppose it is the combination of early piston engines – the basic but ingenious mechanics – with the artistry and craftsmanship of figured wood and fabric wings, the hand stitched leather detail and all the wires and struts. They are somehow more than just machines – for me they are the embodiment of man’s desire to fly. You recently flew an historic recreation of Mary Heath’s record-breaking 1928 flight from Cape Town to Cairo in a Boeing Stearman biplane. What motivated you?

I have wanted to fly across Africa since seeing the film ‘Out of Africa’ in the mid 1980s. By this time, I was learning to fly in New Zealand and had already spent a year working and travelling in Africa. The flying sequence with the Tiger Moth in that film remains one of the most transportingly beautiful and romantic scenes I have ever seen. I wanted my life to be like that! Then I came across the Lady Heath story six years ago, and that crystallised the decision to do the flight and tell the story of this unsung and forgotten aviatrix. How did you prepare for the journey?

It took another four years to pull all the elements together for the flight. This variously included sourcing a suitable aeroplane, raising serious sponsorship money and finding a film company to document the story. I had a very good project manager and a huge number of friends supporting me although I think they had private doubts about whether it would actually happen. With regards to the actual expedition, I had a support aircraft (a Cessna Caravan) and for the most part a fantastic team which included the chase pilot, a logistics manager, an engineer and a four-man film crew.

In terms of my own personal preparation, in truth I did very little. I simply didn’t have time. I was busy selling a house and all my worldly goods, trying to put fifty hours on the Stearman to run in the engine prior to shipping it to Africa, and a million other things. It was a very stressful time, and I was exhausted before we even set off on the expedition. Not ideal, really.

In 2012 as a kind of practise run for my own flight, I was invited by ExecuJet (who were one of my sponsors) to help crew an An-2 from Kiev to Cape Town. This is another story, but it was an epic three month flight through the Sahara and down the west side of Africa. The Russian crew have become lifelong friends. Most memorable moments from the flight?

The most memorable moments of my own flight were flying with the wildlife – circling low above whales off the coast of South Africa – and again, low flying over elephant, wildebeest, zebra and giraffe over the great plains of the Serengeti and the Masai Mara. The best day, indeed the most fantastic flying I have ever experienced, was flying through the Rift Valley and low over the soda lakes in formation with a Piper Cub flown by Steve Parkinson of Phoenix Aviation in Nairobi (they also provided our Cessna Caravan). I will remember every minute of this forever.

The worst moment of the whole trip was seeing the dead rhino at Lewa in Kenya. It had been slaughtered by poachers the night before, mowed down by 37 rounds from a machine gun, then half it’s face had been hacked away to remove the horn. It is the most viscerally sickening thing I have ever witnessed. It was a young, pregnant female. How were you received in the places you landed?

I received a brilliant reception in most places, especially Port Elizabeth in South Africa and Nairobi, where the team from Artemis Investments, my main sponsor, was there to meet us. But I had some problems too, notably at Entebbe in Uganda where I was met by the military police for inadvertently overflying the presidential palace. I was terrified that they would impound the Stearman and arrest me but we were able to sort things out after about three hours of interrogation. Things got more difficult as we headed north through South Sudan, the Republic of Sudan and Egypt but in general people were very kind and supportive. If you hadn’t been flying solo, who would have been your ideal co-pilot?

Although this was primarily a solo flight, certainly at the outset, I often took members of the crew and sponsors with me in the Stearman for reasons of expediency or indeed just so that they could share the experience. I did one flight with Bill Sykes, a retired air force pilot and local historian, who was based in Bulawayo and we tried to find the site where Lady Heath crash landed in 1928.

I also did two wonderful flights with Ian Craig over the Lewa Conservancy where we flew just above tree level, skimming along rivers and through low lying valleys spotting rhino and elephant and the skeletal remains of murdered animals. This is one of the most beautiful parts of Africa, yet it is also a harrowing killing field where a huge 24hr a day conservation effort is being made to try and protect the wildlife from poachers. It was a real eye-opener to see this first hand and to see the fantastic work that the Tusk Trust is doing in these communities.

If I had to choose a co-pilot for my next flight, I think it would be huge fun to take Prince Harry but that might present a few security issues. I have a great friend at Boeing, Rick McCrary, who is a retired SR-71 Blackbird pilot, so a bit of a hero to me. He appreciates how special the Stearman is, so I think he would be top of my list for people to take. Any plans for a new adventure soon?

Yes! I am planning another flying adventure. I have a busy summer of flying ahead here in the UK but will let you know when I have my ducks firmly in a row… Or visit www.theaviatrixfilm.com to get a copy of the DVD.