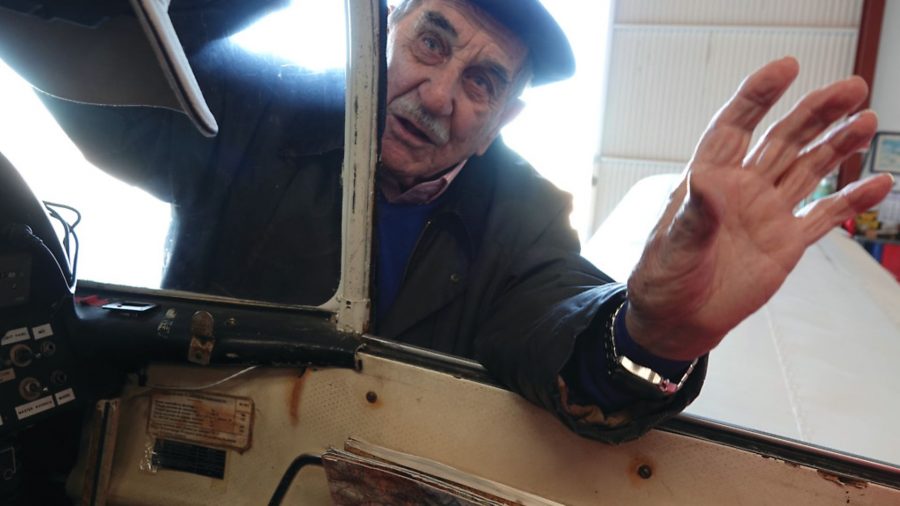 He has over 23,000 hours in his logbook, of which 130 were flown in the last fifteen months. Not that incredible for an aviation professional, you may think, but with a curent PPL and class two medical at 96, Laureano Ruiz Liaño is probably the world’s oldest active pilot.

Laureano was born on 15 June 1924 in Santander (northern Spain). A wonderful chap full of knowledge and information, he got the aviation bug while growing up in northern Spain.

Back then a famous pioneer pilot called Pombo was flying in the area, and the aeroplanes started drawing the attention of the little boy.

So, he got into aviation as soon as he could?keep in mind that Spain is not a particularly aviation-oriented country, and it wasn’t easy to fly just after the Civil War.

But on 16 September 1943, the nineteen year old boy won his gliding ‘A’ certificate at the flight school of Colomba de Somoza, in the Spanish region of Leon. After that he started flying at the wonderful glider site of Monflorite in Huesca, just by the foot of the western Pyrenees.

It was there that the young Laureano got his additional glider licences: a class B certificate, then a class C on 19 July 1944 and, three days later, his Silver C with a flight of over five hours.

All of that in less than a year! Then, in June 1946 he received his first class glider navigation permit and in the following two weeks he flew 32 hours, several flights lasting between five and eight hours.

From then on he started to play an increasing role in the growth of Spanish general aviation. In 1948 he co-founded the Santander Aero Club and, with the help of three French friends, brought to Spain the plans to build an Autoplan, which he eventually completed in 1952?the aircraft being a Pou du Ciel (Flying Flea) lookalike.

Construction of the Autoplan took place in downtown Santander, and taking the completed aircraft to the aerodrome was in itself a big challenge. Laureano ended up in the local paper when they towed it behind a Vespa scooter, Laureano hanging on to the tailwheel.

In the meantime, in 1950, Laureano had obtained his PPL, logging a total of fifteen hours and thirty minutes in de Havilland 60-G-III Moths (EC-AEX and EC-AFS) at La Albericia aerodrome. From then onwards his aviation pursuits became even more adventurous.

In 1953, for instance, Santander’s casino became in part an aircraft manufacturing facility, Laureano using its basement to build a Jodel D112.

During this period Laureano also recovered a wrecked Microplan biplane from Biscarosse air base, rebuilding it on site in record time then flying it to Santander, only to have an engine failure close to his destination which forced a landing on a beach.

Laureano also helped found what became Aero-Difusión SL through homebuilding aeroplanes without permits to fly. In fact, no one had ever done such a thing before in Spain, so permits did not exist?and Laureano was caught out by no less a person than General Gonzalez Gallarza, Minister of the Air at the time and a very close ally to General Franco.

General Gallarza made a surprise arrival by DC-3 at the Aeriodrome of la Albericia, where Laureano’s small team was located, and caught several men working on an aircraft with the hangar doors open.

He walked up to them, became angry at first but then, in old-fasioned way, quickly appreciated their chutzpah and ordered them to fly the unregistered Jodel D112 to Madrid for a demonstration. As Air Minister, had the power to do this, and that was how the factory was born and ended up building 57 aeroplanes.

Laureano became the company test pilot and he won further distinction when he landed one of its 65hp Jodels in a field close to the city of Andorra la Vella, the only pilot to ever do so successfully?a French pilot who’d tried the same trick was killed. He was later inducted into the Andorra Hall of Fame for this unique feat.

In 1955 he started display flying at airshows in Jodels and Bücker Jungmann biplanes. He also became a close friend to Constantin Cantacuzeno, the Romanian aristocrat who’d helped Franco during the Spanish Civil War. Cantacuzeno was a fighter ace and a daredevil aerobatic airshow pilot himself, flying a Bücker Jungmeister.

Later Laureano set up his own business, buying a Morane Rallye 180 for flight training and banner towing.

In fact I first met Laureano when he was 78 years old, while he was teaching banner towing to a couple of young chaps at Son Bonet, Mallorca. We flew together in my Jodel, which he taught me to loop at barely 1,000ft agl.

He became, and still is the President and instructor of the La Cierva Aeroclub in Murcia and he set up his own airfield, Los Martinez del Puerto.

This has been licensed and active for the last fifty years, with the aeroclub, several aerial works companies and quite a few private flyers operating from here. Laureano had to fight for the airfield’s survival when, in January 2019, the new Murcia airport opened only two miles away.

The authorities tried to close the smaller airfield, but old Laureano won the fight.

He is still that young minded daredevil who once, finding himself in full IMC in the tiny Autoplan biplane, followed an intercity bus from Biscarosse to Dax, flying at twenty feet above the road.

Seventy-seven years in the air make for a lot of tales. And I can tell you, he’s still happy to recount them all today.