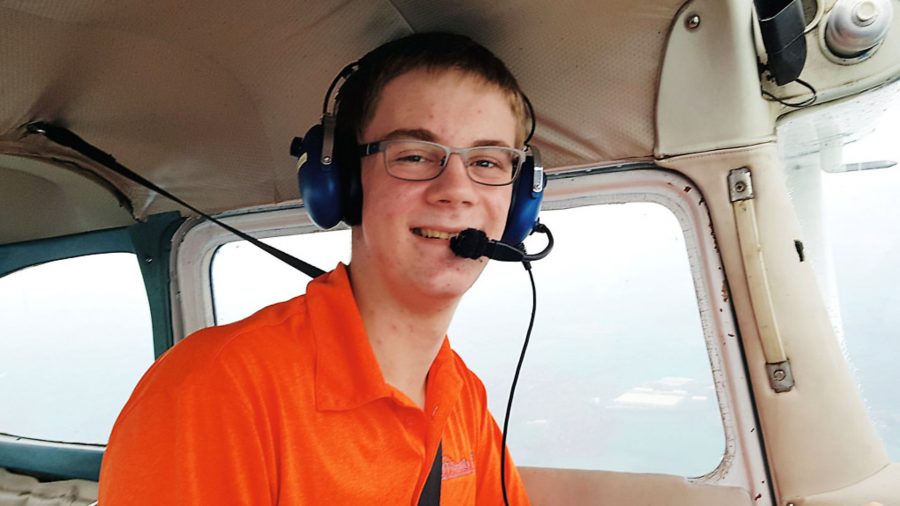 Serious illness derails a young pilot’s career ? but, with passion for flying undimned, he is determined to get his licence back | Words & photos: George Walker

In mid-July 2017 I looked out of my window at home and the weather wasn’t as good as had been forecast. The low cloudbase, rain to the east and reasonably gusty winds meant that it was not the perfect day for my planned flight to Cromer.

I texted the owner of the aircraft I fly, who rents out his Cessna 172, to cancel my trip. But I wanted to fly! I kept one eye on the weather throughout the day, hoping it would improve enough. As the afternoon turned into early evening the clouds lifted and the wind eased a little.

Perfect for some circuits to keep my skills (and currency) sharp. I drove to the airfield and the aircraft was free, so I started my pre-flight. Whilst I wouldn’t be eating fish and chips on Cromer pier, it was a great opportunity to bump around the circuit, and with a little bit of a crosswind (still well within limits) it was going to be fun.

I climbed aboard the Cessna and got that familiar feeling of nervous excitement, growing as I ran through the final checks and fired the engine into life. I did three circuits that evening, and managed to pull off three reasonable landings. Happy, I called it a day. Tying down the aircraft and driving down the dusty track from the airfield I didn’t know that would be my last flight for quite some time.

It is a cliché I know, but for as long as I can remember I have wanted to be a pilot. I used to love the flight when I went abroad as much as the actual holiday, and became interested in aviation (my parents might even say obsessed) from a young age.

I had a dream, I had a future and I was certain that it would be flying commercial jets. In one of those fortuitous coincidences that can sometimes happen in life, when I was about twelve a family friend offered to take me flying in his Diamond DA40.

I can still remember that flight: the sun low over the Wash, thinking about how the people below were sat watching television and here I was up in the air. It was only a short flight out over the Wash on a beautiful summer evening but that was it, I was sold, I knew what I was going to do – a pilot it was for me.

At that point I was still too young to fly, but a couple of years later, in the summer of 2014, I had my first proper flying lesson. Because there was lots of time before I could go solo at sixteen, I had the opportunity to have a bit of fun with my training, having some great adventures with my instructor and even persuading him to let me land the little Cessna 150 at East Midlands Airport in amongst the big jets.

I went solo shortly after my sixteenth birthday, did my qualifying cross country in the summer of 2016 (flying to Tatenhill and Gloucester in the Cessna 172), and then passed my skills test just a week or so after my seventeenth birthday. In November 2016, I was a pilot!

I took my family up as soon as I could and we had some brilliant days out. I took granddad to Wolverhampton Halfpenny Green via an overhead zone transit of Birmingham Airport both ways; had multiple visits to Duxford (sharing the circuit with Spitfires), and of course called into Sywell for one of their pilots’ breakfasts.

I really loved taking people up, introducing them to the joy of flying and showing them why I love being in the air so much. Flying is definitely better when you can share it with someone. I even managed to cure my mum’s fear of flying.

She has reasoned that if she can get in a little 172 with me and love it, then a Boeing 737 shouldn’t really be anything to worry about!

Anyway, as I drove away from the airfield that day I didn’t realise what lay ahead of me, and to be honest I am glad that I didn’t.

I’d done lots of homework on routes to becoming a commercial airline pilot and was lucky enough to secure an assessment day at my favoured flight school for admission onto their integrated ATPL training course. On the day I felt really unwell, with a blinding headache that caused me to be very ill and blurred vision in my right eye.

I held it together, not mentioning how I was feeling and remained professional throughout. It was no surprise bearing in mind how I was feeling to find out that I had narrowly failed to make the required standard on two of the many tests.

I was, however, invited back later in the year to retake those two small modules. I left disappointed but not despondent, and since I was feeling better put my symptoms down to nerves and the pressure of the day.

Although I wasn’t due to start flight school until the following summer, I decided to take my Class 1 medical; if I failed I would need to rethink my future and probably apply to university. Previously I had sailed through my Class 2 medical, surely this would just be a formality?

The doctor deemed me completely medically fit and then we came to the eye test, which didn’t go to plan. It was obvious even to me that something was amiss with my right eye. The kindly AME explained that he was worried about a slight unexpected loss of field of vision in my right eye.

He could not pass me fit for a Class 1 medical, but worse was to follow as he was obligated to remove my Class 2 medical certificate pending further investigations ? and with that one sentence he took away my freedom to fly.

I was advised to get an urgent neurological review and we left, numb, dumbfounded and drove home around a miserable M25 in the rain. What a terrible day. But, actually, having a Class 1 Medical assessment and this AME had probably just saved my life.

In late September 2017, following a couple of MRI scans, I came home from school to find my GP sat at the kitchen table with my mum and dad. From the moment I walked through the door I knew that things weren’t good; a GP doesn’t sit at your kitchen table to tell you that you have an ingrowing toenail.

He told me that I had been diagnosed with a very rare, large and aggressive benign brain tumour known as a JNA. One of the questions I asked that evening was whether he thought that flying was still an option. He said he didn’t know, but for the meantime it wasn’t looking good.

The next two months were spent in a whirlwind of hospital appointments and scans as the doctors and surgeons worked out the best course of treatment for me. On my eighteenth birthday in November I would have loved to have been able to get airborne, maybe get a flight in after school.

Instead I was lying on the operating table at Alder Hey Children’s Hospital in Liverpool for the first of three operations during that week, to try and remove the tumour that was growing in my head.

The surgery was unbelievably complicated and the wonderful team of surgeons operated on me for over thirty hours in total. In spite of a couple of touch and go moments, the surgery went well. I spent over a week in the High Dependency Unit and the surgeons managed to remove about the size of a tennis ball of tumour from my head.

I recovered well from the surgery, and three days after my last operation I was on my way home back down the M6 in the car with a couple of paracetamol for pain relief, which is amazing thinking about it now.

Some of the tumour was just too hard (and dangerous) to get out surgically and my treatment plan was for me to travel to Florida in February for six weeks of proton beam treatment to prevent the remaining tumour from re-growing.

When I returned from Florida, I rang up my instructor to ask if I could go for a flight with him. I was worried about getting behind the yoke again. After everything that I had been through, would I still be able to fly? I needn’t have worried; as soon as I took my seat in the familiar Cessna 172 and picked up the checklist I knew that I was still a pilot.

We had a smooth flight down to Sywell and I greased the landing before my instructor and I strolled across the grass for a welcome mug of coffee. On the flight home I reflected on how amazing it was to see the countryside slip under the tyres again and to be back up in the air, where all that matters is flying the aircraft.

So where am I now, in the autumn of 2018? I feel perfectly fine and have been back to normal for quite some time. The treatment has gone well and the remaining tumour is in retreat, but I will need to be monitored for a few years to come. I have tried to reapply for my Class 2 medical, but it is looking likely that I will have to wait another two years until my case will be reviewed by the CAA.

Short term, I don’t think it is likely that I will be able to achieve a Class 1 medical, and for now at least my dream of flying commercially is not going to happen. I am hopeful that in two years’ time I will be back flying again with a Class 2 medical.

I am very lucky that our friend who took me up in the Diamond for my first GA flight is kind enough to let me ride along on some of his trips, and I still love getting up in the air. Cruising around on a beautiful summer’s evening, going for lunch at the other end of the country, and just being able to talk flying with someone. There is nothing better.

I sat my A-levels last summer and I am now busy doing other things, which, to be honest, I am finding unfulfilling.

If you are a fellow pilot, you will understand how I am feeling. In spite of all the hardships and setbacks, I will always look skyward. My passion is still up there, in the air.