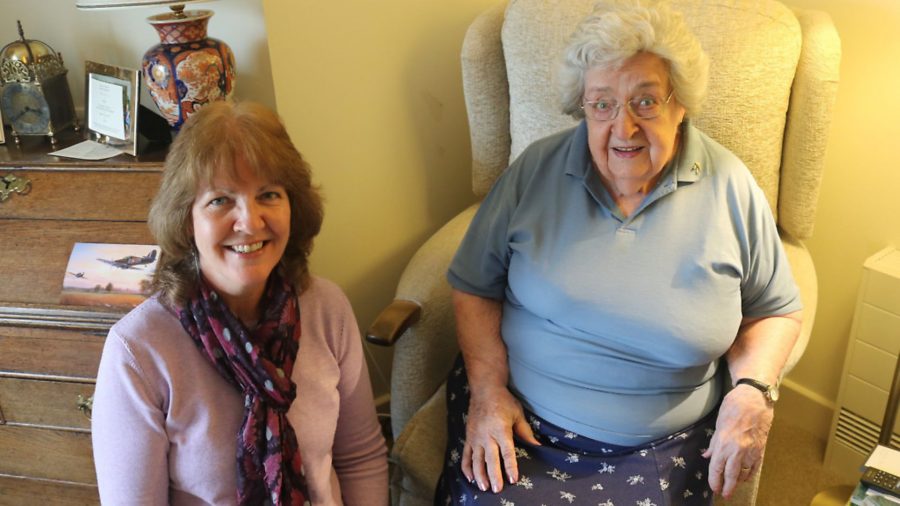 After the passing of fellow ATA Girl Mary Ellis in July 2018, many outlets reported that she was the last of the ‘Spitfire Women’. This is not the case and Howard Cook has recently had the chance to speak to Eleanor Wadsworth about her ATA days, aircraft handling and much more

It is not considered polite to mention a lady’s age unless in this case it is out of respect. Eleanor Wadsworth is 100 years of age and is probably the last of the “ATA Girls” alive although they are known more today thanks to TV and books as the “Spitfire Women”. Eleanor has outstanding recall of her time in the ATA and we were meeting regularly to chat about her ATA days – and compare aircraft handling – on a number of sunny days in July 2018.

In 1940 Eleanor was trained in Nottingham as an architect. There was a lack of building work in Nottingham so in 1941 she went to be an Architectural Assistant for the Air Transport Auxiliary at White Waltham. The ATA was a civilian organization, delivering new, repaired and damaged military aircraft between units. Eleanor experienced a flight whilst working there, going up in an Avro Anson with the Clerk of the building work taking place there.

When work was completed there was a notice on the board that the ATA needed more pilots and were looking for applicants from the ground roles. This was on a noticeboard at White Waltham. Eleanor applied and passed her medical and physical checks. She was in the first six accepted from Ground Entry.

Eleanor’s mother said: “Go ahead, they won’t let you fly them unless they trust you!”

In June 1943 she began her initial flying training at Thame. Amongst the other cadets were Canadians, Americans, and even Max Jaffe from the famous Palm Court Orchestra. The Technical course included meteorology, engines and navigation. Eleanor learned to fly mostly on Magisters, and also Tiger Moths at Barton and went solo after 12 hours in June 1943 in Magister V1017.

In August 1943 she went to Thame. This was to train on Hawker Harts and Hind Trainers, her first experience of a big engine, flying behind the 22.6 litre V12 Rolls Royce Kestrel. Eleanor recalls that they were being cannibalised to keep going.

For the ATA the “air taxi” was the key aircraft in moving personnel around, shuttling to the factories or collecting pilots from where they had dropped off the newly-delivered aircraft. From September 1943 Eleanor was operating the Argus taxi. This meant ferrying, checking weather, plotting course and making sure that the route avoided barrage balloons – not a navigation hazard we are used to these days. She always carried her Irvin seat-type parachute and overnight bag. Eleanor went for a month to Hamble but got German Measles so, following her recovery, went to Haddenham.

Eleanor recalls a particular delivery flight in December 1943 when ferrying a Fairy Swordfish. Trussed up her Irvin jacket in the open cockpit it took four days to get through very bad weather from High Ercall, Sherburn, Dumfries to Macrahinnish and got picked by a Wellington to return to base. Eleanor flew a number of Swordfish trips. One she delivered was Swordfish LS369 which was credited with sinking U-Boat ‘U674’ on 1st May 1944 whilst protecting Convoy RA59 sailing to the UK from Kola in Russia.

In February 1944 at Thame, Eleanor converted to the North American T6 Harvard – a “Class 2” aircraft. This enabled her to move up to fly and deliver fighter types. She flew her first Hurricane on March 2nd 1944 at Henlow and then delivered a number of them from the Hawker factory at Langley.

On 18 May 1944 Eleanor flew her first Spitfire – actually a Seafire 1C (NX987) – at Hamble and when chatting with Eleanor in July 2018 she recalled fondly that the Spitfire was her favourite type: “It was so perfect to handle, just lovely and flew like you would want it to”. She was flying other types as and when required so it could be Spitfire MkVb N3638 one day and Albacore N4229 another – whatever she was required to deliver.

In July 1944 Eleanor went to White Waltham for conversion on to Class III, twin-engine types like the Oxford and Anson. In August and September she was billeted in the RAF mess at Cosford and flew nine different aircraft in one month.

One day, while flying a Fairchild Argus with Joan Hughes to Methwold to pick up a crew who had dropped off a Lancaster, Eleanor took off and a piston came right through the cowling so she made a quick right on to crosswind and force landed.

From October 1944 until Sept 1945 Eleanor was based at Ratcliffe “on the Reek”. She was “close enough to be able to live at home and commute with a couple of others as it was only a short hop to Castle Bromwich to collect Spits”. At the time it was two or three trips a week as part of 6 Ferry Pool”. There were American, South African, New Zealand, Ceylon, and Dutch pilots in the ferry pool”.

In the Ferry Pool was John Cobb, World Land Speed record holder in the ‘Railton Special’. She flew 10 different types in one month including 20 Spitfires.

In April 1945 she delivered from Spitfire Mk.V AR501 from Ratcliffe to Catfoss. AR501 is based at the Shuttleworth Collection at Old Warden and recently completed a long term restoration to fly. Eleanor has the photo of 501 as she is today proudly in her logbook.

On a hot sunny day in July 2018 Eleanor recalled to me that “there were 1152 male pilots in ATA and 166 female. I was part of an exclusive wartime sisterhood, a group of courageous, individual gifted women, who in very dangerous circumstances delivered a huge range of types of aircraft to service squadrons.

“It was a fantastic organization and it was incredible that it was got together as a functioning organization in such a short time that had grown from nothing at a time when the RAF could not cope by releasing pilots to collects aircraft from the factories.

“There was no heroism, we all had a job to do and it was my good fortune to have what was a very enjoyable job. There was no harassment or prejudice, no taking advantage. I was one of the guys.” After the war in September Eleanor Fish became Eleanor Wadsworth and moved from the ATA to start a home and family and went on to work at Mann Egerton and Greene King.

Eleanor had flown 28 Hurricanes and 132 Spitfires. She also flew Defiant, Argus, Anson, Auster, Oxford, Proctor, Dominie, Martinet, Reliant, Master, Mustang, and a number of Fleet Air Arm types like the Hellcat, Swordfish, Albacore and Barracuda. She was not a fan of the Barracuda, “it did not look right, greenhouse canopy, strange wings, weird undercarriage, a real botch up’,

One of the notable enties in her logbook is the Spitfire Mk.Vc AR501 which still flies with the Shuttleworth Collection. Eleanor was delighted when I pointed out the one she ferried was still flying.

The day following our most recent get together I buzzed her apartment in the Harvard. She recognized the noise well!