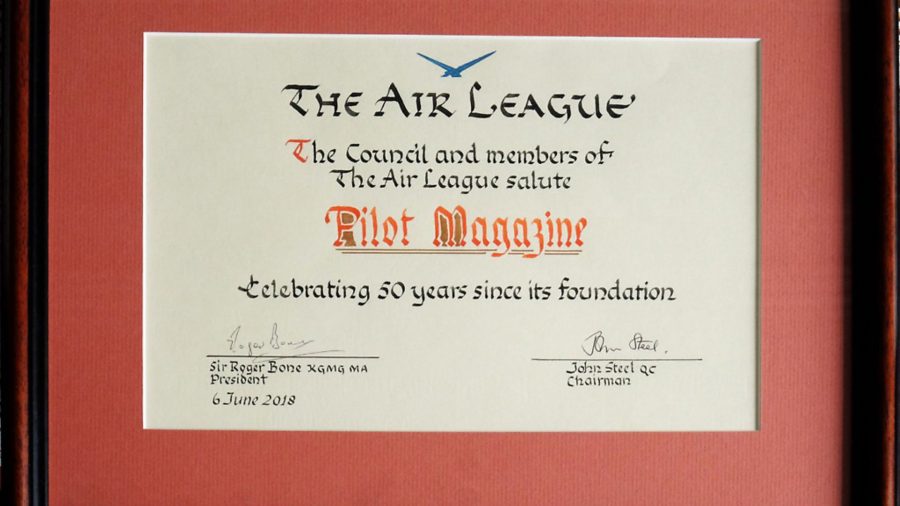 At the Air League’s Annual Reception, held at St James’s Palace on 6 June, Pilot magazine was presented with a framed address celebrating fifty years of publication

Nine years older than the RAF – which celebrates its own centenary in 2018 – the Air League exists to ‘showcase excellence in British aviation… nurture talent [and] provide opportunities for aspiring young flyers, engineers and other professionals’ – a mission we witnessed first-hand when the Pilot’s Editor interviewed young people from inner-city schools receiving flight training on gliders at the London Gliding Club.

The Air League’s patron is the Duke of Edinburgh, famous in aviation circles for his solo flight many years ago in one of the Tiger Club’s Turbulent single-seaters.

A number of prestigious awards were presented at the reception, including: The Founders Medal, awarded to the Royal Air Force in recognition its centenary; The Gold Medal for outstanding service to the causes of the Air League, awarded to Dame Carolyn McCall recognising her ‘tireless efforts’ whilst Chief Executive of easyJet in encouraging women into aviation; and The Jeffrey Quill Medal for an outstanding contribution to the development of air-mindedness in Britain’s youth, awarded to Airbus UK recognising its continuing support of Air League activities and engagement with schools, universities and young people across the spectrum of science, technology, engineering and mathematics (STEM) within the UK.

‘I was delighted to accept the framed address on behalf of not just the current editorial team and contributors, but all the previous publishers, editors – notably the late, great James Gilbert – and contributors who have made Pilot something very special and quite unique in general aviation,’ commented Editor Philip Whiteman in the July edition of Pilot magazine.