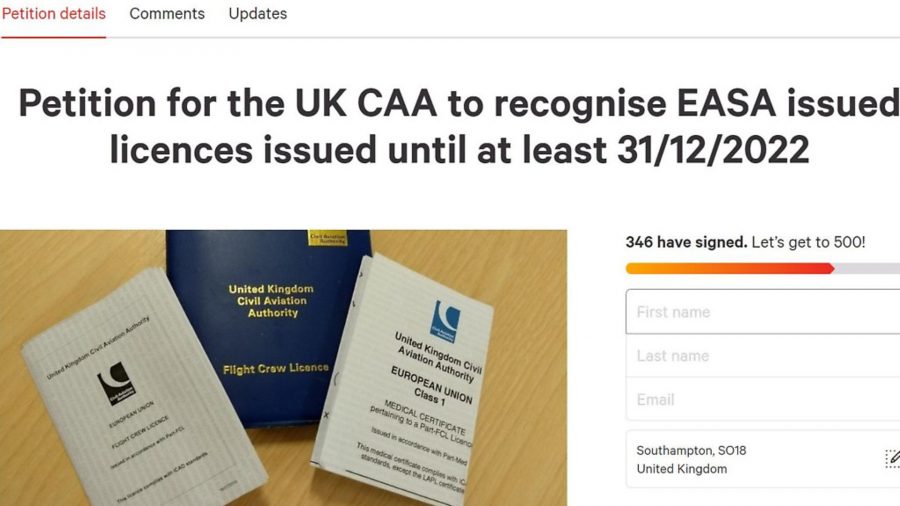 A petition launched on Change.org asks the British Authority ‘to recognise EASA licences issued until at least 31 December 2022’

A second petition to the CAA has been launched on the popular Change.org website by a group called SPACU (Student and Pilots Affected by Covid and the UK CAA). The group is asking the British Authority ‘to recognise EASA licences issued until at least 31 December 2022’.

The petition laments that the UK CAA changed its views regarding the issue, leading many student pilots to end up in a costly and convoluted licensing scenario. However, the British Authority, responding to a request for comment by Pilot, says that it has not changed its position, and that it has been trying to help and advise the SPACU group.

As late as September 2020 the CAA’s site was saying that it would ‘recognise current (and valid) EASA certificates for up to two years after the end of the transition period’ – ie 2022. SPACU says that such view expressed by the CAA ‘led many student pilots to pursue non-UK EASA licencing in place of UK licencing’. However, in a classic example of ‘the devil is in the detail’, the British Authority says that their statement meant that, for a period of two years, it ‘would recognise licences that were valid at [the end of the transition period]’. That means, for instance, that an EASA licence issued on 30 December 2022 would not be recognised.

At the moment the CAA says that ‘EASA certificates taken in 2021-2022 will no longer be recognized’, particularly with respect to ATPL exams and EASA licences. The members of SPACU are therefore now left with the burden and cost of obtaining new licences and documents by the UK CAA. The petition brought forward by the group, which had received 342 signatures at press time, can be found here