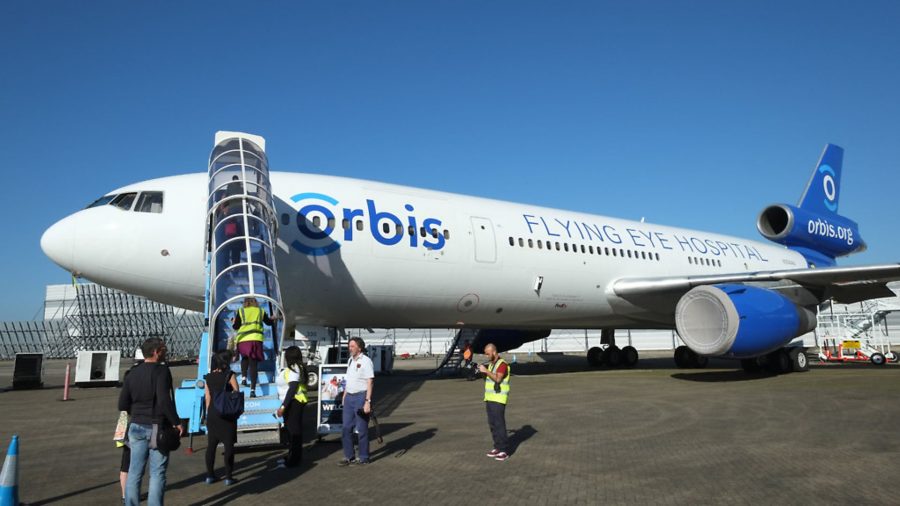 Since it first took to the skies in the form of a converted DC-8 jetliner donated by United Airlines, the Orbis Flying Eye Hospital has been making inroads to restoring sight to the world’s 285 million blind or visually impaired people

In March Orbis opened the doors of its new Flying Eye Hospital, an upgraded MD-10 donated to the charity by Fedex and flown by volunteers from the US freight carrier’s aircrew, at the Diamond Hangar, Stansted.

Orbis’s work, supported by donations from corporations and individual donors, is hugely important: it is estimated that the blindness or visual impairment suffered by eighty per cent of those 285 million could be cured or prevented with suitable treatment, often very simple and inexpensive. Crewed by 23 people, including staff ophthalmologists and volunteers including eye surgeons, the Flying Eye Hospital has logged 11.6 million eye examinations and 340,000 surgeries in over ninety countries around the world. However its activities spread far beyond simply flying in, treating patients in a fabulously well equipped eye examination suite and surgery, and departing: today, Orbis staff and volunteers work with and in local hospitals, sharing their expertise through teaching and returning after the aircraft has departed to check up on the wellbeing of patients and follow up where necessary.

Significantly, the new Flying Eye Hospital features a 46-seat classroom where student surgeons from the host country can watch operations being carried out via a 3-D video link to the onboard operating theatre. Pilot was invited to tour the aircraft, impressive, state of the art eye examination and laser surgery equipment was on display and we were allowed into the operating theatre.

From a pure aviation perspective, it was interesting to learn that both the timescale and expense involved in fitting out the new aircraft were reduced by making the examination suite, operating theatre and three-bed ward self-contained ‘cargo’ units, rather than having to certify all their supplies and systems to FAA standards. As it is, even in visiting so many countries around the world the aeroplane only logs a maximum of 150 hours a year. “At this rate,” says Chief Pilot Captain Gary Dyson “the airplane will last for eternity”.

Nevertheless, the need for funding continues. If you or your company are interested in supporting this magnificent charity, one in which aviation plays a huge part in doing lasting good, visit www.operationsight.orbis.org