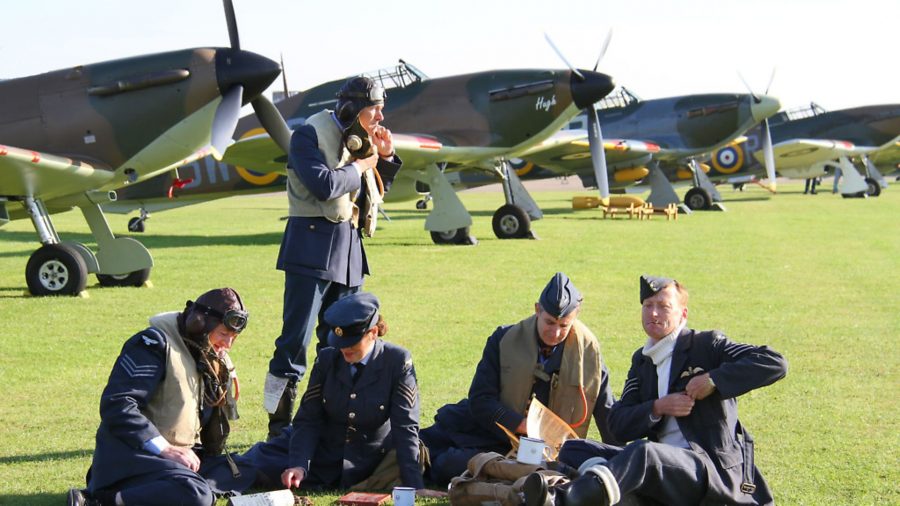 We round up where vintage aircraft have been appearing this year. Words by Peter R March with a little help from Pilot Magazine readers

In the finest tradition of the much-missed RAF Battle of Britain At Home Displays, the IWM presented a 41/2 hour cavalcade of 1930-40s warbirds on 23-24 September. The Battle of Britain Air Show at Duxford had seven Hurricanes (including a Sea Hurricane) in the air for the first time in decades — two flights of three joining together for a tail-chase — and the BBMF’s PZ865, which displayed with the Lancaster but did not land.

This reminded visitors of the key role that Hawker’s fighter played in shooting down some sixty per cent of the Luftwaffe aircraft destroyed during the Battle of Britain. Of course Supermarine’s iconic fighter was not neglected, a dozen Spitfires – including a Seafire – making a formation flypast followed by a Battle of Britain finale with three Spitfire IAs, ARC’s Blenheim, Shuttleworth’s Gladiator and five Hurricanes.

It was no surprise that B-17 Sally B took part in the flying, but being joined by two C-47 Skytrains after their spectacular take-off from the grass, was new. This formation should have included a pair of Mustangs but as they manoeuvred west of Duxford to join up, the Norwegian Spitfire Foundation’s P-51D Sharkmouth struck Boultbee’s P-51D Miss Helen, badly damaging the leading edge of its port tailplane, forcing pilot John Dodd to make an immediate downwind landing.

The NSF Mustang, with superficial damage to its propeller blades, joined the circuit and landed normally.

There was a lively Russian Front scenario with a pair of Yaks flown by Richard Grace (Yak 3M) and Will Greenwood (Yak 3UA) ‘attacking’ the airfield and driven off by Lee Proudfoot in Messerschmitt 109 ‘Red 8’ (ARC’s Buchón).

The unusual pairing of Plane Sailing’s PBY-5A Catalina with TFC’s FM-2 Wildcat was a welcome reprise of the duo first seen at Flying Legends in July.Unfortunately a gusty crosswind on Sunday and mechanical problems prevented some of the fascinating formations from taking place on both days.

The Historic Aircraft Collection’s Hawker Fury and Nimrod II and the Bristol Mercury-engined trio – Lysander, Gladiator and Blenheim – only flew on Saturday while the Curtiss P-40C Warhawk appeared without the Hawk 75 on Sunday.

However, the splendid Tiger Nine formation with eight Tiger Moths and Nigel Lemon’s distinctive straight-wing Moth Major, performed successfully in the gusty conditions, as did the ever-popular Great War Display Team. The latter’s display was enhanced by some good pyrotechnics.

Fleet Air Arm carrier action in the Pacific was highlighted by Air Leasing’s Seafire flown by Pete Kynsey paired with TFC’s FG-1D Corsair in the hands of Alan Wade making their Duxford debut together. Richard Grace was in the air again in Anglia Aircraft Restoration’s Hawker Fury ISS and should have been joined by Brian Smith in TFC’s F8F Bearcat, but the latter returned to the field on Sunday, unable to raise its undercarriage.

There was only one item in the flying programme that introduced the whine of jet engines, this coming when the Norwegian Air Force Historical Squadron’s Vampire FB52 and T55, along with its MiG-15UTI, took to the air. From the opening drop by the RAF’s Falcons parachute team to the final landing by the Spitfires and Hurricanes, it was an action-packed afternoon. www.iwm.org.uk

Desert Spitfire takes to the air

The brown (dark earth) and sand (middle stone) top surfaces and azure blue undersides, with the code QJ-3, represents No 92 Sqn’s Spitfire IX EN152, which was flown by the then Flt Lt Neville Duke in Tunisia during April-May 1943. This is the first time in more than ten years that a BBMF Spitfire has been painted in desert camouflage, Mk Vb AB910, being the last in 2003-2006. MK356 is expected back at RAF Coningsby before the end of October. For further info, see: www.memorialflightclub.com Report & photo: Adam Smith

Keeping up its reputation for British airshow ‘firsts’, the Jersey International Air Display on Thursday 14 September contained several. Foremost among them was the Swedish Air Force Historic Flight’s J 32B Lansen, SE-RMD that has only recently returned to flight on the Swedish civil register. It led the J 29F, SK 35C Draken and AJS 37 Viggen in the latest of Jersey’s well-established Saab jet formations series. Each type also gave a powerful solo demonstration, the Lansen’s being an outright first within the British Isles.

Once again, Jersey proved to be just about the most distinctive event on the year’s British calendar. Report & photos Ben Dunnell

The Vintage Aircraft Club marked the golden anniversary of the first flight of John Taylor’s Titch prototype G-ATYO (see Pilot October 2017) at Turweston during its fly-in on 23 September. Trevor Jarvis’s beautiful Titch G-AYZH was the focus of the birthday celebration and was joined by one of John Taylor’s 1957-designed Monoplanes, G-BMAO, which hopped across from Hinton-in-the-Hedges.

Both aircraft were on static display throughout the day, appropriately parked adjacent to the LAA HQ office where they received close attention from visitors.

Steve Hinton Junior’s dominance of the world’s fastest motorsport ended on the last lap of the 54th Annual Reno National Championship Air Races at Stead Field, Nevada on 17 September, 2017. Hinton was the youngest Unlimited National Air Racing champion ever when he claimed his first title in 2009.

He won seven of the eight subsequent championships, initially flying Bill ‘Tiger’ Destefani’s P-51D Mustang Strega before switching to the Voodoo, LLC P-51D Mustang Voodoo in 2013 when Destefani retired (temporarily as it turned out) Strega from competition.

After setting a new World Air Speed Record for piston-engined aircraft on 2 September, it was originally expected that the record-setting Mustang would only show up at Reno for static display. Nevertheless, Voodoo did wind up competing, although the dominant competitor this time around turned out to be ex-Navy fighter pilot James Consalvi in Strega. Consalvi won with a speed of 484.724 mph and led every Unlimited Heat Race during the week.

Hinton stayed close in second-place until the start of Sunday’s final Unlimited Gold Race when he surprised Consalvi by surging ahead and holding off his repeated challenges until the last of the race’s eight laps. Having lapped the rest of the field (four Sea Furies and a Yak-3M), both Mustangs encountered the last two competitors for a second time on the final lap.

In the process of lapping one of them again, Consalvi managed to get a slight edge on Hinton and keep him at bay to the finish line. Consalvi averaged 481.34 mph on his way to victory, while Hinton averaged 480.744 mph in his effort. The two’s overall times were 7:49:774 and 7:50:356, respectively.

This was probably the most competitive Unlimited Gold Race at Reno in decades and, for Voodoo, a racing swansong but certainly not the end of its flying days: further world speed record attempts are in prospect. Other Reno winners included Rick Vandam whose L-39 American Spirit topped the Gold Jet class and John Lohmar, pilot of the fastest T-6.

Two of The Vintage Aviator Limited’s UK-based fleet have been ‘recalled’ to New Zealand. BE2e A2767 (G-CJZP) and Sopwith Snipe F2367 (G-CKBB) have left the Stow Maries based WW1 Aviation Heritage Trust’s collection. With that pair gone, several other types are hopefully taking their places in 2018.

Plans exist to bring WW1 AHT trustee Oliver Wulff’s Albatros DVa and SE5a to Stow Maries, along with a Fokker DVII. They will join Wulff’s BE2e A2943 (G-CJZO) and other resident WW1 replicas to provide a larger fleet operating from the Essex airfield to mark the 100th anniversary of the Great War’s end and the formation of the RAF.

The latter, once finished, will be hired out for private functions and educational tours. The funds will also be used to create two full-time posts and to train volunteers.

A commemorative event on 16 September marked Lee-on-Solent airfield’s 100th anniversary. The South Coast site was first used by the Royal Navy for seaplane training, in 1917. In May 1939, it became HMS Daedalus and, during WWII, was home to numerous front-line squadrons.

Formed on 20 March 1940 as a Communications Unit, No 781 Naval Air Squadron remained there until it was disbanded on 31 March 1981. Deploying 435 units – the largest number by far of any UK airfield – Daedalus played an enormous part in the D-Day operations of June 1944.

Post-war, Lee became the main base for ground instructional and maintenance training on Fleet Air Arm aircraft. When the Navy left in the mid-’90s, Hampshire Constabulary became the airfield operator. Proposals to turn Daedalus into a housing estate were thwarted when pairs of maintenance companies and flying schools moved in and the aircraft residents grew in number. The executive leader of Fareham Borough Council supported the continued use of the airfield and so it survives today, with a new infrastructure and additional hangars currently under construction.

There was no flying display as such, but the resident HM Coast Guard gave two rescue demonstrations, showcasing its newly-delivered Agusta-Westland AW189, G-MCGO. This was a fitting Daedalus centenary tribute. A full air display, honouring the airfield’s D-Day role, is planned for 2019.

Recovered from Austria’s Traunsee lake on 13 June 2005, P-47D Thunderbolt Dottie Mae was the last USAAF aircraft lost in action during WWII. Manufactured at Evansville, Indiana in the summer of 1944 with serial 42-29150, the P-47 went into action with the 511th Fighter Squadron, 405th Fighter Group, 9th Air Force on 16 December 1944, and flew ninety combat missions before winding up in the Traunsee on 8 May 1945 – the very last day of the war.

Named Dottie Mae by its regularly-assigned pilot, Lieutenant Larry A Kuhl, the Thunderbolt was being flown by Lieutenant Henry Mohr on a morale-boosting flyover of the nearby PoW/concentration camp at Ebensee. The over-enthusiastic Mohr got so low that the Thunderbolt’s propeller blades clipped the water and the fighter wound up in the lake.

Two Austrian girls saw the impact, commandeered a rowing boat and rescued Mohr. However, the Thunderbolt remained at the bottom of the lake until Brian Kenney and the Austrian firm Sandy Air Corps finally raised it to the surface in April 2005.

Shipped to Chino, California, the aircraft was sold to former B-17 navigator Jack Croul’s Allied Fighters organisation and entrusted to Mike Breshear’s Vintage Airframes shop at Caldwell, Idaho for restoration to flying condition. A dozen years later, Dottie Mae finally took to the air on 22 June 2017 at Caldwell with Planes of Fame Air Museum VP John Maloney at the controls. After a very thorough flight test programme, Maloney flew Dottie Mae back to Chino.

Shaw sustained only minor injuries but the Camel received substantial damage. ‘With perfect conditions late yesterday afternoon, we prepared for the flight’, he wrote on Facebook the following day.

‘Everything went well at the start with good pressure, good revs, good control movements and a speedy take off. Unfortunately, it did not end so well after low-altitude engine failure. I am OK but the Camel less so. Oh well, more work!’ Shaw’s second Camel project, F-AZZB, now awaits completion.

Jeff Rushen, the senior piston engine rebuilder at Weald Aviation Services, has sent us a correction to the report in November’s Old Timers about Naval Aviation’s Sea Fury VX281’s engine restoration. ‘The Bristol Centaurus XVIII serial number C87432 fitted in the Sea Fury was categorically not completely overhauled in America. I did it myself, here, in house, at Weald Aviation.

From a core and parts obtained by the Fly Navy Heritage Trust (FNHT) from America, a full strip and re-build was done with no compromises, using original Bristol manuals and specs. We also built the propeller from parts obtained on behalf of the FNHT, our customer.’ We apologise to Jeff for missing out the true facts about the engine and propeller restoration in our report.