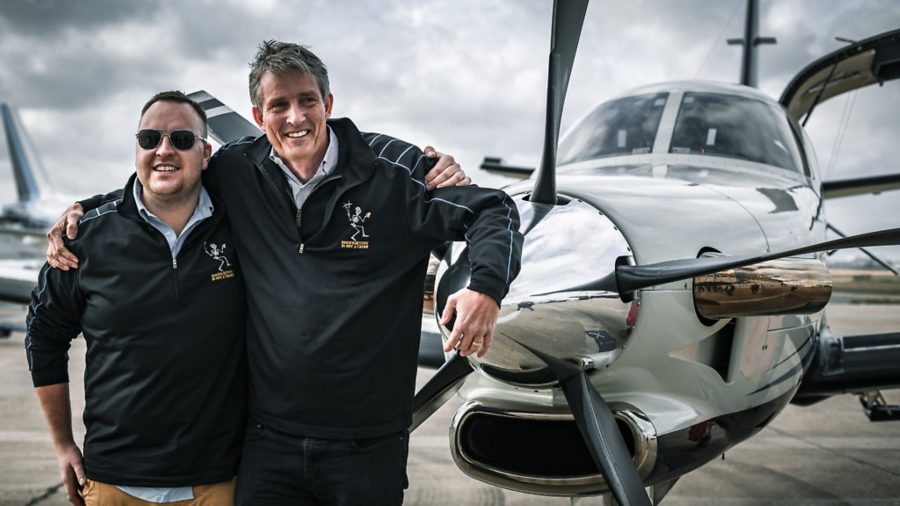 Flying the TBM 930 owned by Reuter, they crossed the Atlantic Ocean in 8 hours and 38 minutes with an average speed of 364 kts., taking off from Westchester County Airport (KHPN) north of New York City, and landing at the historic Le Bourget Airport (LFPB) near Paris – where Charles Lindbergh landed after his pioneering transoceanic crossing.

The TBM 930 beat the previous 325.2-knot record in the C1e category (turboprop aircraft with a maximum takeoff weight under 13,200 lbs./6,000 kg. as established by the Fédération Aéronautique Internationale), which was held since 1985 by the renowned test pilot, Chuck Yeager, on a twin-engine airplane.

“You are true trailblazers,” stated Daher CEO Didier Kayat, who greeted them at the airport. “With a spirit of true pioneering aviators, combined with extensive preparations, you demonstrated our TBM aircraft’s capabilities – and beat the previous record by nearly one hour. What a performance!”

Planning for the speed record attempt took the crew one year and included such elements as weather prediction over the Atlantic, definition of a route within commercial air traffic corridors, and technical aspects.

“It was 366 days ago when we first discussed the potential of attempting an around-the-world speed record with the Daher team, which suggested that we could begin with a transatlantic speed record,” Reuter explained. “After a detailed examination, we found that the current record in the TBM aircraft category was achievable.”

The weather analysis was facilitated by the use of custom-built software created by Reuter, which provided good estimation of favorable winds. His TBM 930 was equipped with a custom-made fuel tank to carry 300 U.S. gallons of jet fuel – bringing the aircraft’s total usable fuel quantity to 600 U.S. gallons, ensuring more than 10 hours of flight time.

The additional fuel increased the TBM 930’s 7,398-lb. maximum certified takeoff weight to 9,200 lbs., which required an approval from the U.S. Federal Aviation Administration. The FAA’s authorization was issued just a few days before the flight, which took off from Westchester County Airport at midnight on March 8.

“After encountering moderate winds during the first part of the trip, we experienced very favorable winds later, which propelled us at astonishing ground speeds up to 458 knots,” explained Bozek.

They landed at Le Bourget Airport 2:38 p.m. on March 9, having consumed a total of 520 U.S. gallons – near to the previsions – with sufficient fuel remaining to reach an alternate airport if needed.

Reuter, 58, is a Chicago-based global finance expert and currently flies his TBM 930 after owning a TBM 850 version for nearly 10 years. He has amassed 4,500 flight hours, half of which have been logged while operating his two TBM aircraft throughout the world – including an exciting trip to Antarctica in December.

31-year-old Bozek is a Michigan-based serial entrepreneur and real estate investor who has the distinction of being the youngest owner of a Daher TBM very fast turboprop aircraft. Bozek has flown nearly 3,400 hours (including 800 in his TBM 900) and is a passionate aviator that frequently flies aerobatics and formation demonstrations using his own collection of piston-engine and turbine-powered warbirds.

Nicolas Chabbert, the Senior Vice President of Daher’s Airplane Business Unit, saluted Reuter and Bozek for their achievement. “These two pilots have joined others in making aviation history, and we are pleased they demonstrated the real capabilities of our very fast turboprop aircraft in setting this new record.”