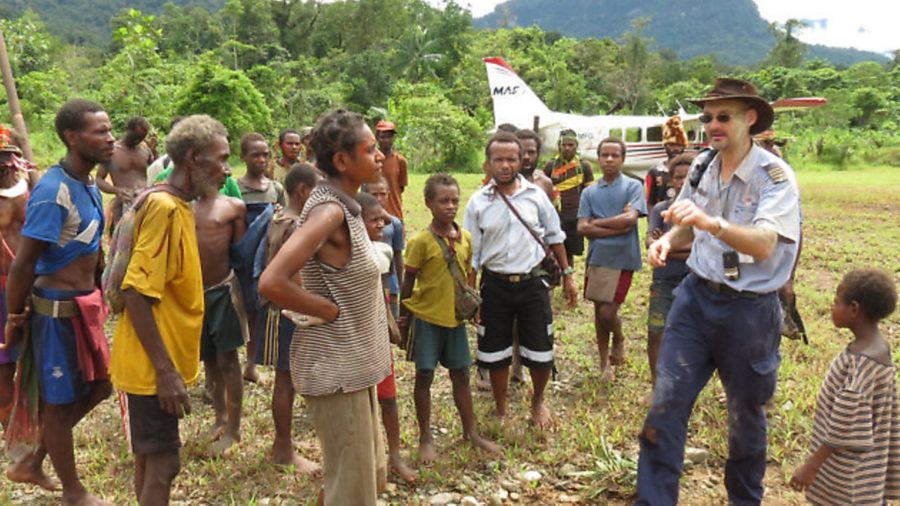 How would I land here? It’s a question that Mission Aviation Fellowship’s bush pilots ask themselves on a regular basis! Reaching some of the most isolated areas across the world is a challenge not just for the pilot but for the whole team behind flight operations.

How to land in Kaiam, Papua New Guinea

Mathias Glass and Sebastian Kurz, pilots in Mission Aviation Fellowship’s Papua New Guinea (PNG) programme, describe the day they landed at a new rural airstrip in Kaiam, Papua New Guinea. The nearest airstrip was an exhausting two days’ walk away across inhospitable terrain, putting the entire community at great risk in medical emergencies. The airstrip at Kaiam had taken 15 years of toil from every member of the small community and the Lutz family, including rural airstrip developer Anton Lutz, whose late father had marked out the airstrip’s centre line in 2000. Not surprisingly, the villagers were absolutely elated to see MAF’s Gippsland GA8 Airvan land on the new strip at last. Watch the video to see how the first landing worked out! While landing at Kaiam, Mathias’s main focus was to do a safe approach and landing at an airstrip that has never been used before. ‘I had to think of establishing a safe circuit, which was not easy because of the close terrain,’ he explained. ‘The first approach was too close and too high and therefore I had to conduct a go-around. Everything was done with estimation because there were not many figures available. For example, I had to estimate the distance and altitude of the airstrip.’

‘On normal airstrip operations I have the help of the GPS, but not this time at Kaiam. I knew the rough elevation of the strip from Anton’s explanations and some pictures he showed me before our departure at Mt Hagen. For the second approach, I flew a left hand circuit. I was surprised by the short base leg, but had adjusted the height with a higher than normal descent rate. The subsequent landing was satisfactory.’ Sebastian reflected, ‘When we approached the strip, Mathias circled and thought about the airstrip vicinity and the surrounding terrain. He flew a right and a left circuit and chose between them afterwards. He told the people straight away that they need to cut down a tree and lots of bushes in the very short final approach of the runway. He made it clear that he had to shorten the runway by 160m because of the obscured final approach.’

Sebastian had the advantage that day of completing a first landing by observation, watching all the preparation done by an experienced pilot. That also included learning how to complete an airstrip survey to gather essential information so that other pilots have the necessary data available to fly into Kaiam. Sebastian observed that Mathias was very conscientious and planned the survey very thoroughly. He took a few hours to do it and he made time to speak with the people without any time pressure. There’s a reason MAF’s pilots in PNG need a minimum 500 hours experience to fly in the programme!

Although there’s an innate thrill with bush flying, a focus on safety is of understandably crucial for continued successful operations. As aviation has grown up, and as MAF celebrates 70 years of operation in 2015, a notable legacy is the conscious safety culture. Although safety is a team effort across ground ops staff, pilots, managers and planners across the MAF world, one of the main men behind MAF’s embedded safety culture is Larry Heintz. Originally from Canada, Larry joined MAF as a pilot and maintenance engineer in 1989 before moving into safety management across the programmes. Over that time the accident rate has remained at zero in the Africa region for the last eight years. Larry recently received an award from the UN World Food Programme (UNWFP) for his exceptional contribution to the international humanitarian community.

He said: ‘There was huge respect for MAF at the Geneva event, and this is an award for MAF. It is great to be recognised for the work that has gone into our system, but it is not just me. It would not happen without the programme staff buying into it and working so hard to make it a success.’

MAF is currently recruiting experienced pilots, engineers and managers to work in programmes across a range of challenging environments including PNG. Get in touch with Fran Hawley on pr@maf-uk.org for the very latest vacancy information tailored to your interests and experience.

Get general job alerts from MAF