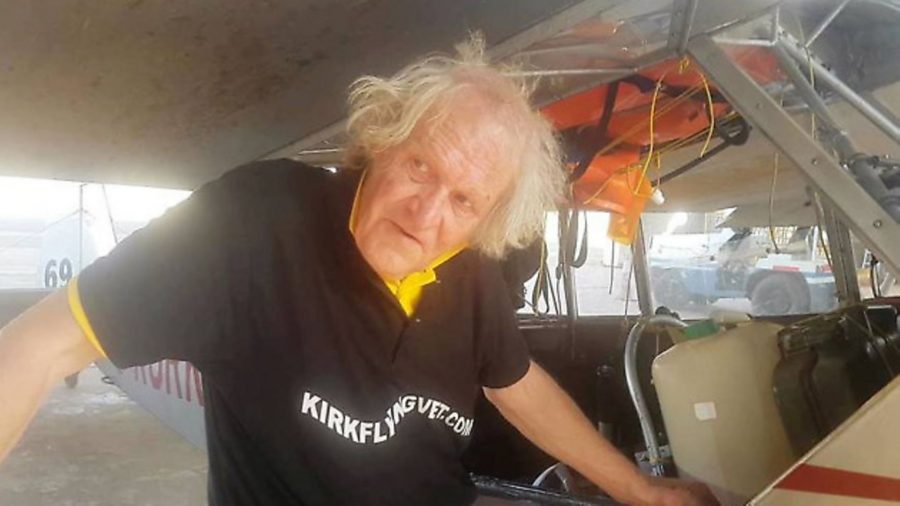 All crews taking part in the 8,000-mile voyage from Crete to Cape Town are being kept by authorities at an Ethiopian airport

British pilot, and no stranger to scandal and controversy, Maurice Kirk has turned up after being reported missing during the Vintage Air Rally (VAR).

He disappeared between Sudan and Ethiopia during a three-hour leg of the flight across Africa, causing a search and rescue operation to be launched.

Hopes of continuing with the 35-day rally from Crete to South Africa, covering some 8,000 miles, are now at risk as authorities in Ethiopia have decided to ‘allocate accommodation at the airport’ in Gambela for all the crews, around 40 people in all.

‘The reasons for this, at this time, are not 100% clear,’ read a statement on the VAR Facebook page. ‘There is no possibility to communicate with them but all participants, including Maurice Kirk, are safe and accounted for.’

‘The UK Foreign and Commonwealth office (FCO) is aware, is talking with other embassies and is negotiating on their behalf.’

There are reports that phones and computers have been confiscated.

Kirk’s involvement in the VAR caused concerns even before he went missing. He joined late flying a 1943 Piper Cub, despite the rally being intended for aircraft built in the 1920s and 30s.

The 71-year-old then suffered a heavy landing in Khartoum, which left him shaken, and had two engine failures. Organisers asked him to withdraw as his Cub did not have satellite tracking or a working compass, but he continued to fly south.

There was no way to contact him when he went missing on his way to Gambela as he had no radio.

This is nothing out of the ordinary for Kirk, former drinking buddy of actor Oliver Reed. After a string of court cases, the ‘Flying Vet’ was kicked out of the Royal College of Veterinary Surgeons for ‘disgraceful conduct’.

Then in 2008, he was arrested for landing a replica of a World War I biplane near to the Texan Ranch belonging to George W Bush. He wanted to thank the US President for being rescued by the Coastguard when his aircraft crashed in the Atlantic.

The crews have been released from detention in Ethiopia and are allowed to continue the flight. On the leg to Kenya, Kirk was, again, a ‘no show’.