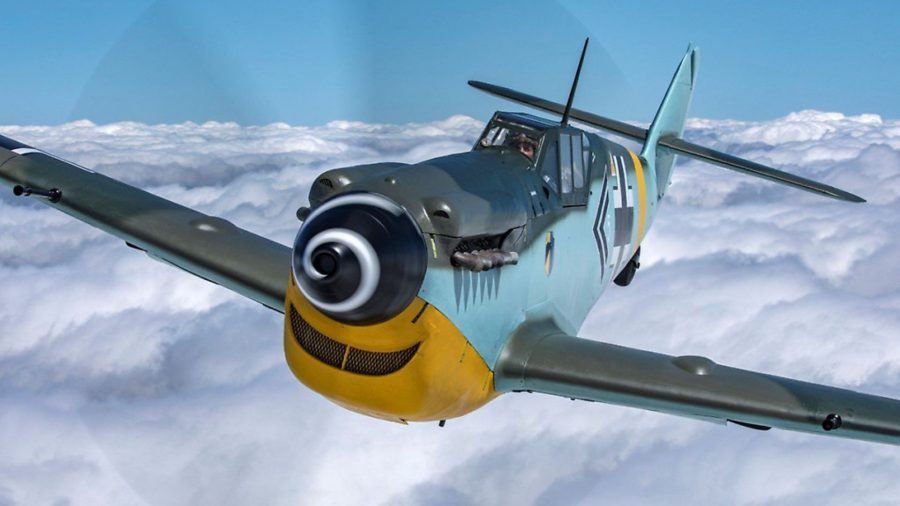 No fewer than five of the rare Buchon aircraft which played the enemy Messerschmitt 109 fighters during filming will together take to the skies over IWM Duxford.

It is thought to be the first time such a large formation of Buchons – Messerschmitt 109 airframes equipped with Rolls-Royce Merlin engines – has flown in formation since the filming. They were used by the Spanish air force up to 1965.

Among those present will be the last single-seat fighter to have been flown by the famous Luftwaffe ace Adolf Galland, who was a technical adviser to the movie. He is said to have taken the Buchon aloft without permission during filming of the Battle of Britain in Spain, having been checked out in the two-seat machine, which will also form part of the Flying Legends display.

Pilot and engineer Richard Grace from Air Leasing Ltd, said: “The Buchon is an incredible aircraft to fly, all the more so when you consider the people that flew these aircraft during the making of the Battle of Britain, which for any vintage aviation enthusiast will always rank among their favourite movies.

“I have been fortunate enough to fly several different types of warbirds, but these are very special. After filming ceased the famous American aviator and movie pilot Connie Edwards took the Buchons as payment and shipped them back to Texas where they languished gathering dust in his hangar for decades.

“We rescued some and have restored them to airworthy status. This will be the first time the public has seen five fly together since the Battle of Britain film wrapped in 1968.”

Other acts to feature at this year’s air show include the world-famous Royal Air Force Aerobatic Team – the Red Arrows – who will make a spectacular return to Flying Legends, providing one of the few opportunities to see their dynamic aerobatics before they head on a tour of the United States.

A firm favourite with the crowds, the team’s display on Saturday 13th July will be the only chance to see them at historic Duxford this year. The Reds will perform their high-energy routines before tens of thousands of people – and for the first time at Flying Legends, kids under 16 go free!

Car parking charges at IWM Duxford have also been waived, meaning all visitors can park for free. Widely regarded as one of the world’s greatest air shows, Flying Legends will feature historic aircraft in choreographed set piece displays, from iconic Spitfires to Duxford-based favourites such as B-17 ‘SallyB’ and a host of exotic visiting warbirds.

The show will also mark the 75th anniversary of D-Day when the Allies stormed Normandy to free Europe from Nazi tyranny. Another show debut will be a recently

On the ground, visitors will discover a vast range of entertainment to suit any tastes. Vintage musical entertainment will be provided by the likes of Tom Carradine, Harry and Edna and the Hotsie Totsies.

You can even try out a real Spitfire for size, take a step back in time by watching military re-enactors, visit the Home Front Bus, spot ‘Laurel and Hardy’ or even have your hair and make-up done in period style in the Vintage Village.