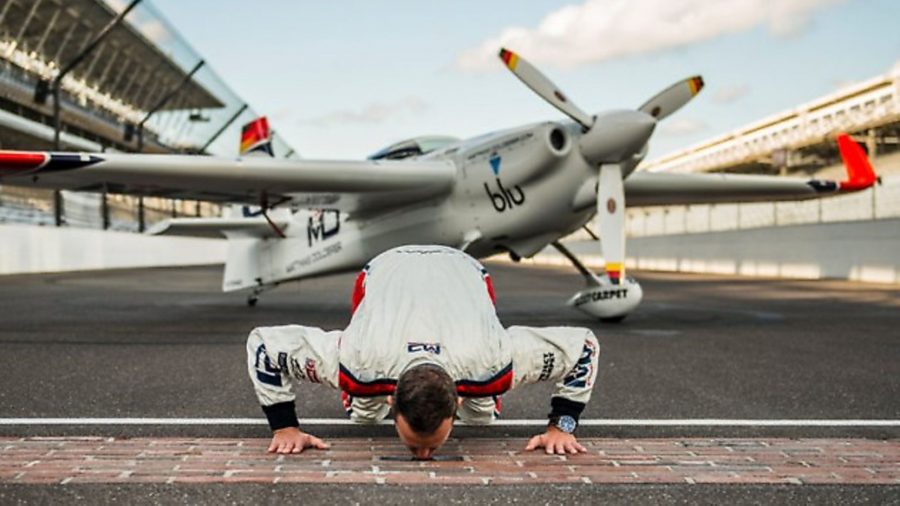 The German claimed his first World Championship with a race to spare, thanks to an unwavering performance in the Red Bull Air Race debut at Indianapolis Motor Speedway

More than 62,000 people watched the action from the stands, making a strong case for the return of the Red Bull Air Race to the legendary ‘Brickyard’ next year.

Dolderer had gone to Indianapolis with a 16.5 point advantage over nearest rival Matt Hall, but the Australian was mounting a strong comeback, having won the previous two races at Ascot and Lausitz.

Both made it to the Final 4 comfortably, where they were joined by Brit Nigel Lamb (who will be retiring at the end of the series) and Pete McLeod of Canada.

It had been a disappointing day for the American pilots, who hoped to impress in front of a home crowd. Michael Goulian lost his heat – even though his opponent picked up a two-second penalty – while previous champion Kirby Chambliss was disqualified for overworking his engine beyond the 2950rpm limit.

Hall also ended the weekend feeling frustrated. Any hopes for a third consecutive victory were dashed moments into his final flight when he clipped a pylon at Gate 2, incurring a three-second penalty.

With Hall out of contention, a clean time would have been enough for Dolderer to claim the championship.

But he won it in style, demonstrating that same ruthless consistency he has shown throughout the series. His time of 1:03.335 smashed second-place Lamb’s time by almost a second. McLeod made the podium in third.

It is Dolderer’s first Red Bull title, as well as Germany’s. “There’s so many emotions, it’s really hard to keep them under control. It’s a dream come true, and we worked really hard for it,” said the 46-year-old.

“Thanks to my family, the fans, everyone here in Indianapolis and my team – I have the best team in the world.”

The final round starts on 15 October in Las Vegas.