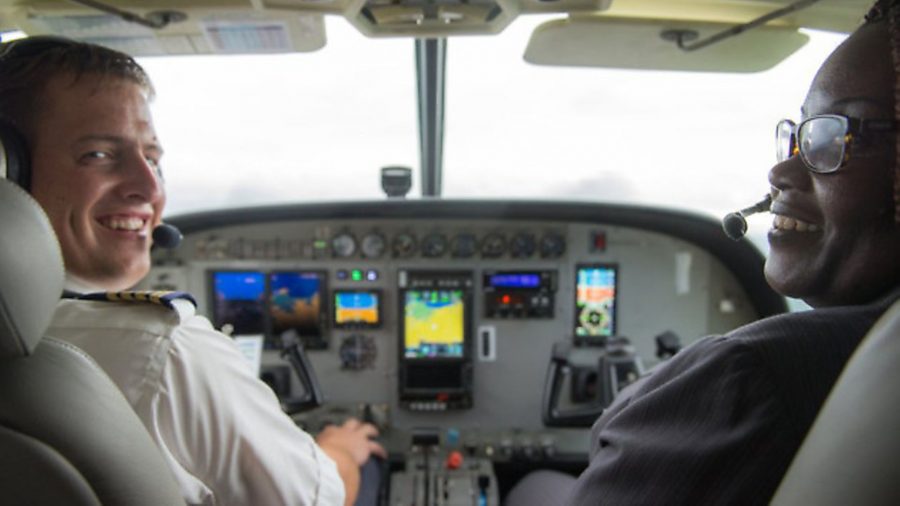 Thanks to ongoing collaboration between NGOs and aviation authorities in Liberia, MAF launched operations at last just a few months ago. For four years MAF had carefully planned operations, only to be scuppered by Liberia’s dark Ebola crisis which claimed over 4,800 lives.

Government offices were shut and all flight operation permissions were shelved as fear spread across the country.

But, on the former site of Liberia’s largest relief hospital for Ebola patients now stands the new MAF compound.It’s a testament to the next chapter of hope for Liberia after Ebola.

MAF’s plan before Ebola struck was to serve Liberia’s remotest and poorest people through aviation.

Now it’s also to help Liberia get back on its feet with dignity, for however long it takes.

The 30 year MAF veterans stepping up in Liberia

It’s 11pm in the Kündigs’ house, the evening after the official programme launch. Emil and Margrit Kündig sit at their dining table hunched over a laptop, working on the programme budget. Emil has his arm around Margrit who types in the numbers, discussing various issues. They are a team and have worked together in most of the MAF programmes.

Emil and Margrit’s 30-year history with MAF includes flying in the deserts of Chad, dangerous security incidents in Uganda, raising a family in Madagascar, the culture shock of Cambodia, flying a floatplane in Bangladesh, and now launching MAF’s programme in Liberia. In Liberia, Emil is the Country Director and one of two pilots. Margrit is the Finance Manager.

There was no doubt for Emil that Liberia would be a new and unique experience for them. “The moment you step off the airplane at Roberts International Airport, you know this is not Kenya, this is not Uganda, this is not Madagascar. This is Liberia and it is its own place, it has its own people, its own language, its own culture.

It’s exciting but it’s also challenging. You can call someone on the phone and you don’t understand what they’re saying, even though they speak English. It’s really wild. But it’s great to learn some new stuff.”

The Kündigs have vast experience of remote bush flying, but MAF needs more leaders like this with strong experience in aviation operations.

MAF began establishing operations in Liberia over four years ago because of the obvious advantage of light aircraft to serve remote people compared to vast boggy paths and few roads. Journeys can take several days by road at the best of times, and at others times the route is completely cut off. Emergency healthcare and broader development work is therefore arduous or impossible. MAF knew it could add great value to this picture, providing a much faster and safer route network for NGOs to serve the Liberian people, particularly in its remotest corners.

The catch: There are currently only ten airstrips in Liberia where a plane can safely land.

So as the only humanitarian flight operator in the entire country, rural airstrip rehabilitation is a top priority.

“We had to do a little bit of ground work,” Emil explains, describing his trip by car and helicopter to assess the strips. “People die on the way to Monrovia if they have to be evacuated to a good hospital. It’s just a start. It’s a difficult place to get to because there’s no road along the coast. It goes inland and down.”

Emil received government approval for the development of the first two strips at Gbarnga and Cestos City, allowing MAF airstrip engineer colleague Maurice Houriet to get to work on these from November 2015.

A medical clinic founder in the highly inaccessible Rivercress County area, Steve Butwill, said “One of the biggest problems in the past with Rivercess, because it’s so hard to get to, because it’s so hard to work in that area, is that so many NGOs picked places that were easier to access. When we started the clinic two and a half years ago, we were really the only people doing anything in the whole county.

I’m really excited about this new airstrip coming to Cestos City. We plan to have more doctors, nurses, and teachers coming in and staying short-term. Getting them there on a plane, versus trying to take the road, it makes a huge difference. If you have a dentist coming for two weeks, you want him out there pulling teeth, not sitting on a dirt road.”

Flying isolated healthcare workers and NGOs to help remote, impoverished communities in Liberia was our primary reason for establishing operations. People like Steve Butwill are the first signs of our dream coming true.

MAF is currently recruiting for another airstrip developer in Liberia

Even if this job’s not for you please share this article on your aero club’s page or on your Facebook wall to help us reach the right person!