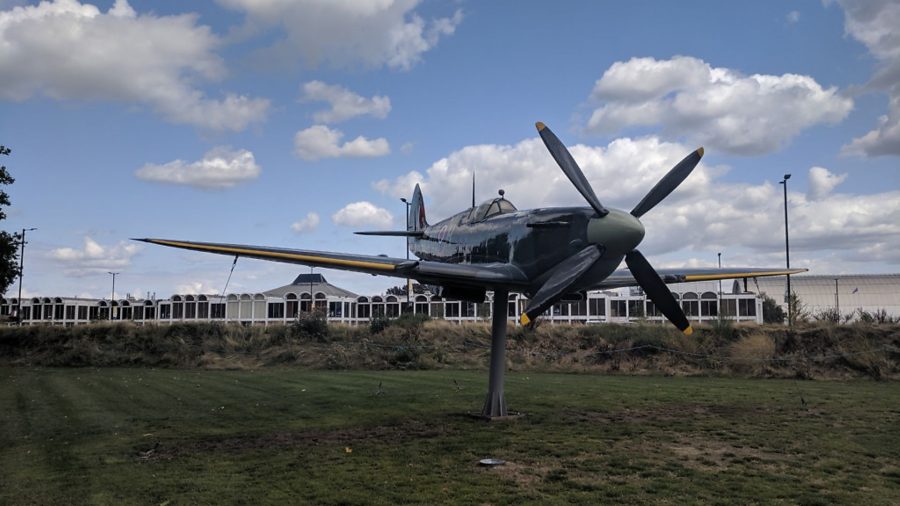 For just over a century the men and women of the RAF have played an enormous part in protecting Britain, its citizens and its interests.

Not only does the RAF Museum in Colindale – site of the former Hendon Aerodrome – honour the feats of those who have served, it also honours the magnificent aircraft that have made such vital work possible.

Located a ten-minute walk away from Colindale Station on the Northern Line and just off the M1, the museum is a must-visit for any aviation enthusiast spending a day in the capital.

On a warm day in August we paid the museum a visit to produce this brief visual guide to give you a look at the site’s numerous aircraft, exhibitions and experiences that, along with its counterpart at Cosford, make the definitive collection of RAF history.

Walking from the direction of Colindale tube station you’ll immediately notice the enormous red, white and blue text on the side of Hangar One, signalling that you have reached the Royal Air Force Museum.

Upon your entrance through the pedestrian gate you’ll be welcomed by a plinth-mounted Supermarine Spitfire to your left, a fitting beginning to a day at a museum that exceptionally captures the roles of the RAF and British aviation in general. There’s also a Spitfire by the car park entrance so if you’re arriving by road you won’t miss being welcomed by this classic aircraft.

The entrance to Hangar One is just a little further on and you’ll be straight in – for free we might add – after a brief bag check.

The first exhibition you’ll reach – of course this is optional if you wish to go straight to Hangar Six – is ‘The First 100 Years’ which opened to celebrate the RAF’s centenary in 2018. It’s an impressive start to the museum with the Westland Sea King and a Red Arrows Gnat helping to illustrate the various roles the RAF fulfils at home and abroad.

In a theme that would continue throughout the museum, larger, less detailed information boards are complemented by smaller ones explaining the origins of certain aircraft and their specific uses in operations. There are several interactive exhibits here as well as a pilot simulator in the corner.

This section moves easily into ‘First to the Future’, a futuristically-styled corridor heavy on child-friendly digital games that examine ongoing innovation within the force, including precision strikes and intelligence gathering operations.

The Lockheed Martin F-35 Lightning II gets most prominence while other examples of development in the air and in space get some attention down the flanks of the interactive experiences.

This opens out into a large foyer area containing the museum shop, one of its two cafes and a towering Short Sunderland MR5 which, oddly, you may well not notice upon entering the museum. You can go inside the Sunderland before moving onto Hangar Two.

All the aircraft you can see in Hangar One

Hangar Two: ‘The First World War in the Air’

After leaving the hubbub of Hangar One and crossing the similarly busy green area at the centre of the site you’ll be welcomed into the quiet of Hangar Two.

The first, smaller room of Hangar Two contains a Bleriot XXVII, an Avro 504K and information on the Royal Flying Corps before opening out into a much larger room filled with Great War aircraft.

As you walk through to the far end of the hangar you’ll pass a Caudron G3, Sopwith Triplane and a Sopwith Dolphin.

At the end of the hangar find the door that will take you up to the small observation platform for a very close look at the Fokker DVII, an aircraft so admired that at the end of the war it was the only aircraft singled out by the Allies to be handed over as part of the Armistice Agreement.

Look beyond the Fokker and you’ll spot a chap in a wicker basket that was formerly attached to an observation balloon. Such balloon operators would spend hours in the cold at high altitude with a parachute in case they came under attack.

Head back to the first room of Hangar Two to find the exit.

All the aircraft you can see in Hangar Two

Exiting Hangar Two you’ll pass Claude’s – a new cafe that may be a good spot to stop at the midpoint of your visit – and Hangar Six. Push on past Hangar Six if you wish to view the story of the RAF in chronological order.

As you go into Hangar Three it’ll be immediately clear that this is the most aircraft-intensive part of the whole museum, something that’ll appeal to those of you who are here for the planes rather than the human story of the RAF.

Shortly after passing the trio of a Chipmunk, Harvard and a Slingsby Cadet you’ll have a chance to have a selfie in a Spitfire, go in a 4D theatre or try the Typhoon experience. Although these may not appeal to many of you, they seem to be a handy way for this free museum to make some supplementary income.

On the way from the connected Hangars Three and Four spot the salvaged remains of a Gloster Gladiator before walking below the wings of the likes of the Supermarine Southampton, Bristol Beaufort and Supermarine Stranraer.

Cross over to the other side of the hangar to the helicopters and autogyros section housing an Avro Rota and a Bristol Sycamore among others. Just up from here are a number of jet aircraft including the Gloster Meteor and the Jet Provost.

All the aircraft you can see in Hangars Three and Four

When you passed between the helicopters and the jet planes you would no doubt have noticed the Avro Lancaster to your left tempting you into Hangar Five and now you’ll get to see this wartime icon up close alongside many of the aircraft that took part in the Battle of Britain.

Further in Hangar Five there are some Cold War era aircraft of which the Vulcan – possibly the largest aircraft in the museum’s collection – stands out. The P-51 Mustang and B-17 Flying Fortress are also shining highlights on this side of the hangar.

On the other side of the Lancaster sits a Handley Page Halifax bomber which has enjoyed quite the adventure before reaching the museum. Following an attack on Tirpitz in Norway the aircraft was hit by anti-aircraft fire, forcing its Canadian pilot to skilfully land on a frozen lake. The ensuing fire melted the ice and the aircraft fell to the lake bed until it was salvaged 31 years later.

The initial plan was to restore the Halifax to its original appearance but this proved to be impossible and it finally found its home in the Bomber Command Hall at Hendon in 1983.

The Dambusters are also paid tribute to in this section through a virtual reality experience that puts you onboard Lancaster G-George in the early hours of May 17 1943. There is a £10 charge for this experience and we’d recommend booking this in advance.

That just about wraps up everything in the biggest part of the museum but make sure you seek out the Hawker Typhoon before you depart, an aircraft thought to be the last surviving one of its type.

All the aircraft you can see in Hangar Five

Hangar Six: ‘An Age of Uncertainty’

‘An Age of Uncertainty’ is possibly the ideal description for your final port of call at the RAF Museum. From 1980 to the present day Britain’s role in overseas engagements has been under more and more scrutiny, especially as forms of conflict have changed.

The Predator remotely piloted aircraft – hanging from the ceiling of Hangar Six – perhaps epitomises the changing face of aerial conflict and likely represents its future.

The Eurofighter Typhoon and Sepecat Jaguar were both developed in partnership with other nations, another sign of how military alliances changed after WWII and also possibly an indication of plane production decline in Britain.

Compared to the previous hangars this one is relatively small so it won’t take too long to cover all the exhibits.

All the aircraft you can see in Hangar Six

That’s about it for the museum – minus a quick browse of the shop – and you’ll be off out past a Spitfire again.

Around three hours should be enough to see everything at a relaxed speed but more could be required if you’re inclined to read every single information board.

Great effort has been made to make aircraft accessible – through raised platforms or walk-in opportunities – which gives a look at the cockpit or parts of an aircraft many would never have the chance to see from ground level.

That accessibility appears to be part of the family-friendly approach consistent throughout the whole site, especially in the newer hangars. Although some may worry that this would attract hordes who may threaten the experience of studious museum goers, exhibits are spaciously laid out and so you never feel the pressure to move on from an absorbing information board. Also, our visit took place in the middle of the school holidays and it never felt excessively busy.

All in all it manages to strike a balance between being appropriate for younger audiences and providing considerable detail for the most knowledgeable of visitors. Whatever your age or interest in flying, you’ll come away with a better understanding of the role the RAF has played over the last century.

That’s precisely what a good museum with broad appeal should do as getting the younger generation interested in aviation is more important than ever.