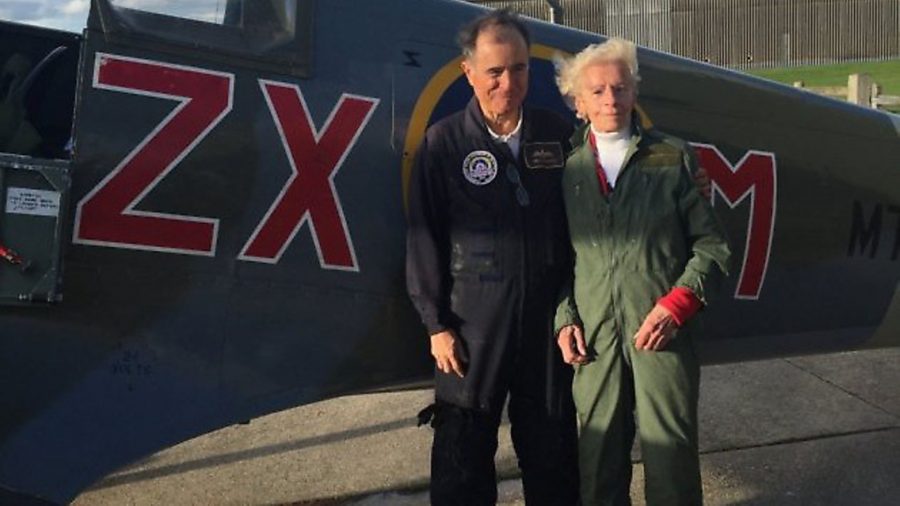 One of the first women to fly Spitfires as a member of the Air Transport Auxiliary in WWII, Mary flew some 76 types – about 1,000 aircraft – including heavy bombers. Her interest in flying was kindled at an early age and a pleasure flight as a child “sealed my fate forever”, she said.

After learning to fly, Mary joined the ATA in 1941, and was soon flying “fast and furious aeroplanes and bombers all over the country”.

At one airfield, famously, the ground crew refused to believe she was the pilot of the Wellington bomber she had just landed, and went inside to look for the ‘real’ pilot. She had several near-misses, being shot at, and surviving a Spitfire crash landing.

Pilots flew whatever aircraft needed ferrying. Mary said, “You’d get out of a Tiger Moth into a Wellington bomber and then into a Spitfire” but the Spitfire was “everybody’s favourite” aircraft.

“Being an ATA pilot was fantastic,” Mary Ellis recalled in 2016. “Up in the air on your own. And you can do whatever you like. I flew 400 Spitfires. And occasionally I would take one up and go and play with the clouds. I would like to do it all over again. There was a war on but otherwise it was absolutely wonderful.”

When the ATA was disbanded in 1945, Mary was seconded to the RAF, where she became one of the first women to fly Britain’s first jet fighter, the Gloster Meteor. She became manager of Sandown Airport on the Isle of Wight in the 1950s and 1960s, marrying her flying instructor husband Don Ellis in 1961.

Away from the airport, she indulged a love of fast cars, entering and winning sports car rallies, and ran a fashion boutique.