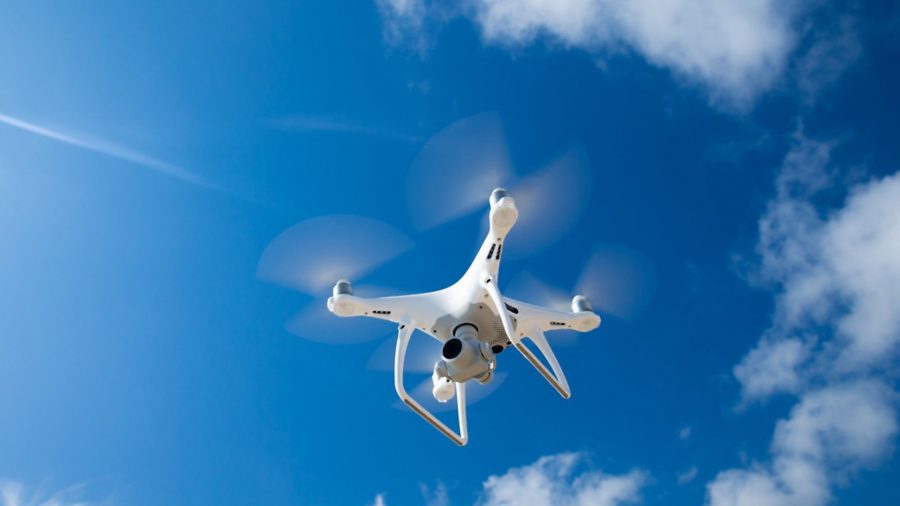 We are not making it up says one pilot, after two drone encounters led him to investigate further | By: Robin Evans

We were at 3,000ft on departure from a medium sized airport abroad in a high performance twin. I was hand-flying, so picked it up first, reflecting in the sunlight: a white, cruciform shape heading for us.

Having previously flown one, I recognized it as a ubiquitous DJI Phantom, the photographer’s affordable favourite. I called “drone” and pointed to one o’clock low.

My companion spotted it before it passed under his side, straight for the airfield. We reported to ATC and our following traffic (both pilots seemed nonchalant) and then by Airprox report.

I had seen a drone flown down a busy street in the capital of this same European country the year before; there is a cultural element that simply doesn’t seem to perceive the risk.

A second incident occurred on approach to another European field months later. My colleague tracked a drone passing beneath our starboard side, away from the field.

Again, it was a light-coloured quadcopter, confirmed by another CPL-holding passenger aboard. I was flying at the time, but happy to rely upon eyewitness testimony of experienced pilots I knew, flying with a low workload in broad daylight.

The opinion of the controller was clear: “It’s not my job, you must inform the police when you land”. The police were equally uninterested – they did not attend.

The two incidents led me to some pondering and investigation. Both encounters occurred between 2,000ft and 3,000ft, aligned with the runway axis.

I wondered; could either have been loss of control, drift out of range, mischief-or just carelessness? Also, although media reports about drones are often sensationalized, we can rule out the fiction factor here.

And the suggestion that these are just tales until we can present video evidence is unrealistic. I would love to see the footage that the drones might have taken-if they survived our wake.

There is also much suggestion that there’s minimal commercial threat, that the published research had an agenda, and that drones would likely bounce off a jet leading edge.

But what if one were to foul a main rotor, the propeller of a piston-engined single-or Rolls-Royce Trent?

Intrigued, I contacted two established drone operators. Both were highly professional, generous with their time and modified this pilot’s preconceived notions of an entirely new (and valid, in its place) strand of aviation.

One explained that Amazon would like to redesign our airspace, reserving the 200 ft to 400ft corridor for deliveries. He demonstrated a mode called active-track, which locked the drone onto a selected target: me.

I walked away and the drone followed without any control input. He then walked by in the opposite direction and the active-track leapt onto him. It’s an automation caveat lost on the public: powerful tools need monitoring.

I invited a second drone operator to attend a school aviation event. We both spoke, and demonstrated our respective trades to several hundred children.

He explained how to risk-assess sites in a similar way we choose fields for forced landings: size, slope, wind, live stock and so forth. Many PPL/CPL skills transfer well, particularly checklist discipline and situational awareness.

Some of them are non-technical: drone operators might have to manage concerned or ignorant bystanders, just as we brief anxious passengers.

I also learned the CAA typically refers complaints of drone misuse to local police. However, a colleague revealed that in an experimental call to both, each just referred back to the other.

How much freedom to allow, and how much regulation to have is an act of careful balancing. The UK’s historic soft-touch approach has often avoided strangling innovation.

Amazon, for instance, brought their autonomous testing to the Cambridgeshire ‘Silicon Fen’ because it was impossible in the USA. But there are also examples of the opposite: the UK swiftly banned e-scooters from our roads, in contrast to European countries now learning the hard way.

The register of approved drone users (CAP 1361) grew from 2,300 (2017) to 4,700 (2018) and 5,500 today. Casual users (a training provider gave the example of media students) operating on an occasional basis would be more likely to risk operating without the required permissions.

And unapproved commercial users are given a chance to join a course-if they can be traced. From the ground, I find I often hear a drone first, but depending on the environment, might not see the operator.

The CAA Drone Code permits flight within visual range (subject to a 50/150 metre limit from single/multiple receptors) meaning they could be anywhere within a significant radius.

In March 2019, the regulations around airports changed to align with the control zone, adding an additional 5 x 1km buffer along each runway axis.

However, the database doesn’t include any of my local grass strips or private sites, possibly unknown to the public.

In a way, drones seem to be the new lasers. Having experienced these too, the UK seemed to reach ‘peak laser’ around 2010. I recall the court case relating to an airliner illuminated by laser.

The guilty party was waiting in an airport car park to collect a friend on the very flight they targeted – perpetrators often seem to fail to see the connection between an aircraft and the effect of their act.

With time, our law (and behavior) adapted, and we now hear less of the misuse of lasers. I don’t find myself primed to see drones everywhere. Having met them twice, their relative motion, colour and contrast meant a good lookout caught them like birds.

The drone lobby (and public) seems suspicious of pilots restricting their activities. Both groups might be surprised to hear that some private and commercial pilots also fly models or drones (we must keep in mind that drone abusers take flights too, albeit not in the pilot’s seat).

The irony, I believe, is that because they are so easy to fly, drones short-circuit the gradual building of airmanship.

There might be an automatic desire to use the technology, but there is no such entitlement to our hard-won knowledge.

At what price the slow appreciation of dronesmanship?