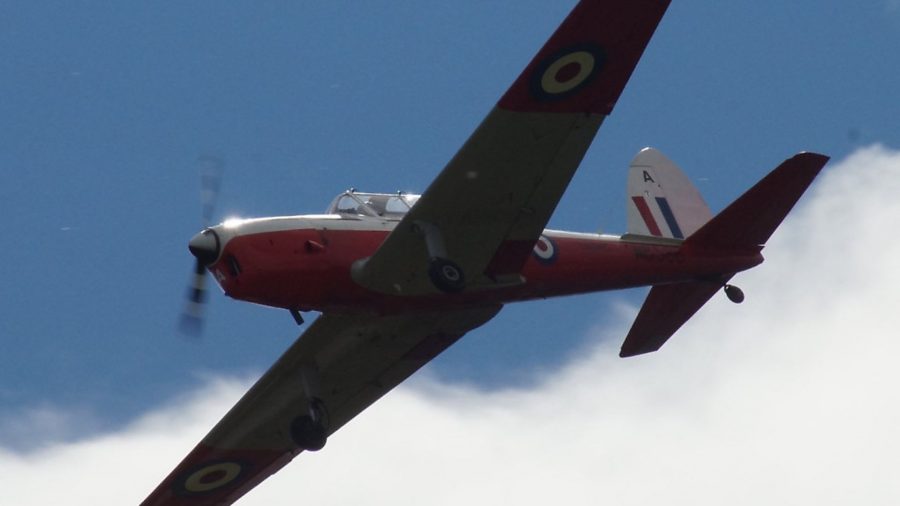 All that we see or seem/Is but a dream within a dream/I stand amid the roar/Of a surf-tormented shore. The words of Edgar Allan Poe resonate in my mind to this day | Words by Dan Vandenberg 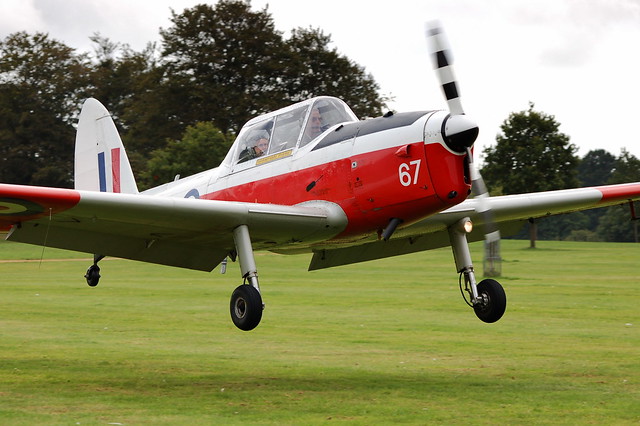 “We won’t be going down there,” I said to my passenger. Tony didn’t sound too disappointed: “Fair enough. Will it clear by the time we get to Robin Hood’s Bay?”

“There’s only one way to find out. But it doesn’t look very promising.”

The Chipmunk had settled down to a steady ninety-knot cruise at around 3,000ft. The sea fret covered the coastline like a brilliant white blanket, whereas to the west the visibility was excellent.

This was only Tony’s second trip in a light aircraft, and he’d asked for a run up the East Coast.

As I didn’t have a car at the time, he’d given me a lift to the airfield. He was a good driver?smooth and fast without feeling the need to show off. I was determined to follow his example in the air.

I let Humberside Radar know what we were up to, then pointed out Immingham Docks, the Humber Bridge and Kingston upon Hull as we progressed northwards. With the aircraft nicely in trim, I let Tony have control.

For someone who had never flown before, he was quite competent. With the odd prod from me, he kept us on a pretty good heading.

Half an hour after setting course, unmistakable evidence of the former RAF Driffield was off our left wingtip. We followed the road north, and I took back control before beginning a gradual descent towards Scarborough.

As I adjusted my heading to avoid the danger area around Fylingdales’ phased arrays, I could see a break in the sea fret… was that Robin’s Hoods Bay?

“We’ll go down and have a look”, I said. Tony was impressed by my descending turn as we swept over the Bay: “This is fantastic!”

“We made it after all” I said with a smile?a smile that lasted right up until the moment I completed my 180. 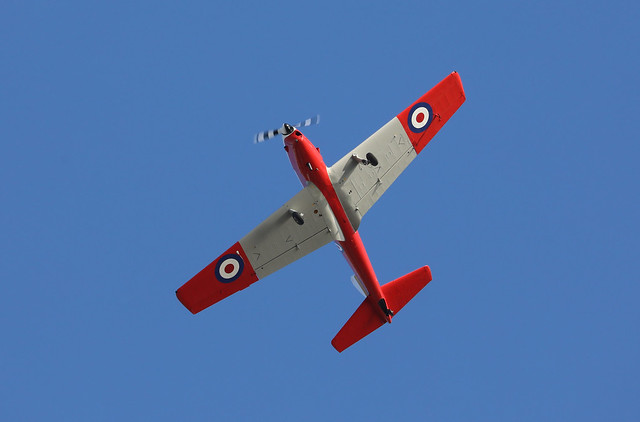 The world had turned grey. There was no horizon. What now? Fly the aircraft. I instantly dismissed the option of trying to climb, as I wasn’t instrument rated (and neither, incidentally, was the Chipmunk).

Instead I let down until we were barely fifty feet over the sea. I kept the cliffs off my right wingtip, slowed down to 65kt, and took stock.

Looking ahead, the visibility was about 500 metres. The sea was glassy grey, with a hint of turquoise for added interest.

Fly the aircraft. The cliffs became my primary attitude reference. The note of the Gipsy Major remained reassuringly constant, as did the airspeed. 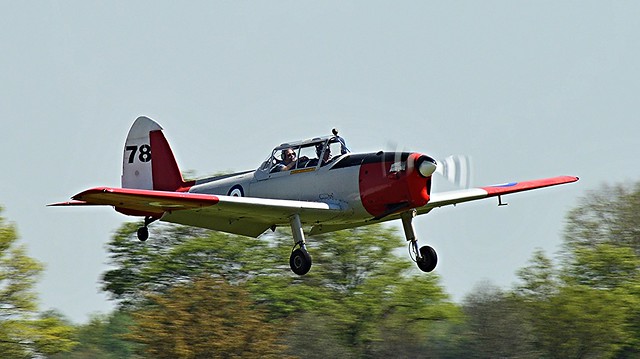 I had the aircraft?if not the situation?under control. My safety brief to Tony hadn’t included what to do in the event of ditching.

I felt the need to say something: “We’re going to follow the coast until we get to Spurn Point. There’ll be no cliffs, so we’ll be able to climb”. Tony appeared to be unflappable: “I’m actually enjoying this!”

I tried to remain calm, and carried on following Rule One. Then the cliffs were pulled away, and I could see a beach, people, buildings… Scarborough!

It was like looking at a photograph that had been over-exposed. I aimed for the headland beyond. And then it was back to the old routine… 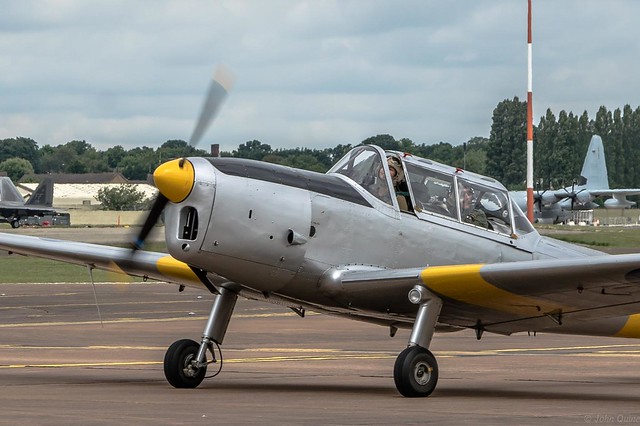 After we passed Filey, I began to think about our feathered friends. We were approaching Flamborough, and that meant Bempton Cliffs, a place packed with seabirds.

All too soon, I could see a rock shelf jutting out into the sea like a jagged front door step. No birds. They obviously had more sense than to go fishing on a day like this. What happened next is a memory caught in perpetual freeze-frame.

A black-headed gull reared up from below the right leading-edge and whipped over the canopy?but not before we’d been eyeball-to-eyeball. I swallowed. Hard.

Hundreds could now be lifting into our path. It would be like that scene in the movie Indiana Jones and the Last Crusade, when Professor Henry Jones Snr (Sean Connery) uses his umbrella as a bird scarer. 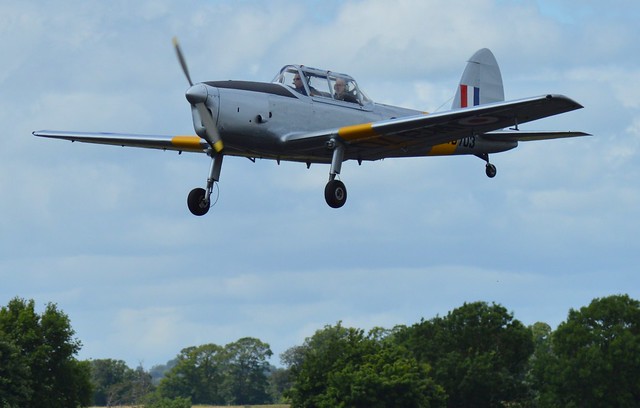 Fortunately our luck held, and we did not share the fate of the luckless enemy pilot and his Pilatus P-2.

There were no more birds. None that I could see at any rate. The tension subsided somewhat. We pressed on…

“That’s Bridlington” announced Tony, very matter-of-factly. I could see people paddling, and some of them were uncomfortably close.

Yet they didn’t seem to be paying us much attention. Perhaps the Chippie’s RAF uniform was covering my multitude of sins? 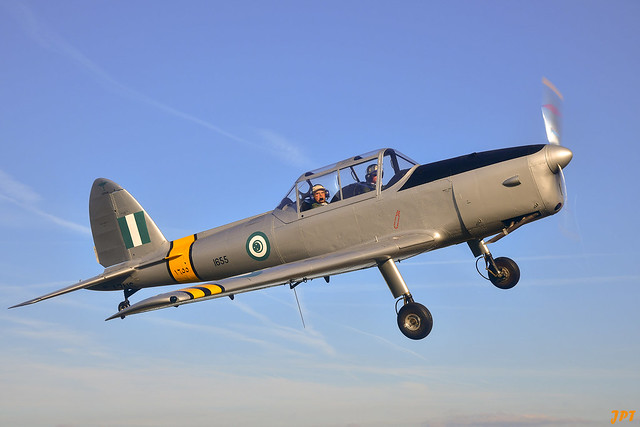 How were those holiday makers to know that even the military don’t make a habit of overflying anyone at such a ridiculously low height?

We couldn’t follow the coast forever. I was hoping against hope that by the time we saw Spurn Point there would be another gap to fly through. There wasn’t.

Having already driven the proverbial coach-and-four through Rule 5, I had managed to achieve a modicum of lateral separation from the RNLI’s Humber lifeboat station (the only one permanently manned). It was time to climb…

So I kept up the mantra, and wiggled my toes to relieve some of the tension. There were no silent prayers?I was totally focussed on the task in hand. After I don’t know how many seconds or minutes, the sky flickered like an old light bulb. Then it turned darker, then lighter again.

A heartbeat later, we broke out on top. Never had the Humber estuary looked so magnificent.

Grimsby was as beautiful as Venice. “We’re okay now,” I said. Tony must have realised what was at stake, but he was as upbeat as ever: “I never doubted you for a moment”.

Our banter was broken by a ‘Report position’ call from Humberside Radar. No bollocking, no number to call, just a ‘Report field in sight’ after I had acknowledged. Unless you count a late go-around due to a pesky crosswind, the rest of the flight ‘proceeded without incident’.

That Sunday evening, Tony and I consumed a few pints, the first being sweeter than any bitter I’ve tasted before or since. I confessed that, about a fortnight earlier, I had the most vivid dream about being trapped by fog on the East Coast.

From the moment we entered Robin Hood’s Bay, I knew exactly what to do?because I’d done it already. Had it been a dream within a dream?

The reality is that all too often a sucker’s gap is as deadly as any femme fatale. My world could so easily have turned black?and I’d have taken a trusting, thoroughly decent human being with me. Unforgivable.

We were back in the office on Monday morning. I met Tony at the coffee machine. Waiting in line was Lisa, who knew we’d planned to go flying over the weekend.

“I was in Bridlington yesterday with my boyfriend. We saw this idiot flying down the beach…” This idiot learned about flying from that.