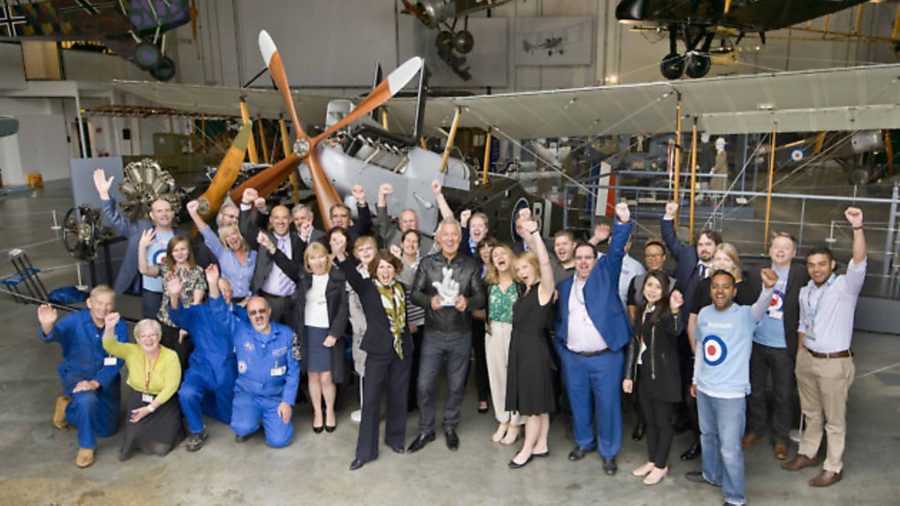 On 1 September actor and keen flyer Martin Kemp presented staff at the RAF Museum in Colindale with a National Lottery Award trophy.

Martin took time out from tour preparations to help staff at the RAF Museum celebrate its award-winning exhibition. The First World War in the Air exhibition received over 7,000 votes to be named the UK’s Best Heritage project in this year’s National Lottery Awards – the annual search to find the UK’s favourite Lottery funded projects. The museum wins a £2,000 cash prize, an iconic National Lottery Awards trophy and will attend a star-studded Awards ceremony, The National Lottery Stars, broadcast on BBC One on 21 September.

The First World War in the Air gallery brings to life the compelling stories of the people, innovations, engineering and aircraft of the Great War. Over 65,000 people have visited the exhibition in the last six months, with thousands more accessing information on the Museum’s websites.

“This is a fantastic project, not just for aviation fans like me ,” Said Martin. “ It is great that National Lottery Players have helped to preserve these wonderful flying machines for so many young families and people of all ages to appreciate.”

Karen Whitting, Director of Public Programmes , RAF Museum added “This award is special because it is voted for by the British public. We hope our success will give us even more of a national and international profile and help to attract more National Lottery Players and visitors.”