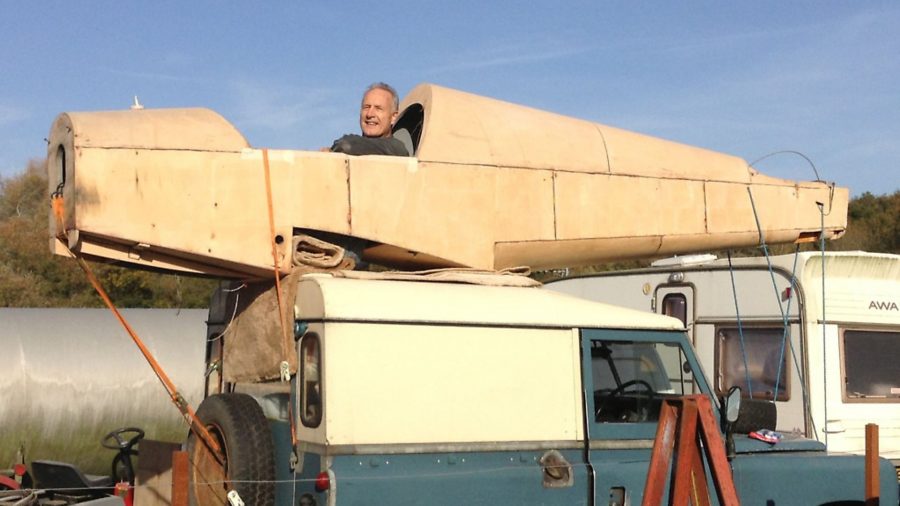 Part one of an enforced DIY rebuild project that eventually brought satisfaction and pride | Words and photos: Bob Grimstead

The good news is that, in the last five years I have gained useful practical knowledge about repairing wooden aircraft, the intricacies of fabric covering, and the complexities of my lightweight aeroplane’s structure and construction.

The bad news is that this all happened because in September 2013 a self-styled ‘aircraft engineer’ agreed to replace and re-paint the fabric covering on my wooden Fournier RF4D for a reasonable price within a month?but then didn’t.

Those of you who fly metal or composite aeroplanes may not be aware that proper wooden aircraft are usually covered with fabric as an extra layer of protection before being painted. Whether it be fine cotton, linen, fibreglass or modern polyester (but never ‘canvas’) all these fabrics have a finite life which depends more upon the flexibility of the paint than the material itself.

Over the years paint’s plasticisers evaporate, rendering it rigid and brittle, and prone to cracking and flaking. This is what had happened with my 45-year-old Fournier, and it had not been helped by some well-meaning soul having re-sprayed the original flexible dope with a more modern, harder but less supple two-pack paint.

In all its illustrious history G-AWGN (‘Wagon’) had never previously been operated by an individual. It started out as one of a fleet of Fourniers training, touring, air racing, competing and displaying with the late-lamented famous Sportair flying club and school at Biggin Hill, before going on to a syndicate at Staverton, and then to a succession of group ownerships.

Perhaps because of that, and despite being completely airworthy structurally, it had become increasingly shabby over the years. I had done what I could to improve it during my ownership by replacing its engine and propeller, incorporating a few performance-enhancing modifications, adding a snazzy sunburst scheme and patching the paintwork here and there, but it finally became due for a complete cosmetic refurbishment.

I could have done this work myself, but that would have meant learning several new and unfamiliar techniques and it would have taken me a long time?something I had little of. So I decided to use some savings and get the work done professionally. Unfortunately, after my poor aeroplane had spent months in his premises, the aforementioned ‘professional’ had barely started this work, confining himself instead to stripping the aircraft completely apart?right down to its last nut and bolt?ripping out the cockpit floor and cutting away part of the tail’s underside without mentioning to me beforehand that he was considering doing these things, let alone whether it was necessary (which it wasn’t).

This individual was no better at running a business, which eventually led to his being declared bankrupt. After some months’ delay his trustee in bankruptcy finally allowed me to collect the remnants of my aeroplane from his former workshop, so I fired up my trusty Land Rover and loaded it with padding, straps and ropes.

Peering into the workshop’s gloomy interior (the unpaid electricity had been cut off) I could just make out the bare skeletons of my wing and fuselage. Further rummaging unearthed its disconnected engine, propeller and spinner, a mangled aluminium firewall, the luckily-intact canopy, tank, instrument panel, radio, seat and belts, completely dismantled main and tail undercarriages, tailplane, elevators, fin, rudder, ailerons, cowlings and fairings, all scattered about the place, and with some components hidden in the loft.

There was also a large agricultural sack of miscellaneous metal components, Bowden cables, nuts, bolts and fittings, none of which was bagged, tagged, marked or identified in any way.

We crammed all this stuff into my wife’s car until it was full to the headliner. Then we manhandled the fuselage onto the Land Rover’s flat roof. I couldn’t resist getting a jokey photo of me sitting in the cockpit.

After a couple of hours of lifting, carrying and securing we had packed all there was to be found, except for that single-piece, forty-foot wing. How was I to transport that?

A quick phone call revealed that fellow Fournier owner Andrew had used the bankrupt engineer’s nine-metre open glider trailer to take his wing home to Nottingham and it was still there. I approached the bankrupt stock dealer and asked if it might be for sale.

He said yes and named a price. I subtracted from this the cost of driving my sixteen mpg Land Rover to and from Nottingham to retrieve it and we agreed upon a sum. I handed that over in cash and he gave me a receipt. Nowadays, considering the total cost of the whole misadventure, I call it ‘My £10,000 trailer’.

So we departed with the disassembled remains of my once-lovely Fournier, more than a full year after the start of this disastrous saga. When we got home we opened a nominally appropriate bottle of Cuvée Fournier Champagne that I had intended sharing after the re-covering. The process hadn’t even started yet, but I think I smiled properly that evening for the first time in fourteen months.

A week later I drove to Nottingham where Andrew ruefully showed us his similarly dismantled and naked Fournier. While I was prepared to take on the job of reassembling and re-covering mine, he was fed up with the whole affair and just wanted to sell his as it was. I heard much later that he was eventually able to do just that.

It was clear that I would never be able to afford to pay anybody else to inspect, repair, re-cover and reassemble my aeroplane. So I must do it myself. This eventually took many months of uncomfortable, painstaking and meticulous work in less than ideal conditions.

To my surprise, however, and despite this frustrating use of my time, I actually ended up enjoying what turned out to be satisfying work. And now of course I know and trust my little aeroplane inside-out.

I have always been happy with the comparatively basic mechanisms of a light aircraft?air-cooled engines, nuts and bolts, hoses, wires, hinges, pulleys and cables?ever since learning to maintain my mechanically similar first motorbike at the age of sixteen.

Indeed, I had accomplished all but the most specialised work on all of the seven aeroplanes I’ve owned over the years. So, apart from the time it would take, nothing about the simple reassembly concerned me.

But the fuselage repairs were another thing. We did have a weekly woodwork class at our grammar school (it was our only practical lesson) but I never excelled, and the thinnest timber we handled was at least half-an-inch thick, so the fifteen-to-one scarfed (tapered) repairs to centimetre-wide aircraft grade Douglas fir stringers and two millimetre thick Finnish birch plywood would be a challenge.

I was also worried about the covering. Until the sixties aircraft fabric was usually finely-woven cotton or linen, but more lately various proprietary brands of dacron polyesters have been used?the most common being the American Ceconite and Polyfiber or the French Diatex.

All of these are glued to the airframe with a combination of the appropriate adhesive, allied with the leaching properties of an eye-wateringly strong solvent called Methyl Ethyl Ketone (MEK) before being protected with a suitably flexible paint.

I understood the principles and was familiar with the basic techniques. Fabric work and the subsequent paint spraying are generally regarded by lay pilots as as much of an art as a skill, and not something to be undertaken by an amateur if you want a good finish.

I had used madapolam cotton fabric and butyrate dopes on my Turbulent, and made some Dacron repairs on my Champ and Maule, but I was painfully aware that the resulting finish could never be regarded as ‘professional’.

An additional problem for me as a rank amateur was the painting. I don’t own a compressor or spray gun, nor do I have a spray booth to prevent the minute excess liquid droplets from drifting around and landing on sundry inappropriate surfaces?like other folks’ pristine aeroplanes.

Yes, I could hire the equipment and make a temporary booth out of metal tube and plastic sheeting, but that would mean even more work and further expense. Also my history with aerosol paint cans suggests I would be very unlikely to get a decent finish, devoid of runs and/or orange-peel effect. So, what to do?