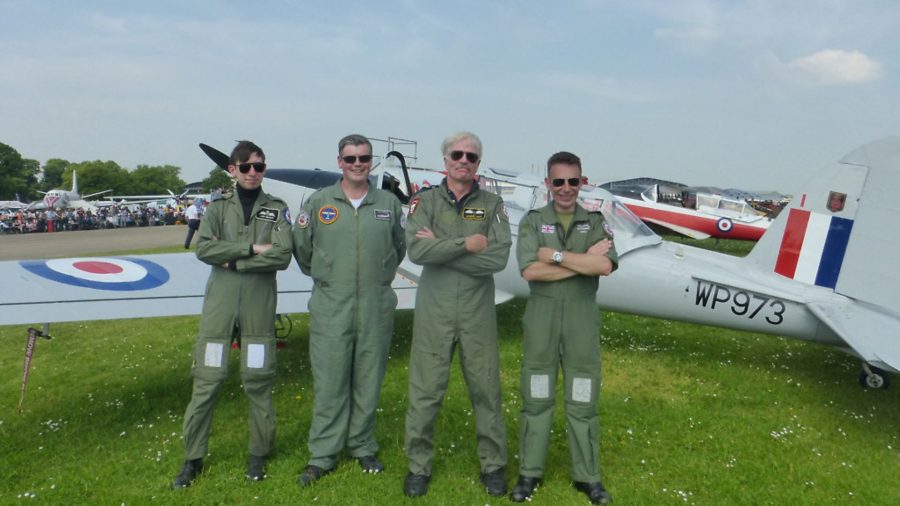 The Chipmunk is held in great affection by many, from RAF, Royal Navy and Army Air Corps pilots who trained on them, The Chipmunk is still a valuable training aeroplane in the 21st Century with teams such as the Battle of Britain Memorial Flight, Aircraft Restoration Company and Historic Aircraft Collection using it for pilot training for a range of World War II fighters including the Spitfire and Hurricane.

Unlike many aircraft in air displays the Chipmunk is one that many in the display audience will have flown in; such as the many of Air Cadets who had their first flying experience in one, silver helmet on and Irvin seat parachute banging against their legs on the way out to the aeroplane for their first flight.

Howard had trained David Petters and Paul Green at Duxford and they were joined by Jon Higgins with whom Howard has flown displays a number of times. David, Paul and Jon had not flown in a display at Duxford, something Howard has done regularly over the years and therefore he decided to form the ‘Four Chip Formation Team’ based on the teams name and basic four ship formation, to enable them to make their debut.

“We had a very successful first team show at Duxford and as a result we are now looking forward to flying some shows in 2019”.