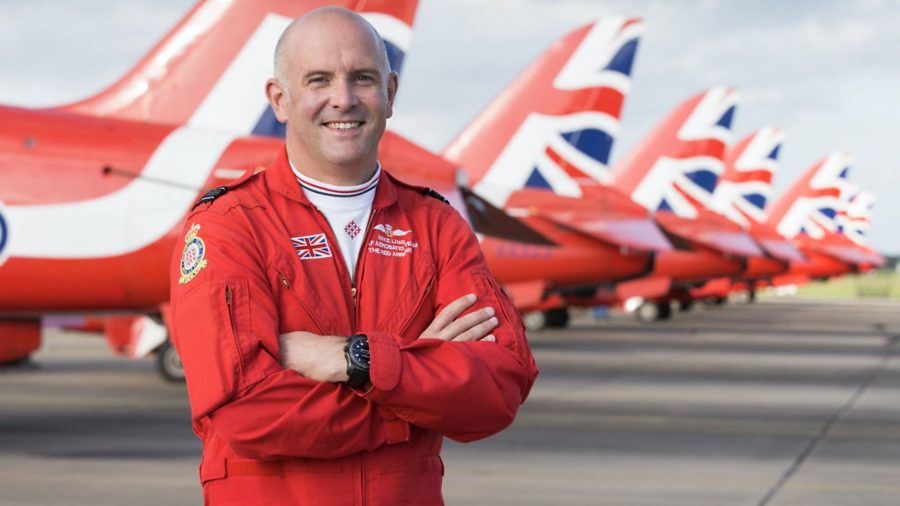 Ling has recently left the Royal Air Force after 21 years service and is now in commercial aviation.

His new role will include helping to establish new funding for the charity, to overview the selection process and to give guidance on flying careers in the armed services to a growing number of NDMFS scholars.

During his career in the RAF, Mike has served as an air defence pilot flying the Tornado F3, including spells as a part of the Quick Reaction Alert force responsible for securing the skies of the UK. He has also served in the Falkland Islands.

He joined the Red Arrows team in 2008 and spent a record ten display seasons with the team. His various duties included supervision and safe execution of team training and displays, also taking the role as commentator and being the ‘voice of the Red Arrows’.

Altogether, he flew 2585 sorties in Red Arrows aircraft, played a part in 700 public displays and flew a red Hawk jet into 46 different countries, as far east as New York and as far east as China.

Mike Ling was awarded an MBE in the New Year’s Honours list published in December 2017 for his services to the Red Arrows Team. His role was subsequently recognised in October 2018 by the Honourable Company of Air Pilots with the Master’s Commendation. He became a Fellow of the Royal Aeronautical Society in March this year

Now in civil aviation, Mike has gained his Air Transport Pilot’s Licence and has joined ‘The Blades Aerobatic Team’ described as the world’s only aerobatic airline. In this role, he will be flying in public displays, also relishing the opportunity to give airline passengers the experience of flying in close formation in a team where all aircrew are former Red Arrow pilots.

Gary Merchant, Chairman of NDMFS Trustees, says that Mike Ling will be a huge asset to the Trust.

“Mike’s enthusiasm is infectious and his knowledge of military flying at the highest level is incalculable. He grew up in Biggin Hill and was inspired by witnessing Red Arrow team displays in the 1990’s, joining the local ATC squadron at the age of 13.

“His flying career will continue to encourage and inspire future generations for many years and we welcome him on board our emerging charity which has already gained a solid track record.”

Mike says that joining the charity as Patron to assist in its development is going to be a new challenge for him.

“Charities that focus on providing flying training for today’s younger generations are becoming increasingly important, especially for those who do not necessarily chose a military career.

“Captain Nick Davidson was a fine example of working slowly towards his professional pilot qualifications by serving an apprenticeship as a flying instructor to build flying hours and experience. He won his spurs the hard way to the flight deck of a British Airways airliner.”

One flying scholarship is being sponsored in 2019 from the NDMFS stable. It will be the Biggin Hill Airport Award, funded for a full course to PPL level funded by Biggin Hill Airport. The lucky winner will be announced in late June.