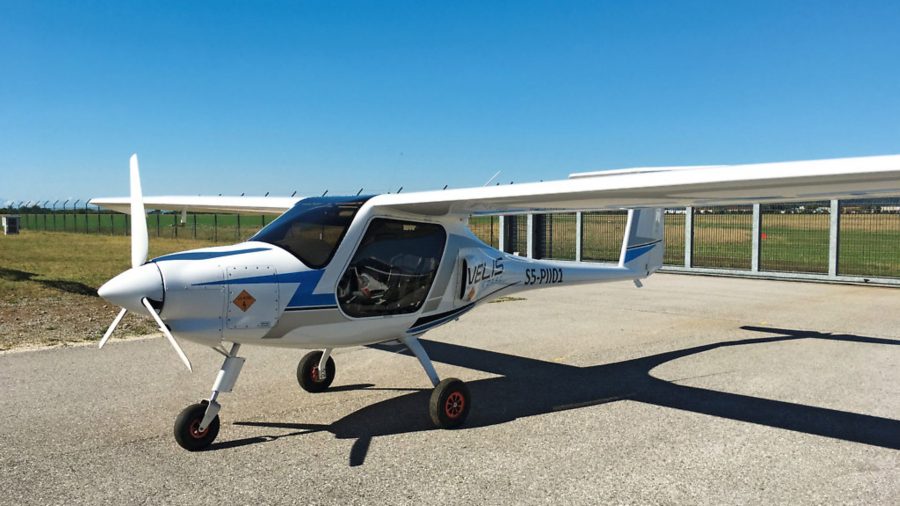 The only unusual thing is the propeller not turning. We are at the holding point for Runway 27, a mere few seconds from starting our takeoff roll, and I’m surrounded by absolute silence. In fact, a couple of large birds are leisurely picking through the grass not far from us, and we might as well be out in a hide, bird watching. ‘Welcome to electric flying,’ I mutter quietly.

Everything up to this moment, on the other hand, has been quite similar to a flight in a piston engine aeroplane. The pre-start, after start and taxying checks are pretty much the same and?yes?there is even a power check before takeoff. It’s just that after this and while we await the word there’s no need for the prop to be turning, since the aircraft is stationary.

This is my first ever flight in an electric aeroplane, and I came here with the question ‘Will the flying be very different from an aircraft with a combustion engine?’ The answer, I am discovering today, is ‘no’. The takeoff roll and the acceleration feel the same as any other 100hp-ish trainer, and so do the rotation and climb. One small difference is that once you are established in the climb you need to reduce power, from takeoff to maximum continuous?49kW (in electric aircraft you set a desired electric power, not RPM or manifold pressure). However, this is not completely alien to me?with the Rotax 912, for instance, you are allowed to use the maximum RPM of 5,800 for no longer than five minutes. As we climb out, I also find that electric flying does not mean reduced performance: at 49kW and 70kt, the VSI indicates a respectable 700fpm, again a figure you would note in an equivalent 100hp trainer.

The early October day on the border between Slovenia and Italy is absolutely stunning, and through the large windows of the high-wing Velis Electro I get some amazing views. Looking south, I can see the Gulf of Monfalcone and its factories, where some of the world’s biggest ships are built. The cockpit is quite spacious for a two seater (wider than a Cessna 152, for instance) and it makes me think that, although this aircraft has been specifically designed to be a trainer, it could be a good tourer too. (Pipistrel believes that within three years the Electro’s endurance could exceed two hours, leading me to think a tourer version may eventually become a reality.)

Remaining in the present, however, we level off to try a few turns. I find the aircraft very stable and easy to fly (so much so that I suspect at one point the altimeter has frozen)?characteristics that should really help students in their initial learning. Given its low mass, I was expecting to find the Electro less stable and more prone to be pushed around by turbulence and gusts. Instead, it feels surprisingly like a much heavier aircraft (but bear in mind that we are flying on an almost windless day with no, or only light thermals).

After a few turns we try some stalls, first clean and then with flaps (in case you were wondering, when you bring back the power lever in the air the propeller does not stop). The deceleration is similar to any other aircraft of its category and stalls are also done the same way (power to idle, maintain altitude until the stall). At approximately seven knots above the stall, a very noticeable stick shaker activates. The stall itself, especially with flaps down, is extremely benign: I do not manage to obtain a clean break with the nose dropping, something that I know some flight instructors would prefer to see in a trainer (but maybe this would be an advantage in circuit training). Also, while adding power to recover from the stall, I do not find the strong P-factor that I was anticipating from the torque of an electric motor. I do however find one feature that I do not like, which is the positioning of the trim switch and the flap lever. The electric trim is controlled by a switch positioned at thigh level between the two seats, directly below the flap lever, where it is not very easy to reach. The flap lever is of the ‘parking brake’ type (as in a PA-28) and, in operation, requires a somewhat odd ‘up-and-back’ shoulder movement. However, when flying a new aeroplane I often find some of the controls less than convenient, and these issues would probably disappear with time as I got used to the Electro.

Next I take a closer look at ‘engine’ management (being electric, the Electro’s should properly be called a motor, not an engine). The equivalent of Ts & Ps are four gauges that indicate the temperature of the motor, the inverter, and of the two batteries. In addition, of course, you have the ‘fuel’ gauge which is the battery State Of Charge (SOC) indicator, accompanied by an equivalent ‘endurance remaining’ indicator. So, in terms of system monitoring, there is very little difference from a piston engine?although, compared to engines with a conventional carburettor, you obviously have the benefit of not having to deal with carburettor ice.

So, in essence, engine management in the Electro is a bit simpler than in a piston-engined aircraft. Another advantage in the Electro is that the power lever controls the power output directly, not simply the mechanical position of the throttle. In a conventional aircraft, you initially set a certain power, but generally have to re-adjust the throttle to hit the desired cruise settings as the speed settles. That does not happen in the Electro. If you want 25kW of power (a typical straight and level setting) you set 25kW by reference the power gauge, and you are done?you will get precisely that power as long as you do not move the lever.

After the airwork section, we head back to the airfield for a few circuits. Here I find the aircraft a bit slippery in terms of speed, something that may help commercial students build energy management skills, and that will help them transition to higher performance aeroplanes. In fact, on my first touch and go I’m too hot and need to go around. That brings to mind a chat that I had before the flight with Pipistrel’s engineers about propeller ‘braking’. Technology to use it as a turbine, recovering excess kinetic energy to recharge the battery, has been developed.Currently pending certification for aviation use, the system will become standard and be available as a retrofit.

On the second approach I remind myself that I’m flying an aircraft with long wings and very good gliding capabilities, and stick more strictly to the descent profile by pulling back the power completely on base, achieving the 65kt target speed on final. The touch-down is normal (the Electro does not float like some long wing aircraft may do) and, after about thirty minutes of electric fun, we are back on the ground. And those two big birds are still there, by the way?a testament to how quiet the aircraft is.

Well suited to the task

Overall, I found the Electro pleasant and easy to fly, and very well suited to be a circuit-flying trainer. It does not differ from conventional piston aircraft in the way it is flown, and my impression is that students could seamlessly transition from one type to the other, and that schools could integrate this aircraft into their existing fleet with little effort.

The greatest advantage of this aircraft, however, is not in the way it flies, nor what it teaches a student. It is in its extremely low operating cost (obviously combined with its low environmental impact). Using £1 of energy per hour instead of £30 is a very big advantage, and it goes quite a long way in solving probably the biggest problem that aspiring pilots and GA have faced over the last few decades: the cost of flying. If you think that saving the environment means higher costs, think again. I would say Pipistrel really has found a way to turn the climate change conundrum into a win-win.