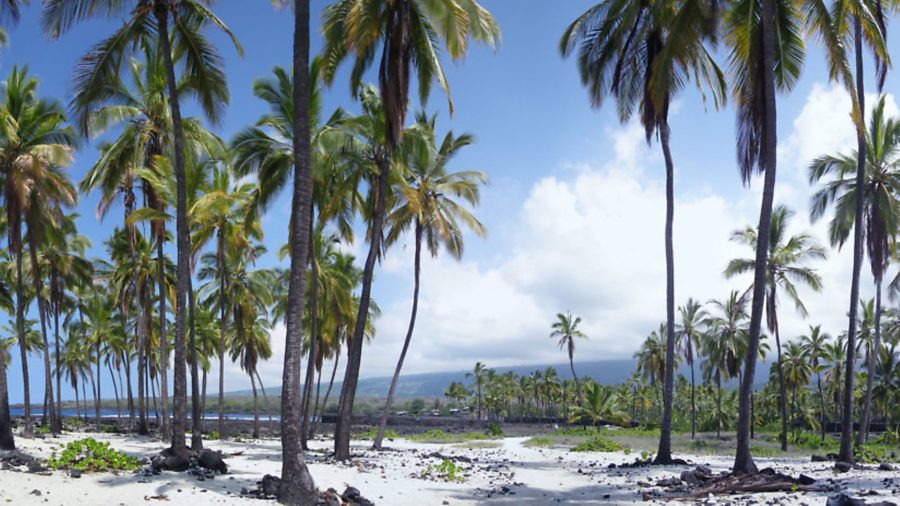 If you like to get away from it all and enjoy stunning scenery, this is about as far as you can get from anywhere

Fifteen hours from London by commercial jet, ten hours behind GMT, 2,500 miles from the nearest continent, on an island having eleven of the world’s thirteen climatic zones… where on earth are we? On Hawaii’s Big Island!

The extraordinary island archipelago of Hawaii is the most isolated in the world. It is composed of six major islands, Big Island being the largest with a 266 statute mile circumference and extinct volcanoes rising up to almost 14,000 feet. Hawaii’s complex human history includes early Polynesian settlement, a period of British occupation from 1776 (reflected in the Hawaiian flag), followed by Euro-American and Asian immigration. Then, after the overthrow of the Hawaiian monarchy, there was a brief period as the Republic of Hawaii, which was followed by admission to the United States as the Hawaiian Territory, finally becoming the 50th state of the USA on 21 August 1959.

Hawaii had always been on my list of places to visit. However, with just twelve days of holiday left, I could only do justice to one or at the very most two islands, if I included two days of travelling out and back from the UK. Hawaii’s Big Island is so huge and has so much to offer that it seemed sensible to spend the whole time there. I decided to stay at several B & Bs around the island to minimise the amount of driving each day to explore the different regions of this amazing place. Hawaii’s weather is fantastic the whole year round so choosing a time to visit was not a problem. I went in September when the coastal temperatures were in the upper 20s centigrade and the tops of the mountains still above zero. In the winter months the peaks have snow on them yet at sea level it’s still pleasantly warm.

As I have a US private pilot’s licence issued on the basis of a valid UK one, this would give me a great opportunity to see the island from the air by light aircraft. I could have gone for a check-ride to clear me for solo rental but instead chose to go up with an instructor whose local knowledge would enable me to see things that I might otherwise miss. Rather surprisingly there are five airports on Big Island: four civil and one military. The international airports of Kona and Hilo are class D airspace, as is Bradshaw Air Force Base located at 6,000 feet above sea level in the valley between Mauna Kea and Mauna Loa. The two other civil airports in the north of the island are Waimea Kohala and Upulo, just north of Kapaau, which are class E and G respectively.

I found a training and rental organisation online called the Hawaii Flight Academy that was based at Kona’s Keahole International Airport (tel: (001) 800-538-7590 or (001) 808-329-0018, www.hawaiiflightacademy.com) and pre-booked a three-hour slot in a Cessna 150 with an instructor. On the day of the flight I arrived in plenty of time to do the usual paperwork but as most of my details were already on file we were out on the apron topping up the fuel tanks in no time. My instructor was called Hawk Rolewicz, a really cool and professional guy; with a name like that you just have to be!

Kona’s International Airport has a lot of commercial traffic from the other Hawaiian Islands as well as the US mainland, so at some times of the day it can get busy; however, at 10 a.m. things were rather quiet. Needing quite a bit less than the full 11,000 feet of runway length available, we lined up and departed from Runway 17 for our anticlockwise circumnavigation of the island. Very little radio communication was required during the three-hour flight other than occasional position reports to Kona and Hilo International airports.

After we left Kona’s controlled airspace we were pretty much free to go anywhere we fancied and soon passed Kailua Kona, the second largest town on Big Island, an ideal tourist base from where to explore the island. From there, one evening, we went on an organised snorkelling trip to swim with giant manta rays that were feeding on plankton attracted to bright underwater lights. It was a great experience to see these huge fish literally inches away as they swam in tight somersaults beneath us in the plankton-filled water.

A few minutes later we flew past the Captain Cook Monument in Kealakekua Bay where, near this spot in 1779, Captain Cook was killed by native Hawaiians. That was just a year after he and his crew had landed on the Hawaiian Islands on 18 January 1778 while attempting to discover the Northwest Passage between Alaska and Asia.

He named the islands the ‘Sandwich Islands’, after the fourth Earl of Sandwich. Another minute or so of flying took us over the lovely historic site of Pu’uhonua o Honaunau, also well worth a visit. This was a place of refuge where the Pu’uhonua protected the lawbreakers, civilians during the time of war and the defeated warriors. No harm could come to those who reached the boundaries of the place of refuge. We visited this lovely location when staying at a B&B in Captain Cook. Just outside the site is a great snorkelling area with easy access from flat rocks.

Pretty much the whole of the central and south-west coastal region is subtropical where tropical fruits and coffee are able to be grown; the local Kona coffee is really delicious too. However, once past the southern end of the island you notice a distinct change in the terrain; gone are the tropical trees which are replaced by fields of lava expunged from Mauna Loa over the millennia. We flew over ancient and extinct cinder cones now covered in grass near the town of Ocean View.

Our routeing took us just offshore where we could see the smoky haze from the ever-active Kilauea volcano. As we flew closer to the Volcanoes National Park we could see how the different lava eruptions over many years were marked by various shades and colours on the barren landscape, and in the distance we could see steam and smoke rising from the very coastline itself. This is ‘Ocean Entry’ where lava pours into the Pacific from underground lava tubes.

Here I handed over control to my instructor so I could get some photos as we orbited over the top. Whilst flying over Kilauea itself is restricted for safety reasons, flight over another smoking cinder cone called Pu’u (often written Puu Oo and pronounced “poo-oo oh-oh”) is not. We headed straight towards it, climbing all the time as the terrain steadily rises somewhat imperceptibly. After flying over deserted houses left isolated by previous lava eruptions, we arrived at Pu’u, a real mini volcano! Several orbits and tens of photos later we headed back to the coast. There were quite a few helicopter sightseeing flights also going on in the area so position reporting on a common frequency was in order.

Cutting inland to pass west of Kapaho we routed around Hilo International airport to fly up the east coast, which is known as the ‘wet’ coast as most of the rain falling on the island falls here. The landscape now turned lush again with an abundance of small rivers, around forty in all with a multitude of beautiful waterfalls. Our flight took us over Akaka Falls, 420 feet high, which we had visited by car a few days earlier.

Continuing up the east coast we passed the little town of Waipio north-east of Waimea. From there no roads can follow the coast, and it’s only from an aeroplane or boat that you can see the spectacular scenery of many deep cut valleys whose rivers have carved their way down to the ocean. They looked like scenes from the movie Jurassic Park!

The final leg of the circular trip took us along the South Kohola coast past the resort beaches near Kawaihae, and back to civilisation. Establishing radio contact again with Kona Tower I was told to call when on long final for Runway 17. Eleven thousand feet of runway that’s also 150 feet wide can do weird things to the runway perspective that you learn to interpret when landing on small airstrips, however, I was determined to do a perfect landing even when thermals rising up from the runway were trying to throw me all over the place! Safely down we taxied back to the ramp to refuel for the next lucky pilot. It was a truly great way to see the island and was made even more enjoyable by taking the instructor along as a speaking autopilot.

So what is the ‘must do’ list for Hawaii’s Big Island? Firstly, rent a 4 x 4 vehicle (SUV) and not a regular car as this gives you access to some of the more interesting roads. Stay at several B & Bs, ideally for two or three nights each so you can explore the local area without an excessive amount of driving. I would suggest staying near Waimea in the north to explore the Kohola coastal areas and the Observatories at the top of Mauna Kea.

Check with your vehicle rental company that you are covered to drive to the top for which an SUV is ideal. The summit is at almost 14,000 feet and it’s suggested that you rest at the visitor centre at 9,200 feet for an hour or so to acclimatise to the altitude before continuing to the top. We really did notice the lack of oxygen at the top so anyone with breathing problems should be very cautious.

Stay around Kailua-Kona on the west side of the island to do some of the fun touristy trips, such as whale-watching, snorkelling with manta rays, and also to see some of the National Monuments as well as that scenic flight from Kona International. Hilo is a great base from which to visit the Volcanoes National Park.

You will probably want to go there on two days as there is just so much to see and do. In the south-east corner of the island, the Puna district, there are some lovely drives along the coast and fabulous natural rock pools at the Kapaho tide pools to swim and snorkel in. Be sure to visit the geothermally-heated pool at Ahalanui too, where some little fish gave me a foot spa! North of Hilo are many waterfalls to visit and trek around, such as the Akaka Falls, Rainbow Falls, Pe’epe’e Falls, and the triple falls of Umauma, to name just a few.

Hawaii is a heck of a long way from anywhere but it’s really worth the effort of getting there, believe me. If I had stayed for a few weeks or longer it would have been worth doing a full check-out for solo aircraft rental so I could have explored the rest of the Hawaiian Island chain. Wouldn’t that have looked cool in my logbook!