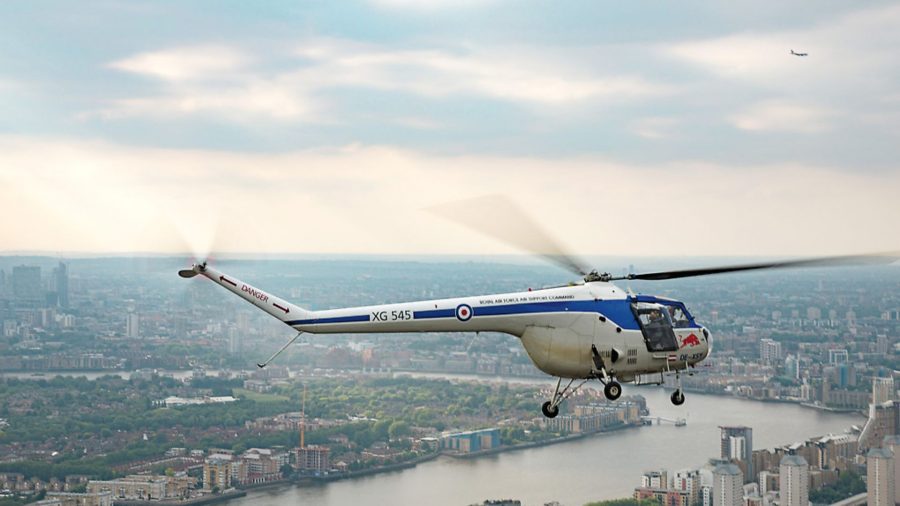 I could tell the Denham controller was having difficulty believing me. “Say again?” he said.

“Bölkow 105 and Bristol Sycamore formation inbound to you from Stapleford, request joining information.” There was a pause.

Another pause. “Whatever you are, join at St Giles left-hand zero six, circuit is clear.”

Not until he got a good look at us on final did he believe. I gave him some non-standard R/T as we crossed the fence. “You see, I was telling the truth,” I said.

You couldn’t blame him. Not for 46 years has a Bristol Sycamore flown over England, and he’d probably never seen one, even in a museum. Having this historic helicopter materialise out of a clear blue sky was a unique experience, and one that may never be repeated.

For this was, of course, the Red Bull Sycamore, OE-XSY on a summer tour of England taking in air shows at Cosford, Fairford and Farnborough, with a two-week residency at the Helicopter Museum at Weston-super-Mare. And I had been invited to fly it down the Heliroutes through London.

Over the years I’ve developed a close and supportive relationship with the Red Bull Flyers?so much so that I got the chance to fly their Cobra in Austria with Chief Pilot ‘Blacky’ Schwarz, along with their Bö105 and Cessna Caravan on floats.

I’ve been following their meticulous restoration of the Sycamore for some years, and had actually seen it fly at their Salzburg base. When they were planning to bring the Sycamore home to England they contacted me for help and information, and one of the things they particularly wanted to do was to fly it along the Heliroutes through London, accompanied by the 105 as a camera ship – they planned to make a thirty-minute documentary film of this historic event.

They wanted me, as a native English speaker who was familiar with the Heliroutes, to accompany them along the Thames, and you can imagine how pleased I was to oblige!

The Bristol Sycamore was the first British helicopter to go into production, although it was designed by an Austrian, Raoul Hafner, who immigrated to England before the Second World War. The prototype flew with a Pratt & Whitney Wasp engine in 1947, and the Mk 2 came out in 1949 with a 550 hp nine-cylinder Alvis Leonides radial engine, mounted horizontally behind the back seats.

Hafner, who had cut his teeth on autogyros with full cyclic control, was a visionary as well as a genius. He provided the Sycamore with three blades on both the main and the tail rotor which, as I was to find, endowed the helicopter with remarkably low vibration levels, even by modern standards.

The Red Bull Sycamore was built at Bristol’s Oldmixon, Weston-super-Mare factory in 1957 for the German armed forces, and served until 1969. After demobilisation it passed through various hands before being bought by Swiss helicopter enthusiast Peter Schmidt.

It was Peter who worked to obtain the requisite permission from Buckingham Palace for the Sycamore to wear RAF colours and roundels. Ironically, the aircraft was never in service with any branch of the British military although, as the only Sycamore flying, it represents the entirety of the type.

Royal permission was granted on the condition that the helicopter would only ever be a source of pride and honour to the RAF, and how could it be otherwise? Peter, who owns a vineyard, sat in the back while we flew through London.

My own Sycamore journey began at Stapleford, but getting the Sycamore there was a long and tortuous process, and I’m not talking about the flight from Austria. In the beginning there were in fact fears that the helicopter could never be made airworthy, particularly because of the wooden blades, which are delicate, hand-crafted works of art.

It was with some trepidation that the blades were sent to the Technical University of Graz for testing. The result was a surprise ? they were deemed to be ‘like new’, even after 61 years.

The Helicopter Museum at Weston provided technical assistance, including supplying archived maintenance manuals. A German Sycamore specialist, Dieter Hasebrink ? a former technician at the German armed forces ? played a significant role in the restoration, with laborious repair work required on many components.

The canopy glass was replaced, the engine was worked on, the avionics, the tanks and the trim pumps all needed attention. (Trim pumps are needed because the Sycamore moves water ballast around as fuel is burned off to keep the C of G within limits.)

Registration was not a foregone conclusion. Type approval was necessary because the Sycamore had never previously been registered by the Austrian authorities, who stipulated that numerous requirements and parameters had to be met.

This proved to be a major challenge because there were no longer any licensed pilots or technicians. A test programme was created together with Austro Control, starting in July 2013 with a fifteen-minute hovering flight, with Blacky Schwarz at the cyclic.

Further flight tests took fifteen hours and included thirty landings. The Sycamore was granted a type approval by the Austrians in 2016 and it was registered as OE-XSY, having previously been on the German register in the 1970s as D-HALD, and on the Swiss register as HB-RXB. It last flew in 2006, and had come into the Flying Bulls possession in 2010.

In June I flew my R22 down to Stapleford to meet Blacky and the Sycamore as it made landfall in England, along with the Flying Bulls’ Bö105. It’s a measure of the professionalism of the Flying Bulls that the 105 pilot, Mirko Flaim also wanted a native speaker on board (despite his own excellent English), just in case we had radio failure… so we arranged to go first to Denham, where Mirko would pick up Hugh Barklem while we had a cup of tea.

Blacky put me into the left seat of the Sycamore ? the first versions were flown from the left, but after the Mk 3 it became the convention that the helicopter was flown from the right. First impressions are of a venerable old machine smelling of oil and leather, with period clocks on a vast panel stretching right across the helicopter and leaving relatively little room for a windscreen.

The controls are conventional except for the collective, which takes some getting used to. There’s only one, situated between the seats, and while it goes up and down like a normal collective, the throttle sticks out perpendicular to the lever and is manipulated fore and aft, like a motorcycle twist-grip.

There are some modern touches ? up-to-date avionics have been installed, and the seats have four-point harnesses – but otherwise the layout is exactly as it was before I was born.

Blacky started the engine, lifted into the hover and had hardly completed the translation to forward flight when he said: “You have control”. We had agreed that because of its position and novelty he would retain responsibility for the lever, as well as the ballast trim, while I did the rest.

The cyclic felt very heavy, especially when compared with the R22 I fly ? almost as though there was a big spring holding it back ? and at the beginning it was quite a trick to get the trim just right. I soon got used to it, however.

One sits well forward in the aircraft so it doesn’t feel as big as it is; the bulk is all behind you, and it responds like a lighter helicopter. It is unquestionably noisy, even with good headphones, as the engine is hard up against the passenger compartment.

I pointed her westward at eighty to ninety knots, and vibration levels were significantly lower than I had expected in such a venerable helicopter. Balancing three wooden blades must be a black art, but the Flying Bulls have mastered it.

Our flight to Denham was over in a few minutes, and turns onto base and final were without drama; I’d got the hang of the cyclic trim. One interesting point: the Sycamore is best landed with a modicum of forward speed, which relieves some of the stress on its tricycle undercarriage.

We had our cup of tea and reviewed the Heliroutes chart with Blacky and Mirko while Hugh called the Denham controller to find out who was working the airspace just inside the Heathrow zone. Today it was Northolt.

The Denham controller appeared to have briefed them on who was coming because we were dealt with expeditiously and with genuine interest. I could imagine them standing in the window with binoculars, keen to witness this unique event.

The plan was zone entry at Northwood for H9, H10 and H4 to exit at the Isle of Dogs and return to Stapleford. We took off, dialled in a squawk for both helicopters and received an immediate clearance to enter at Northwood.

With Northolt in view Blacky said, “Take over, will you?” and began rummaging in his pockets. I took the stick as he produced his camera, and from that point on I flew the remainder of the trip, while he snapped away.

Northolt passed us to Heathrow Radar and we picked up the Thames at Kew Bridge. It takes time to become sufficiently comfortable with a new helicopter to allow your brain to shift a gear, to give you enough spare bandwidth to start appreciating your surroundings and circumstances, but by the time we got over the river I was beginning to marvel at exactly what I was doing, in what, and where: I was piloting a one-off piece of British helicopter history over the capital.

What an extraordinary privilege! We must have been visible to hundreds of thousands of Londoners… what would they think, if they looked up? How many would recognise that a ghost from the past had come to life and flown over their heads?

From Barnes we were cleared to Vauxhall Bridge, then to London Bridge. Blacky kept taking pictures as the Houses of Parliament slipped beneath us, the London Eye, St Paul’s and The City. Eventually we were held at the Isle of Dogs, circling over Greenwich Park while City Airport cleared some traffic, then we were cleared across their extended centreline.

City asked us to expedite. I replied that ninety was the best we could do, and it wasn’t bad for a sixty-year-old.

“It certainly isn’t,” they said, and held their traffic.

We continued up the Lea Valley?over the spot where 110 years ago A V Roe was threatened with arrest for disturbing the peace by attempting to fly the first British aircraft of any type?and back into Stapleford, and I felt a sense of fulfilment such as one rarely enjoys.

It really was the experience of a lifetime, negotiating the Heliroutes successfully and without incident in such a gem of a helicopter, and it’s not until it’s all over that the magic impresses itself on you.

I bade farewell to Blacky and Mirko, who continued their journey to Cosford well satisfied with the film footage they’d taken, and flew Hugh back to Denham in the R22 before heading home.

It wasn’t until later that I realised that I’d been so bedazzled that I’d left my wallet in the Sycamore, and I had to drive all the way up to Cosford the following day to fetch it.

The Sycamore moved on to the Helicopter Museum at Weston-super-Mare, where it was delivered into the care of museum founder Elfan ap Rees.

The museum has two Sycamores on display, neither of course airworthy?in fact the last time a Sycamore flew in Britain was in 1972. But Elfan had the privilege of flying OE-XSY down to the seafront for the Weston Helidays, and for him it was a reunion with an old friend.

He’d flown the same machine in Germany with its first private owner in the 1970s. Elfan adds: “We also flew the aerobatic sequence in the 105?loops, rolls, the works. Another tick on my bucket list!”